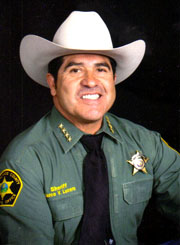 As most are aware, since becoming your elected sheriff here in Los Alamos, I have remained active at our state’s legislature during each session. I want to make the community is aware of my stance regarding some controversial bills that I have been supporting and opposing, and the reasons for my positions.

I will first discuss Senate Bill 22 (SB-22), which is being sponsored by Sen. Michael Padilla. This bill, should it pass, would require a vote of the people to amend our state’s constitution requiring person(s) running for the office of sheriff to have a law enforcement certification, have seven years of law enforcement experience, be a resident of the county they are running in for one year, not be a convicted felon and not have been recalled from public office.

I will now discuss my positions on Senate Bill 48 (SB-48) and House Bill 50 (HB-50) sponsored by your Sen. Richard Martinez and your Rep. Stephanie Garcia Richard respectively. These are mirror bills being introduced on both sides in an effort to get them on the floor. These bills would require background checks for private transfers of firearms.

The New Mexico Sheriffs Association opposes these bills for the following reasons. These bills would make it more difficult for law-abiding New Mexicans to exercise their Second Amendment rights, waste scarce law enforcement resources, and do nothing to keep firearms out of the hands of criminals. These bills would criminalize virtually every private transfer to include our youth being instructed on firearm safety, our ranchers working out on the range utilizing shared firearms between work hands and our hunters who frequently loan friends and neighbors hunting rifles to harvest game.

Persons supporting this bill have argued that this bill would prevent the so called “Gun Show Loop Hole”, yet nowhere in the bill does it even mention gun shows. I would like to point out that to purchase a firearm at a gun show, you do have to adhere to a background check.

Persons supporting this bill have have argued that this bill would prevent violent gun crimes. Let’s look at the crime statistics from states that have adopted similar legislation. Dr. John Lott Jr., found in his research, that these states have an increase in their murder rates of 49 percent and robberies increased by 75 percent.

It is the position of the New Mexico Sheriffs Association that these bills would be un-enforceable without creating a gun registry.

As your sheriff and having worked in the law enforcement profession for 29 years, I know that criminals will always find a way to get their hands on firearms, and that 87 percent of guns used in violent crimes are stolen from homes or vehicle burglaries.

Regardless of your position regarding these bills, I would encourage you to contact Sen. Martinez at richard.martinez@nmlegis.com or 505.747.2337 and Rep. Garcia Richard at stephanie.garciarichard@nmlegis.gov or 505.986.4846 to make them aware of your stance on these bills.