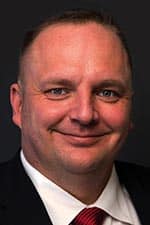 A lawsuit filed against Los Alamos National Security by Republican nominee for Los Alamos County Sheriff James Whitehead, has been slated for a pretrial conference more than a year from now.

Whitehead filed the complaint Sept. 11 in which he alleges breach of contract, implied covenant, good faith and fair dealing, retaliation, false and prima faciae tort grounded on wrongful treatment he said he received as an employee of LANS.

As an engineering technologist at LANS since 2011, mainly focused on fire safety and related systems engineering, the suit states that Whitehead received good performance reviews and was recognized for performance awards. Also, that part of his job responsibilities requires him to maintain an active high security Q clearance vetted by the Department of Energy and that he has had no security infractions during his tenure of employment.

Whitehead‘s suit alleges that during the course of his employment, in the line of his assigned duties he “identified serious safety issues, which resulted to delays to a significantly behind schedule and over budget project of great importance” and he cites two incidents in 2014 and 2015. In his concern for the “overall safety for the nuclear facility”, Whitehead emailed his managers Feb. 26, 2015, according to the suit.

“A few days later his supervisor requested he meet with him and his division leader to discuss his email and ‘unacceptable behavior’. In this meeting despite his previous tasking, Whitehead was told to leave all things related to fire doors alone and to mind his own business. Whitehead had several meetings like this with his supervisor and division leader in which decisions had been made without any considerations for Whitehead’s professional assessment and the account of the events. These meetings were nothing but ‘woodsheddings’,” the suit states.

Whitehead claims in his suit that LANS managers were aware that he suffers from Post Traumatic Stress Syndrome (PTSD) as a result of earlier traumatic experiences, yet they employed an aggressive “in your face” management style that included berating and yelling at him in public in meetings as well as behind closed doors.

He states that in March 2016, LANS announced that a new facility operations director had been appointed and that “this was direct result of many fire suppression issues impacting operability and facility safety”, which Whitehead said he had identified and/or did not agree with their proposed solutions that were not permitted by standards and Department of Energy requirements.

“As the systems engineer for both fire suppression systems, Whitehead was blamed for the facilities failures and targeted for retaliation from the management team,” the suit states.

“In September 2015, the DOE local security received information concerning Whitehead alleging that ‘he blows up at people and antagonizes others in the organization’. The informant also incorrectly reported that Whitehead was ‘bipolar’.

In order to address these concerns, Whitehead was required by DOE to undergo a personal security interview and submit to a DOE-sponsored forensic psychological evaluation (PSI). Because the PSI and psychological examination did not resolve these concerns, his security clearance was suspended, and he was issued a LANS identification badge, which identified him as Uncleared-Non-Escortable,” the suit states.

Whitehead alleges that at his request the DOE began an administrative review proceeding. Testifying at the proceeding on Whitehead’s behalf was a representative of the LANS Employee Assistance Program who had been working with Whitehead on a regular basis, an independent and forensic psychologist who met with Whitehead and on several occasions, administered three standard psychological tests and reviewed both the DOE psychologist report and test results and Whitehead’s treating therapist, the suit indicates.

“All were in agreement that Whitehead posed no threat to security at LANS. The DOE psychologist testified and concurred with the other professionals. The DOE hearing officer determined there was no basis for the report made and Whitehead’s security clearance was restored,” the suit states.

Although Whitehead’s clearance was restored, the suit says that as a result of his temporary loss of clearances, management informed him that his previous position at LANS was no longer available. It says Whitehead sought and accepted a position providing services to another section at LANS, however this section has uncertain funding and Whitehead’s current management in charge of allocating tasks and funding is well aware of Whitehead’s being identified by previous management and supervisors as creating friction or turmoil in the workplace due to his actions to ensure what fire safety and security plans. It states that Whitehead’s reputation precedes him and “for lack of a better word, he is and continues to be blackballed at LANS destroying his job security”.

“On the basis of information and belief LANS personnel were motivated by Whitehead’s identification of serious safety issues, which resulted in delays to a significantly behind schedule and overbudget process of great importance to LANS assigned mission. Defendant’s outrageous and extreme misconduct has caused and is causing Whitehead to suffer loss of past, present and future benefits, damaged reputation and future prospects of employment advancement,” the suit states. It claims that as a result of LANS’s wrongful conduct, Whitehead “has suffered emotional distress damages evidenced in part by a loss of sleep, shame, humiliation, embarrassment, stress, stomach aches and anxiety”.

Whitehead claims LANS management wrongfully and without proof reported that he was “bipolar and a threat to security when there was no evidence of such claim” and that LANS treatment of him “ultimately resulted in the loss of his security clearance and placed him in a false light in the public eye as being an unstable, of questionable character and otherwise worthy of such treatment”.

“This was done to maximize damage to Whitehead’s reputation and possibly result in his removal from the LANS facility or his termination from LANS because his security clearance was permanently revoked,” the suit states. “Such conduct by LANS was known to be unjustified under the circumstances. As a direct result of LANS’s wrongful acts, Whitehead has suffered and continues to suffer emotional and physical distress and suffering and other damages.”

Editor’s note: LANS does not comment on personnel issues or pending litigation.