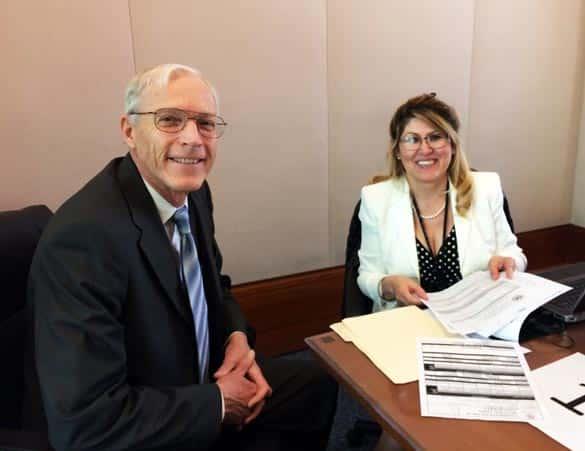 Tuesday I filed my candidacy with nominating petitions signed by hundreds, to become a candidate for the Democratic Party nomination for New Mexico House of Representatives, District 43.  I’ve knocked on doors and listened to citizens throughout this diverse District, from La Cienega and western Santa Fe in Santa Fe County, to Jemez Springs and Cuba in Sandoval County, to Gallina in Rio Arriba County, to Los Alamos and White Rock in Los Alamos County. Many signed my petition and encouraged my campaign, because we need better government for this State.

I am a retired physicist.  In my six years on the Los Alamos County Council, I’ve taken a scientific approach to make our government better: gather facts, analyze, communicate, and make balanced decisions based on fact and science.

Growing up in a working class family in California, my sisters and I had access to good affordable public education, and this served us well.  One became a librarian, the other a teacher.  Their jobs didn’t pay well, but their health benefits became important especially when one of my sisters spent the last ten years of her life with Parkinson’s Disease.

I first got a B.A. in Aesthetic Studies, my wife Naishing’s favorite of my degrees, then served as an enlisted man in the Air Force, went back to school, and eventually earned a Ph.D. in Physics from UCLA.   I came to New Mexico in 1986, and have had a good life here: well-paid, interesting work while living in a beautiful place.  We’ve earned enough to help out our families, and also welcomed a teenage nephew into our home to attend Los Alamos High School and now college.

After retiring from the Lab in 2012, I have served on County Council for the last 6 years.  I use the skills of an applied scientist to do the job.  I am an active participant in the planning for our Department of Public Utilities to achieve the goal of providing 100% carbon-neutral electricity to our town by 2040.  I have publicized facts about our water supply and forest preservation issues, which have helped the county make good policy in these areas.

I convinced the county to join the Rio Grande Water Fund, a big public-private group working successfully to restore the health of northern New Mexico forests to resist forest fires and save our watersheds.  Our fire department has become very active in forest thinning and educating the public about this.

Life’s gotten a lot harder these days for many people in this State.  We’re seeing more crime, drug addiction, and teenage suicide; health care and education are getting increasingly expensive; and our state’s economy is not doing very well. We can fix these problems.  We need:

These things cost money, but if we do them right, we’ll save money in the long run, and our economy will grow.  Other states spend more than we do on prisoner rehabilitation and job training; but when their prisoners are released, they are less likely to go back to jail, saving money and lives.  The countries of Western Europe spend much less per capita than we do on health care, but they cover everybody as well as, or better than, we do.  We can learn from these examples.  Healthy, educated people, in a healthy environment, have the tools to give themselves and our state a brighter future.

I’ve been active for over a decade for progressive causes, and I know how to advocate effectively at the Roundhouse.  I’ve met many legislators in my work on the Boards of the NCRTD, NCNMEDD and NMAC, and with the NMML.  I have used those contacts and skills to help get important bills passed.

To make real progress on any issues, we need complete transparency and reasonable contribution limits for campaign financing.  Without those reforms, big corporate money will continue to push for private interests, and pollute the needed public debate.

Take a look at my website, petesheehey.com, and tell me what you think.  I would be honored to serve as the next State Representative from District 43.