Sept. 29 Fall Fiesta and Mozart on the Rocks: A Big Day at Bandelier 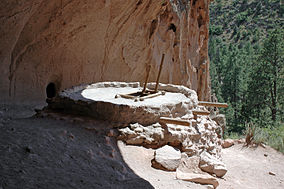 From 11 a.m. to 4 p.m., Sept. 29, Bandelier National Monument is reviving the annual Fall Fiesta so visitors may enjoy Pueblo and Hispanic cultural demonstrations, games, traditional dancing and arts at the park.

The Fiesta was not held in 2011 due to recovery efforts from the Las Conchas Fire and subsequent flooding. This year’s theme is “Celebrating Nature through Art and Culture.”

Entry to Bandelier will be free that day, which is National Public Lands Day.

Bandelier National Monument is making an effort to reach people from Latino communities in the area to invite them to the event, which is the final stop of a month-long scavenger hunt for youth from neighboring communities.

Bandelier and surrounding areas have been part of the tapestry of rich Pueblo and Latino cultures for centuries, which this event celebrates.

Visitors to the Fiesta will need to park in White Rock at the new White Rock Visitor Complex on N.M. 4, which will have opened the previous day.

They will then take the free Atomic City Transit shuttle to the park. Shuttle service begins at 9 a.m. and runs until 6 p.m., every 15-20 minutes.

This first-ever event is an opportunity for those not familiar with opera to participate in an introductory experience, as well as for opera aficionados to enjoy listening in a special venue.

The performance will be held at 6:15 p.m., after the Bandelier Fall Fiesta, at the Monument’s amphitheater.

The opera event begins at 4 p.m. with tailgating at the new White Rock Visitor Complex. Then, starting at 5 p.m., Atomic City Transit will transport guests to Bandelier with an introduction to the evening’s performance provided by the Los Alamos Opera Guild while in transit.

At the Bandelier Amphitheater, a complimentary wine tasting will be hosted by the Don Quixote Distillery & Winery. The performance will include The Three Sopranos, Jess Cullinan and Heather McCulloch coordinated by local opera singer Alicia Soloman, and accompanied by pianist Brian Huysman.

They will present selections from Mozart including pieces from the Magic Flute, Marriage of Figaro and Cosi fan tutte.

Media wishing to attend the Fall Fiesta may drive to Bandelier National Monument, and park in the area designated for Staff and Media in Frijoles Canyon, approximately one quarter mile above the Visitor Center area.

For the opera event, media may park at the Amphitheater at Juniper Campground near the park entrance. For further information about the Fall Fiesta, contact Rod Torrez at 505-672-3861, ext 511.