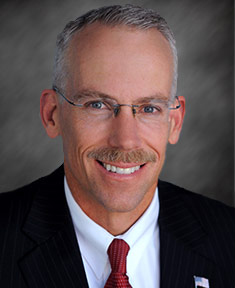 Secretary Fouratt was appointed by Gov. Susana Martinez and began overseeing the Department of Public Safety March 15, 2014. He has a highly qualified background equipping him to lead the Department of Public Safety. He served as a prosecutor at the United States Attorney’s Office in New Mexico for 17 years, prosecuting the full range of narcotics, firearm, racketeering, immigration and violent crimes, including death penalty prosecutions.

January 2008 to May 2010, Secretary Fouratt served by appointment of the U.S. District Court as United States Attorney for New Mexico. In that capacity, he was the chief federal law enforcement officer in New Mexico. His tenure as United States Attorney was headlined by significant public corruption investigations and prosecutions, as well as a surge in prosecutions designed to enhance Southwest border security.

In addition to his service in the Department of Justice, Secretary Fouratt also is a military veteran. From 1988 to 2012, he served on active duty in the United States Air Force, in the Air Force Reserve, and in the New Mexico Air National Guard. He retired in September 2012, with the rank of lieutenant colonel.