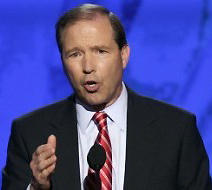 “Our nation’s military readiness relies on the quality of our people, their equipment, and our facilities. This legislation makes important investments in the future of New Mexico’s military bases supporting the people and communities who work there,” Udall, a member of the Senate Military Construction and Veterans Affairs Appropriations Subcommittee said.

“Our veterans made great sacrifices for this nation, and they rely on the quality of the care we provide. This bill provides adequate resources for our VA system and most significantly includes a detailed plan and major funding increases to address the severe backlog in claims processing affecting veterans in New Mexico and around the nation.”

As a member of the Senate Appropriations Committee, Udall voted late last week in favor of $10.7 billion in military construction expenditures including $148.25 million for construction projects at Cannon AFB, Kirtland AFB and Holloman AFB.

Udall successfully included language in the appropriations bill to improve care for veterans across the nation and New Mexico. Notably, the committee urged the VA to detail its implementation efforts for the Open-Air Burn Pits Registry, improve and present a plan for increasing outreach to veterans and their families affected by open-air Burn Pits and an explanation of how the VA plans to inform VA physicians about the findings of the registry to improve care for our veterans. The report requires the VA to present its plan within 60 days.

In order to better understand the needs of rural VA Community-Based Outpatient Clinics, Senator Udall also included language which would require the VA to conduct a full assessment of all VA CBOCs in rural and highly rural areas. In a constrained budget environment, it will be helpful for the committee and VA to better understand and identify priorities for possible expansions, and improvements at VA CBOCs in order to better serve rural veterans.

Udall, along with Senator Reed (D-R.I.) also included language in the bill that urges the VA to work with state, local and tribal governments and libraries to find ways to assist claims submissions from rural veterans who lack broadband internet.

The Military Construction and Veterans Affairs FY 2014 Appropriations bill funds $158.8 billion for the construction of facilities critical to our nation’s military and quality of life for U.S. military personnel and their families. It also provides for veterans medical care and benefits and for VA facilities throughout the country.