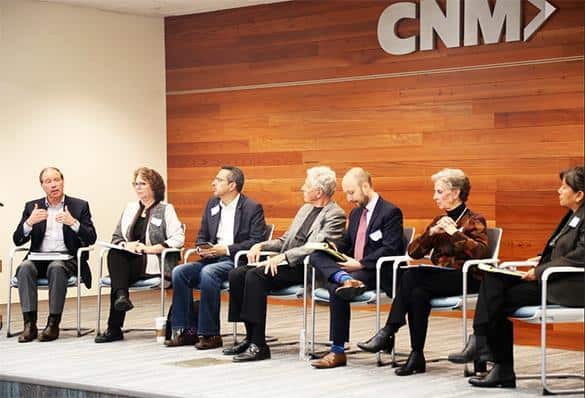 ALBUQUERQUE – U.S. Sen. Tom Udall held a forum Saturday on the For The People Act, his landmark legislation to reform democracy, at Central New Mexico Community College where he discussed his efforts to enact sweeping legislation that will fight corruption, fix broken politics and make government work for all Americans.

During the forum, Udall moderated panel discussions on campaign finance reform and voting rights with a host of policy experts, community advocates, elected officials, and pro-democracy champions from a range of nonprofits and civic organizations.

Udall and the panelists discussed legislative strategies for ending the dominance of big money in politics and ensuring access to the ballot box, while answering a series of questions from the audience on how to fix our broken political system.

“I believe our democracy is at a crisis point. In all my years in public office, I have never been more concerned,” Udall said. “Today, in this country, there is a deep disconnect between what the American people are demanding from their leaders and what the president and Congress have been giving them… We are a representative democracy — yet the people are not being represented.”

“Some of our most basic democratic institutions are broken — our voting rights system, our campaign finance system, our ethics rules,” Udall continued. “I’ve been working on these reforms for years. And I’m now leading the charge in the Senate, where I introduced the For the People Act… These reforms will help bring political power back to the hands of everyday Americans, where it belongs.”

“This fight is the difference between big dark money versus people power, and this change is going to come from the people power. We’re so lucky to have a congressional delegation in New Mexico that’s driving this fight forward, especially Senator Udall’s leadership with the For the People Act,” said Common Cause New Mexico Executive Director Heather Ferguson.

“The For The People Act would be transformative for our democracy. It’s critical that we fight to get it enacted. At the Brennan Center, we’re grateful for Senator Udall’s leadership in fighting for this bill,” said Max Feldman, counsel in the Democracy Program at the Brennan Center for Justice.

“We need a grassroots movement and the people have to get involved. The For the People Act would give the government the power to effectively reform campaign finance laws and put power back in the hands of the people,” said John House, president of New Mexicans for Money Out of Politics.

The For the People Act is a sweeping package of pro-democracy reforms that aims to make it easier, not harder, to vote; end the dominance of big money in politics; and ensure that public officials work for the public interest. The bill serves as Senate companion legislation to H.R. 1 in the U.S. House of Representatives, which passed the House in March of this year. It builds off of Udall’s We the People Democracy Reform Act of 2017, which was introduced in the 115th Congress as a comprehensive reform package encompassing a number of bills championed by Udall and others to address various shortcomings in our political system, and strengthen and revitalize our democracy.