Seeing the Color of Disease 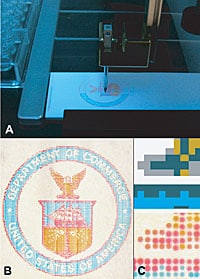 Microarrayer machines (A) now can mix colors and deposit them on microscope slides, which can be used to calibrate hyperspectral imagers (HSI) for use in medical applications. The finished slides can be custom-colored (B) to calibrate HSIs to find specific types of tumors or disease tissue. Close up, they resemble dot-matrix printwork (C). Credit: Clarke/NIST

A powerful color-based imaging technique is making the jump from remote sensing to the operating room—and a team of scientists* at the National Institute of Standards and Technology (NIST) have taken steps to ensure it performs as well when discerning oxygen-depleted tissues and cancer cells in the body as it does with oil spills in the ocean.

The technique, called hyperspectral imaging (HSI), has frequently been used in satellites because of its superior ability to identify objects by color.

While many other visual surveying methods can scan only for a single color, HSI is able to distinguish the full color spectrum in each pixel, which allows it to perceive the unique color “signatures” of individual objects.

Well-calibrated HSI sensors have been able to discern problems from diseases in coral reefs to pollution in the atmosphere as determined by the distinct spectral signature at a location.

“Because diseased tissues and cells also have distinct spectra, scientists have been trying to use HSI for medical applications as well,” NIST physicist Jeeseong Hwang said. “But any time you tell a machine to scan for something, you need to be sure it is actually looking for what you want, and you have to make sure that the image analysis algorithm extracts the correct color information out of a complex multicolor data set. We decided to create a way to calibrate an HSI device and to test its algorithm as well.”

Matthew Clarke, a former National Research Council-supported postdoctoral fellow in Hwang’s group who is currently working in the National Gallery of Art in Washington, D.C., wrote new software for a device called a microarrayer, so named because it is capable of laying down hundreds of tiny sample droplets in specific places on a microscope slide’s surface.

Normally a microarrayer creates DNA arrays for genetic research, but the team remade it into an artistic tool, programming it to select chemicals of different hues and lay them down on the slide’s surface.

The results, which look a bit like dot-matrix printing, can be used to calibrate medical HSI devices and image analysis algorithms.

When combined with HSI in a medical imaging application, this effort could allow a surgeon to look for cells with a specific chemical makeup, as determined by the cells’ color.

“Scientists and engineers can create a custom slide with the exact colors representing the chemical makeup they want the HSI devices to detect,” Hwang said. “It could be a good way to make sure the HSI devices for medical imaging perform correctly so that surgeons are able to see all of a tumor or diseased tissue when operating on a patient.”

This project is part of a larger effort to evaluate and validate optical medical imaging devices, led by the NIST team members, David Allen, Maritoni Litorja, Antonio Possolo, Eric Shirley and Jeeseong Hwang. Hwang adds that the special issue** of Biomedical Optics Express in which the team’s findings appear is the output of a recent NIST-supported international workshop on the topic.