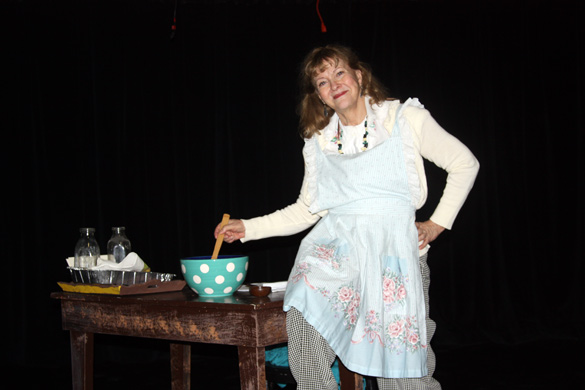 A newly revised short play, “Sunrise at Otowi Bridge” by Los Alamos playwright Robert Benjamin is one of the highlights at this year’s ScienceFest.

Benjamin originally wrote the play in 1994. It’s about Edith Warner, the famous “Woman at Otowi Crossing,” who has been the subject of several biographies and novels. In a stirring one-woman performance as Edith, Pat Beck rises to the challenges of being the center of everyone’s attention for 30 or so minutes. At Friday’s preview performance, she made Edith bloom before us.

The play is directed by Alix Hudson, with production assistance by Kate Ramsey. Sound effects noted in the script are performed by percussionist Kip Bishofberger. The play is partly epistolary, consisting of Edith’s letters to a friend back home in Philly. It also contains Edith’s interior monologue as she ponders her life beside the Rio Grande.

Warner is an iconic figure in the history of Los Alamos. Originally from Philadelphia, Warner found her spiritual home at Otowi Crossing, where the road to Los Alamos crosses the Rio Grande. She became close to the residents of San Ildefonso Pueblo through her friendship with Tilano, whose world travels have somewhat estranged him from the Pueblo, making him, like Edith, something of an outsider, straddling two worlds.

Another close friend is Peggy Pond Church, daughter of Los Alamos Ranch School founder Ashley Pond and wife of a teacher at the school. When World War II shuts down the Ranch School, Warner loses her job as station master for the Chili Line stop that serves Los Alamos. But her small tea room saves the day, as she is asked by the mysterious new residents of the Mesa to keep it running as a getaway for the staff of the secret military facility

Soon she’s become close to many of the most famous scientists of the age, at work on the Manhattan Project under assumed names like “Mr. Farmer” (Enrico Fermi) and “Mr. Baker,” Niels Bohr, and especially with J. Robert Oppenheimer.

Edith writes to her friend, “These civilians are a most remarkable combination of seriousness and boy-like enthusiasm. I sense their enormous determination to win the war, although they talk only roundabout of their work, using odd and amusing terms such as ‘gadget,’ ‘shakes,’ and ‘jerks.’ Yet they often express an excitement about what they’re doing, as if they’re on to something … magnificent. Mischievous boys engaged in playful exploration, yet grown men.”

A glowing red ball in the south one morning makes her wonder if it’s connected to her friends from the Hill. The mystery is soon cleared up by the dropping of the first atomic bomb on Japan. Gratitude for the end of the war and fear of what the atomic future may bring, pride in her friends from the Hill and fear of what they’ve unleashed mix together in Edith’s thoughts.

Why is Edith Warner such an iconic figure in the history of Los Alamos? Possibly, it is because she brings together so much of its life and history. This is made clear at the end of the play, when friends from the Pueblo join scientists from the Hill in building Edith a new house. Like the Otowi Bridge near her home, she brings Los Alamos and the rest of New Mexico into contact.

Don’t miss this performance, which humanizes events of the Manhattan Project. Edith’s famous tea room recipe for chocolate cake will be served at the close of the performance!

“Sunrise at Otowi Bridge” will be performed at the Los Alamos Little Theatre, 1670 Nectar St. at 1 p.m. and 4 p.m. Friday, July 17 and Saturday, July 18. No reservations are needed for these free performances.