‘Secondary Cause Of Death’ Opens At LALT March 16 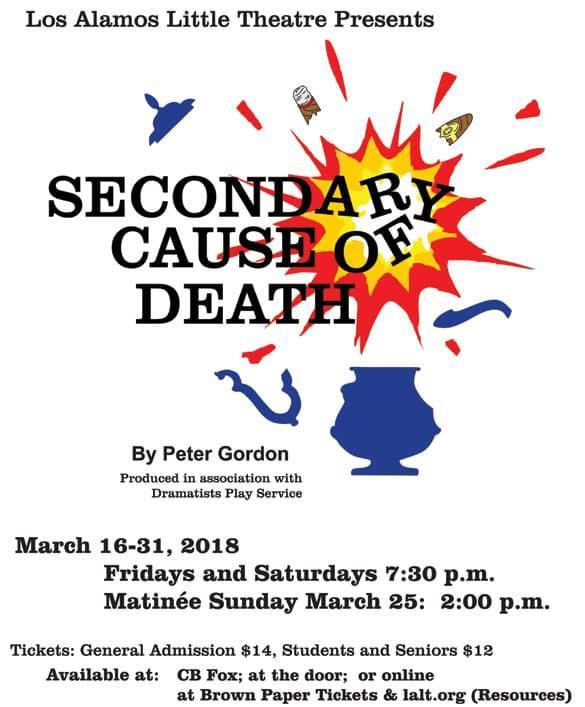 Finally, thespians will stage the much anticipated sequel, “Secondary Cause of Death,” at 7:30 p.m. Fridays and Saturdays March 16-31, and a matinee at 2 p.m. Sunday, March 25, at the LALT Performing Arts Center at 1670 Nectar St.

Tickets at $14/$12 for students and seniors are available at CB FOX, online, and at the door 30 minutes prior to performances.

It’s 1939, and Colonel Charles Craddock has inherited Bagshot House, the setting for “Murdered to Death,” which he has remodeled into a hotel. Craddock is less than charmed to welcome Inspector George Algernon Pratt, who arrives once again, this time delivering to the Colonel unfortunate news about his mentally unhinged wife. Very soon after, Pratt becomes ensnared in a dangerous and labyrinthine whodunit.

Questions ensue and almost nobody escapes suspicion: Who is the enigmatic Polish count? Is Henrietta really an Army captain? Where does the colorful thespian Cardew Longfellow fit into the picture? And since this is 1939, where does Hitler fit in? Joan Maple’s less famous sister Cynthia, the housekeeper, Intelligence agents, and double-agents keep the plot spinning out of control in the best possible way.

“‘Secondary Cause of Death’ is a madcap, deliriously funny, farcical comedy,” said Director Linda Taylor. “It is 100-percent pure English silliness. We have a plot within a plot and a play that is a play on words and no one is whom they seem — or are they?”

Taylor said that in addition to its cast of “ridiculous” characters, it’s full of special effects, music, and dancing, and will have a “cosy melodrama-type feel,” with snacks and drinks.

“I have waited three years to direct this particular  show after I was cast in the first installment, ‘Murdered to Death,’ three years ago,” she said. “Peter Gordon is actually from my hometown of York, in Yorkshire in northern England, so I feel connected with his sense of humor and hope to do him proud bringing some of that to the stage here in Los Alamos.”

Heading up the cast is the irrepressible Inspector Pratt, played by John Gustafson, who was Pratt in “Murdered to Death” as well. Taylor described Pratt’s character as “a little bit Inspector Clouseau, a little bit Mr Bean, and a whole lot of John. Pure comic genius. Frankly, we are all having a hard time rehearsing without cracking up.”

Gustafson said that Pratt — or perhaps this is Gustafson as Pratt talking — “has a finely honed defective brain, abominable fortitude, and an amplitude for important under-the-covers work.” In other words, “Pratt is a blustering buffoon, so it is wonderful to be able to act as myself onstage.”

He added that Taylor is pulling out all the stops with an “abundance of sight gags to accompany all the wacky dialogue and action. Audiences will need to see the play more than once to catch all that is going on.”

Don Monteith plays Colonel Charles Craddock and Cardew Longfellow, “a poncy twit actor hired because he looks like the Colonel.”

He said that when Taylor called to see if he was going to audition, “it was near impossible to resist her enthusiasm. The woman directs at a mile a minute, which would be irritating if she wasn’t also obviously having such enormous fun doing it. Her joy and enthusiasm are actually kind of infectious.”

Craig Taylor plays Count Puchlick, a Polish count who “uses the English predilection toward discussing the weather to try to fit in,” Taylor said. The count has some pretty big secrets, but “generally, he drinks too much to be very secretive.”

While Taylor actually tried out for the part of Longfellow, “following years of typecasting, I once again landed the part of the most insane person in the play.”

He added that this will be his first time on stage where he has to do everything his wife, Linda, says.

Alex L’Esperance plays her favorite role to date as Captain Henrietta Woolmer-Cardington — “that’s the Hampshire Woolmer-Cardingtons, not the Essex,” she said, adding that she decided to audition after sharing the stage with Linda Taylor in “Communicating Doors” earlier this season.

“She had me read the play and I fell in love with it,” L’Esperance said. “I have always enjoyed a good murder mystery and this one definitely keeps you guessing until the very end.”

In his first-ever portrayal of a female character onstage, Miles Ledoux plays Cynthia Maple, “a designer and runner of murder mystery party games — which is a coincidence, since that’s what I do in real life,” Ledoux said, “though I sincerely hope I’m not as bossy and obnoxious about it as Cynthia is.”

Ledoux said that Cynthia and Pratt share abrasive personality types that makes others want to avoid her.

“The difference between Cynthia and the inspector,” he said, “is that while Pratt is completely oblivious to the mishap and grief he causes, Cynthia is perfectly aware of her effect on people, and simply doesn’t care.”
Jessica Fry, new to the LALT community, plays Nurse Parsley, the kind of nurse who “makes the audience wonder is she really there to take care of the patient or is she plotting something much more sinister.”

Pat Beck said her character, Lady Isadora Pollock, “is elegant but you’ll notice a quirkiness about her that evolves over the course of the play,” Beck said.

Beck was the first to be murdered in the “Murdered To Death,” and said she wanted to be part of the zaniness again as a living character. Additionally, “having worked with Linda Taylor on Nana’s Naughty Knickers, I knew this play would provide me with another chance to develop under her tutelage and have a great time while doing it.”

Trish Ebbert plays Lily the cook, “a tenacious force who speaks her mind,” Ebbert said. “As the plot thickens, she isn’t really as daft as she first appears to be.”

She said that despite a lot of laughter at rehearsals, “everyone is working hard to make this a wonderfully fun time for the audience. Our director, Linda Taylor, has a very creative mind and has a wonderful way of drawing out the characters in each of us.”

As for Taylor, she credited her “absolutely fabulous hard-working crew who are fearless in the face of such silliness,” as well as Producer Christine Weaver, who she said “has done all the hard work while I have been simply enjoying myself. There is nothing better than creating something from nothing and seeing it come to life and then — my favorite part — listening to the laughter of people having a good night out.”