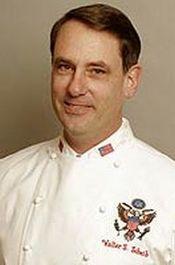 TAOS – Search and Rescue workers located the body of Walter Scheib Sunday evening in the expanded search area where he went hiking June 13 near Taos.

Scheib was the White House executive chef from 1994 until 2005 and had recently moved to the area. His body was discovered approximately 1.7 miles from the base of the Yerba Canyona Trail.

The New Mexico State Police coordinated a search and rescue mission that involved numerous agencies and resources after a family member reported him missing June 16 to the Taos Police Department.

Scheib’s vehicle was discovered June 16 in a parking area at the Yerba Canyon Trailhead off N.M. 150 north of Taos. Deputies from the Taos County Sheriff’s Department responded and began an initial search for Scheib. The search yielded no results. The New Mexico State Police was contacted in the evening hours of June 16 and officers responded to the area.

The New Mexico State Police contacted the New Mexico Search and Rescue (SAR) coordinator and efforts began to initiate a SAR mission. Because of the late hour and darkness covering the terrain, the SAR mission would begin the following morning.

New Mexico SAR volunteers and coordinators began an active ground search mission June 17. New Mexico State Police aircraft flew search patterns in the area and reported thick vegetation was preventing them from seeing into the trails. Deep canyons were also hindering the search at lower elevations.  The night, the search was suspended because of terrain.

Ground search continued June 18. All air search was suspended due to thunderstorms in the area. That evening, data was provided from Scheib’s cell phone, which revealed his phone’s last updated location was in the search area around 3 p.m., June 13.