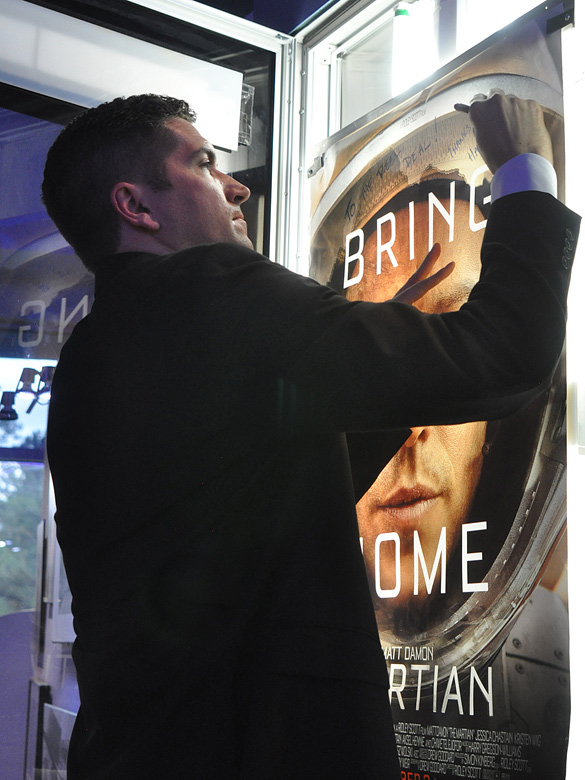 Drew Goddard signs the poster for ‘The Martian’ in the lobby of the Real Deal Theater Sunday night in Los Alamos. Photo by Jim O’Donnell

The movie has had the biggest opening in October yet seen for a film in the United States.

Many family members and friends were among the audience and Goddard laughed as they shouted out memories of his youth in Los Alamos and he responded with stories of his own. 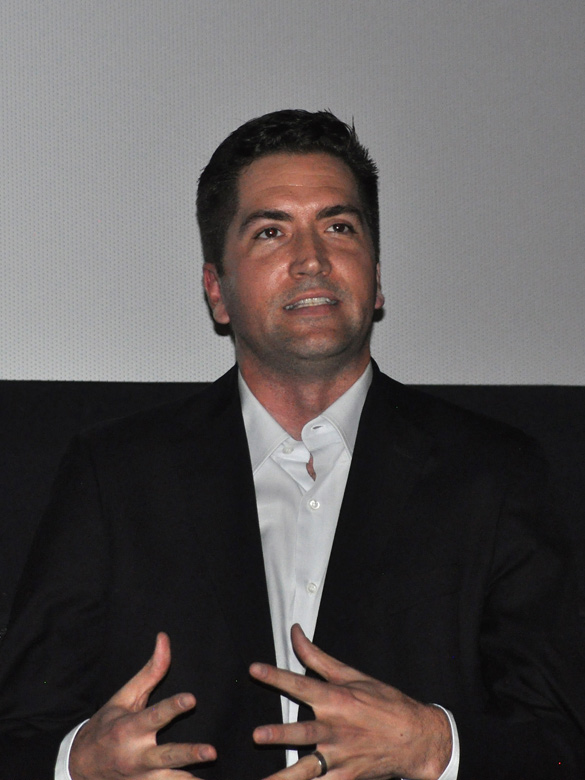 Drew Goddard answers questions from the crowd in theater number two during Sunday’s showing of ‘The Martian.’ Photo by Bonnie J. Gordon/ladailypost.com

The Los Alamos crowd might be the perfect audience for “The Martian,” which Goddard called “a love letter to scientists.” The film drew foot stomping and raucous cheers in both theaters.

The movie also is a love letter to nerds, with references to Ironman and “Lord of the Rings,” among other icons. The film has been praised for its accurate portrayal of the scientists and technicians striving to bring home astronaut and botanist Mark Watney (Matt Damon), stranded on Mars after his crew is forced to leave him behind, believing he’s been killed.

Watney and the folks struggling to bring him home must figure out the best use for the technology as well as think outside the box. As Watney says in a memorable line, “I’m gonna have to science the sh*t out of this.”

Author of the novel on which the film is based, Andy Weir, is the son of a physicist and has a computer science background. He and Goddard both know and love scientists. Scruffy, funny, warm-hearted and determined as well as really smart, Watney, the crew of his ship and technical people back home are the real deal.

The characters in the film are colleagues who care about each other, Goddard said. There’s no major love story at the center of the plot.

“Andy and I were going to the studio saying, ‘here’s a blog about scientists and hard science and we want to make it a feature film,” Goddard remembered. “To [20th Century] Fox’s credit, they went for it.”

Goddard told studio executives to think of the film as an epic religious movie about a man alone in the wilderness with his faith, but the religion here is science, he said.

But there was a caveat to Fox’s approval. The group pitching ‘The Martian’ had to get a movie star to sign on. Luckily Matt Damon said yes to the role of Mark Watney.

Damon is an actor who could carry off a role in which he is alone for 90 percent of the film, Goddard said.

The movie seemed charmed from the start, Goddard said. The studio loved the first draft of the script and made only a few changes before showing it to Damon. Master Director Ridley Scott read the script on a plane and signed on to direct the project before deplaning. A doodle he made in the margins would later be sent into space by NASA.

“NASA was wonderfully cooperative,” Goddard said. “They don’t let very many films use their official logo.”

Indoor shots were filmed in Budapest and the Mars scenes in Jordan, Goddard told the audience Sunday in Los Alamos. Goddard traveled to Budapest during the shooting. He wanted to include the deer that roam the grounds of the real-life Jet Propulsion Laboratory in California, but “they don’t have deer in Budapest,” he said.

In addition to paying tribute to scientists, the film also is “a love letter to my dad,” Goddard said. Goddard’s father is Los Alamos physician Dr. Laurence Woodbury Goddard. Goddard remembered how he and buddy Mike Weaver drove his car into a ditch when they were 18.

“When my dad arrived, he just said, ‘I’m gonna go get some Oreos and then we’re gonna figure out how to get out of this ditch,’” Goddard remembered. “Bruce [director of the Jet Propulsion Lab in the film] is my dad. He just roles up his sleeves and gets to work.”

When asked how he got started, Goddard said “It’s doable. I didn’t know anybody. I grew up here! Trust that if you want it bad enough, you can do it. Be ready to do anything. They’ll let you do the crappy jobs no one wants to do. I did all those jobs and it led up to this.” 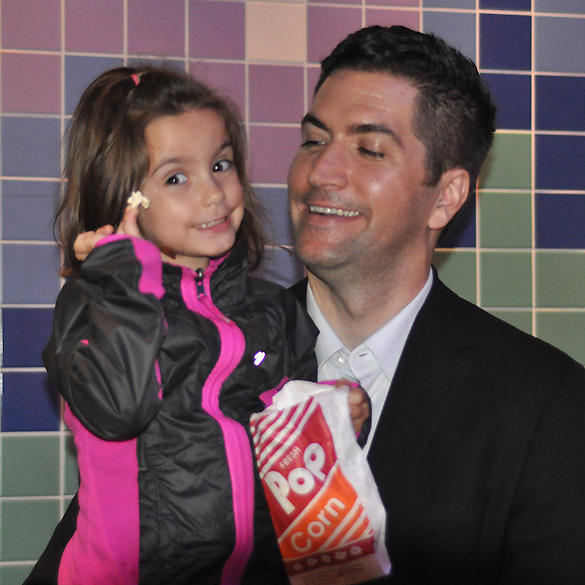 Drew Goddard and one of his two daughters enjoy a movie snack. Photo by Jim O’Donnell