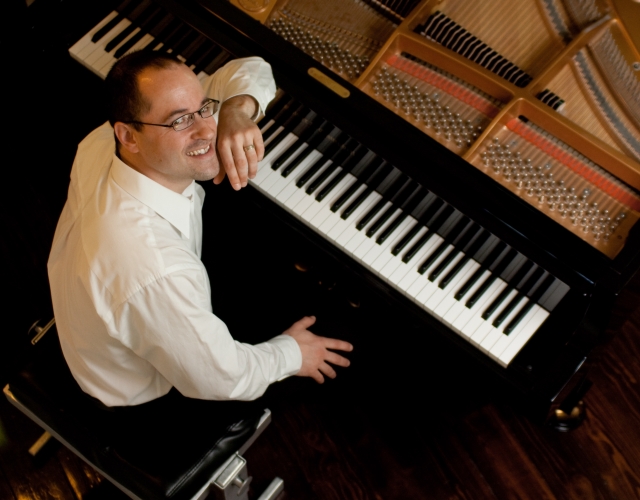 The Los Alamos Arts Council presents Alexander Schwarzkopf with David Schepps in concert for the noontime Dec. 4 Brown Bag performance at Fuller Lodge. All Brown Bag concerts are free and open to the public.

Currently, Dr. Schwarzkopf is on the piano faculty at the University of New Mexico, where he recently performed a recital of music by Beethoven and Shostakovich for cello and piano with David Schepps and a solo recital and lecture on Steinbach’s “Figures: 17 Choreographic Etudes for Piano,” the latter at the invitation of the composer.  Selections from the Steinbach composition as well as music for cello and piano by Prokofiev will be featured on the program for the December Brown Bag concert.

Originally from Colorado Springs, Alexander Schwarzkopf was raised in a family of artists; his father is an architect and prolific string player from Stuttgart, Germany, and his mother was an actress and professional puppeteer. He first performed in public at age 8 and became a scholarship student in piano at Colorado College at age 12. In 2003, he was a finalist at the Val Tidone “Silvio Bengalli International” Piano Competition in Pianello, Italy.

He has performed in the United States, Germany, Italy and the former Yugoslavia. Alexander Schwarzkopf has been featured at the Internationales-Klavierfestival in Lindlar, Germany and the DTKV “Musik aktis” Festival at the Landesmusikakademie in Heek- Nienborg and Münster, Germany; the American Liszt Society National Conference and Festival 2012, the Oregon Bach Festival Composer’s Symposium and “Soundbytes” New Music Series in Eugene, Oregon; “Mad Hatter’s New Music Series” in Boston; the world-premiere of Wittgraf’s “Jacobson Songs for Soprano and Piano” at the College Music Society National Convention; and was also featured in a studio recording and broadcast on Piano Etudes by Falko Steinbach and Frederic Chopin for the NPR station WCQS-Asheville. Artists with whom Schwarzkopf has trained include Jean Barr, Martin Bresnick, David Burge, David Finckel and Wu Han, Claude Frank, Awadagin Pratt, David Riley, Kurt Schwaen, Falko Steinbach, and the Borromeo and Miami String Quartets .

Schwarzkopf ‘s recent work on Falko Steinbach’s “Figures: 17 Choreographic Etudes for Piano (2006)” has resulted in lecture recitals, master classes and workshops on national and international concert series in Germany, New Mexico, North Carolina, Oregon, Washington D.C and Wyoming, as well as a compact disc recording, which was produced in Colorado and released in January of 2013.

In the 2014 concert season, Alexander Schwarzkopf has been engaged to perform J.S. Bach’s “Goldberg Variations” for the Pianoforte Recital Series at the Asheville Art Museum in Asheville, North Carolina, Artcore Recital Series in Casper, Wyoming as well as on performance series in Potomac, Maryland and Washington, D.C. He will be featured in concerts of Music for Two Pianos by Debussy, Mozart and Shostakovich in Asheville, North Carolina with pianist and Van Cliburn medalist, John Cobb, and a lecture and recital of Steinbach’s “Figures: 17 Choreographic Etudes for Piano” at the Internationales-Klavierfestival in Lindlar, Germany.

David Schepps, cello professor at UNM, is in the New Mexico Philharmonic, Figueroa Project, and Santa Fe Pro Musica, is principal of Opera Southwest and Santa Fe Concert Association Orchestra, and performs often as chamber musician and soloist. In the summer he plays in the world-renowned Grand Teton Music Festival.

He has played for solo, chamber and orchestral broadcasts on NPR’s “Performance Today.” He studied with Pierre Fournier and other prominent cellists.

Don’t miss this opportunity to hear both of these fine artists perform in the Arts Council Brown Bag Performance Series. The concert is noon Wednesday, Dec. 4 in the Pajarito Room at Fuller Lodge.