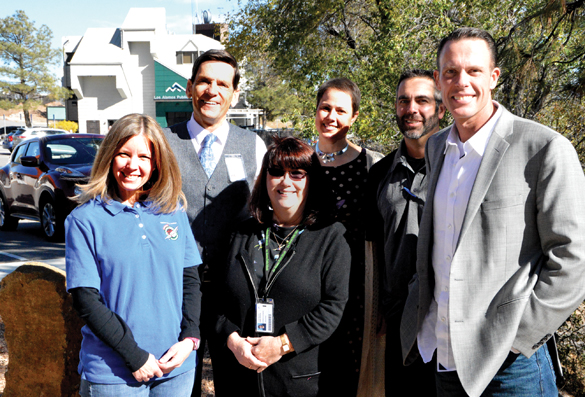 By CAROL A. CLARK
Los Alamos Daily Post
Members of the Los Alamos School Board unanimously approved a land lease Monday for a baseball training facility to be constructed on school district property on North Mesa Road.

School Board President Jim Hall abstained from the vote because he has business dealings with local real estate developer and Little League President James Chrobocinski, who is spearheading the project.

The Los Alamos Baseball Academy will be for profit and provide a year-round training facility for players with a modern metal building constructed on 1.18 acres of land near the County’s North Mesa Baseball Fields.

LAPS Chief Operations Officer Joan Ahlers handled the lease agreement between LAPS and Chrobocinski. She explained that the new facility complements the other baseball fields in the area. It also uses an odd shaped piece of land that has very little chance of being utilized for anything else.

“This is a full retail lease to be presented to the State Board of Finance for approval,” Ahlers said, adding that the business is just starting up and that the lease can always be amended later.

“With over 500 kids in Little League and a strong high school program there’s a real need for this facility,” Chrobocinski said.

School Board member Matt Williams called the land lease project a win-win if some services can be traded such as allowing the high school to use it for its students. “Absolutely,” Chrobocinski said.

Superintendent Kurt Steinhaus summed it all up saying, “We are fortunate that we have a very thoughtful and thorough school board that is prudent with the expenditure of funds.”

He thanked Chrobocinski for his willingness to tackle this project, saying, “On behalf of the school district and I think the school board does, too, we thank you for doing this for our kids … it’s a real benefit not only to our schools but to the entire community.”

LAHS Baseball Coach Brian Neal attended Monday’s school board meeting. He will run the day to day operations of the new baseball academy.

“I’m excited … mostly for the kids because as a guy who grew up in Los Alamos I never thought we would have something like this,” Neal said. “It’s great to have a guy like James Chrobocinski who is willing to step up and provide this incredible opportunity for our community.”

Once the state approves the 10-year land lease at $11,340 a year, with three 10-year options, Chrobocinski intends to get the facility built in time for the spring baseball season. He explained that the project is not something he anticipates making a lot of money on but rather an opportunity to provide kids throughout Northern New Mexico with access to year-round training.