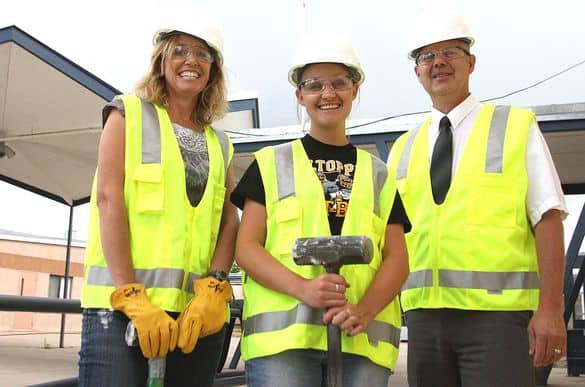 School Board Secretary Melanie McKinley, left, and Los Alamos Middle School Teacher Allison Washburn, both former LAMS students, joined Superintendent Gene Schmidt in knocking down walls Thursday at the middle school. Demolition is moving along with asbestos removal from the 100 and 500 wings nearing completion. Construction of the portable classroom complex is advancing with four portables already on site. Classroom portables from Los Alamos High School will be transferred to LAMS soon. Construction fencing is in place and the portable classroom complex will be operational in time for the start of the school year next month, Schmidt said. Photo by John McHale/LAPS 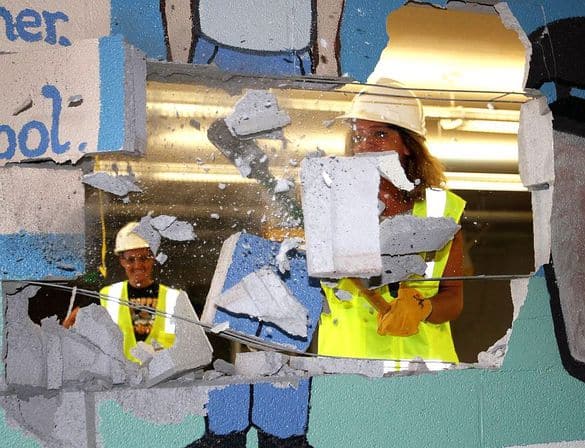 LAPS Superintendent Gene Schmidt told school board members during a special work session Thursday that PSCOC is not interested in funding anything beyond the $14 million threshold – the lowest of three bids submitted.

To cut costs, the PSCOC recommended the district install a 3-inch rather than 6-inch concrete slab, refrain from filling in an old utility tunnel near the north entrance to the cafeteria and remove the installation of exterior metal panels from the project.

The board decided it was important to install the 6-inch concrete slab to avoid cracking. Board members also opted to fill-in the utility tunnel, despite PSCOC’s recommendation to the contrary.

The problem with not filing in the utility tunnel, Dave Wharram of Gerald Martin said, is that it wouldn’t be certain which lines were live and which were not, which could become a problem for contractors in the future.

The metal panels, however, are merely an aesthetic solution to break up the stucco exterior appearance on the exterior of the new building, so the board decided against that $51,600 expenditure.

“I just don’t see the importance of having the metal,” Board Member Judy Bjarke-McKenzie said. 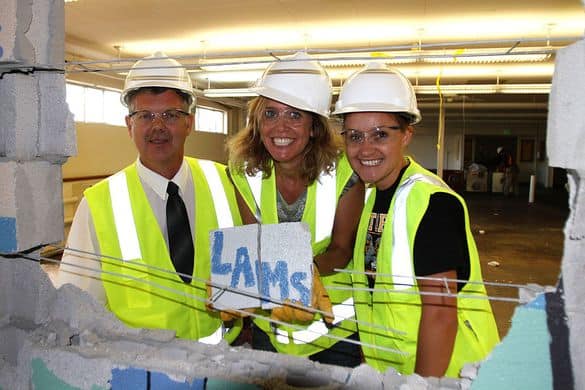 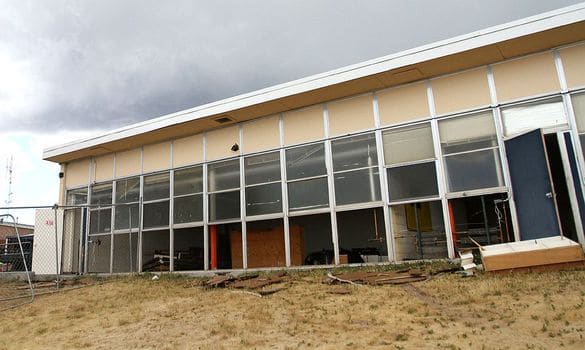 The school board also reviewed the status of the bus loop project for Los Alamos High School.

They discussed installing the loop to run along the edge of the Duane Smith Auditorium parking lot and P-Wing, installing a sidewalk along P-Wing and the perimeter of the high school campus and having parents drop off students in the Sullivan Field lot.

Los Alamos County owns Sullivan Field and Schmidt said it has no problem with the lot being used as a drop off point since it is a public parking space.

The estimated cost for the bus loop project is $200,000, Schmidt said.

Jody Benson, a member of the committee charged with looking into the bus loop project, said she preferred this option.

“I think this is the safest … practical and cost-effective,” Benson said.

Bjarke-McKenzie said parents will be need to be “trained” not to drop students off in the Duane Smith parking lot.

Board Secretary Melanie McKinley said flyers could be passed out during the first three days of school, letting parents know that after this three-day period, they would no longer be allowed to drop off students in the parking lot.

In an unrelated matter, Schmidt reported that an explosion had occurred on the high school’s roof earlier in the day on Thursday.

Workers turned off the wrong valve and when the compressor was turned on, the line blew up, he said.