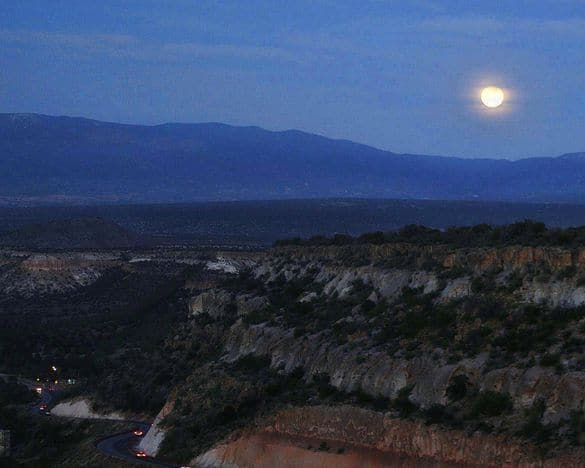 Saturday night’s perigee full moon or “supermoon” taken at the old Anderson Overlook was an incredible sight to behold as the moon was the closest and largest of this year to the Earth. Photo by Jennifer Bartram

Saturday night featured the closest and largest full moon of this year.

The word perigee describes the moon’s closest point to Earth for a given month.

But last year, when the closest and largest full moon occurred on March 19, many people used the term “supermoon.”

The term has been used again for Saturday’s close full moon.

How special is the May 5, 2012 supermoon? There are 4-6 supermoons a year on average, according to U.S. clocks.

They only happen when a new or full moon occurs with the moon at or near (within 90 percent of) its closest approach to Earth in a given orbit (perigee).

In short, Earth, moon and sun are all in a line, with the moon in its nearest approach to Earth.

May 2012 presents the moon’s closest encounter with Earth since March 19, 2011, at which time the moon was a scant 380 kilometers closer to Earth.

Saturday’s full moon fell at precisely 10:35 p.m. Central Daylight Time, according to U.S. clocks. This same full moon falls tonight at 3:35 Universal Time – the standard time at the prime meridian of 0o longitude, or, for example, in Greenwich, England.