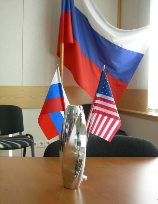 The people of Sarov, Russia, and the people of Los Alamos, NM, share a relationship. We are citizens of two communities that are more alike than different. We have committed to be involved with each other as Sister Cities. This relationship, this commitment has meaning that transcends our respective governments and any differences they may have, whether such differences are fleeting or longer term. The bonds between the people of our communities find deeper significance in the context of the Sister Cities International program itself, in the entangled histories of our cities and the laboratories at the center of each, and in what we can do together to demonstrate a more hopeful future for our two countries.

Sister Cities International – This organization was established by President Eisenhower in 1965 as a means of fostering peace and prosperity through the creation of bonds between people of different cities around the world. Through ‘citizen diplomacy’ people of different cultures celebrate and appreciate their differences while building partnerships that lessen the chance of new conflicts. Los Alamos and Sarov have been enrolled with Sister Cities International (SCI) since 1995, and our exchange programs have been repeatedly recognized at the national level for helping realize the goals of SCI.

History – The relationship between Sarov and Los Alamos grew out of the scientific interactions between the staffs of the nuclear weapons laboratories around which our two communities have grown. Technical cooperation nurtured personal friendships, which in turn led to social engagement and a growing recognition of common interests. A formal Sister Cities relationship was established by mutual, written agreement of our respective city governments in July 1994. Under this umbrella, there have been exchange visits by doctors, teachers, educators, students, social workers, police, fire fighters, and other community leaders and elected representatives. Our citizens have learned from each other, we have formed lasting personal relationships, and our lives have been changed.

Our Future – Lives will continue to be changed as we stay engaged. This potential is nowhere illustrated more dramatically than in our youth exchanges. Los Alamos students have their horizons dramatically expanded, they connect with Sarov friends through email and Facebook, and some have changed their career plans in response to their experience. Sarov youth value their American friendships, exchange birthday greetings and come to the U.S. to study. We treasure these and the many other long-term benefits of our Sister Cities relationship. We will stay the course; we are investing in our common future.

In a very prescient comment following a visit to Sarov, Council Chair Geoff Rodgers observed in October, “At a time when our national leaders are suspicious of one another–maybe rightfully so–it is the friendships that are forged in these kinds of relationships that I think will keep both countries–potentially the world–on the road to peace, rather than some kind of future confrontation.” Just last week, Alexey Golyubev, Mayor of Sarov, said to everyone in Los Alamos, “Please be assured we value our relationships. There were various political events in the past, and we – altogether – were able to demonstrate our good will.” We are Sister Cities. We are better together.