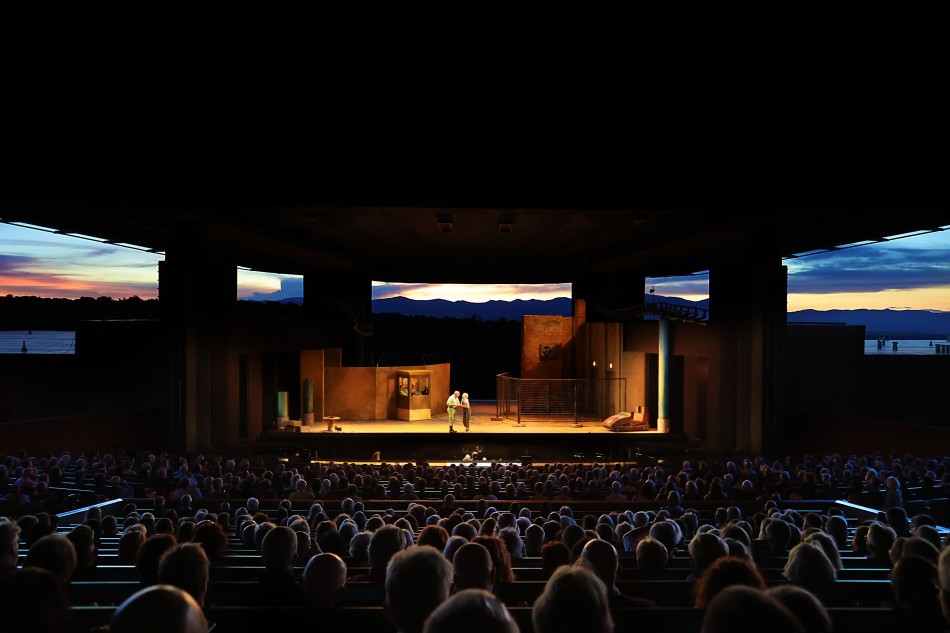 An audience takes in a performance of Carmen on stage at the Santa Fe Opera. Photo by Curtis Brown

“The 2022 Season goes down in history for many reasons,” General Director Robert K. Meya said. “The challenges we faced this year were unprecedented – beginning with the early threat of wildfire smoke, the ongoing challenges of COVID-19, the lift failure affecting the July 6 and 8 performances of The Barber of Seville and Carmen, and the challenging repertory. Yet, the artistic quality has never been higher – and the critical response to all five shows has been overwhelmingly positive. Many patrons have commented to me that this is the best season they have ever experienced at the Santa Fe Opera.”

The 2022 Season also was distinctive for its sheer output. The Santa Fe Opera Orchestra topped previous records with its number of musicians and hours played in rising to the challenges of Wagner’s Tristan und Isolde. Twenty-seven artists made their Santa Fe Opera debuts while an additional 29 artists returned to the Santa Fe Opera stage in a showcase of opera’s most exciting talent.

Also in full force were the Apprentice Programs — the company welcomed 78 Technicians and a record 48 Apprentice Singers from around the country and world. Costume Director Blair Gulledge and her team presented the highest number of costumes ever seen on the SFO stage: 517.

Immensity and challenges aside, the company confirms its second-best year of ticket sales in history, closing the season at $9.5 million and fundraising of $9.7 million.

“In spite of the challenges of the pandemic and geopolitical turmoil, the Santa Fe Opera has bounced back! And we could not have done it without you,” Meya said.

Building on the success of its Opera for All Voices (OFAV) initiative, the company recently announced upcoming world premiere performances of its third commission, This Little Light of Mine. The one-act opera about voting rights activist Fannie Lou Hamer will be presented 7 p.m., Oct. 28-29 and 2 p.m., Oct. 30 at The Lensic Performing Arts Center in downtown Santa Fe.

In December 2021, the company presented world premiere performances of its second OFAV commission, Laura Kaminsky and Kimberly Reed’s immigration-centered opera Hometown to the World. Throughout the 2022 fiscal year, the opera’s Community Engagement department along with its collaborative partners created opportunities for individuals ranging in ages from 3 to 103 that included Family Nights, Youth Nights, Opera Makes Sense with the Santa Fe Public Library, Opera Storytellers Summer Camp with UNM Prep Music School, a series of conversations and performances with Chatter and SITE Santa Fe, and free Opera in the Park screenings on Santa Fe’s Southside and Albuquerque’s Civic Plaza. All of these activities were presented as part of the opera’s ongoing commitment to bringing the joy of opera to all New Mexicans.

Continuing its commitment to reach new audiences through digital and social media, the company produced offerings for radio, television and the web. Of note was SFO’s first-ever national radio broadcast as part of WFMT Chicago’s Opera Series 2022; the Grammy-winning recording of the (R)evolution of Steve Jobs was heard in over 330 US markets. For the second year in a row, 95.5 KHFM Classical Public Radio broadcast the season’s productions, reaching listeners across the state of New Mexico and in over 50 countries via online streaming. Television production included a special feature about the making of M. Butterfly蝴蝶君 which aired in August on New Mexico PBS and remains available online for on-demand viewing. Additionally produced were its two podcasts, Key Change and Destination Santa Fe Opera, which reached listeners on six continents.

Joining the Santa Fe Opera Orchestra in the 2023 Season will be two new players in the positions of Principal Trumpet and Principal Bass. The appointments are the result of highly competitive national auditions which occurred in August. The Santa Fe Opera Orchestra is recognized internationally for the quality of its playing in a wide-ranging and demanding repertoire. Its members come from leading orchestras around the country. Many are active recitalists, chamber musicians and recording artists.

Santa Fe Opera Music Director Harry Bicket writes, “I am thrilled that Ian and William are joining this wonderful orchestra; they are both phenomenal players and musicians and will be huge assets to us as we continue to strive for the excellence for which the Santa Fe Opera is celebrated.”

Principal Trumpet William Leathers is a recent graduate of the Juilliard School and serves as Principal Trumpet Designate with the Nashville Symphony Orchestra. He has performed with the Cleveland Orchestra, the New York City Ballet, the Rodney Marsalis Philadelphia Big Brass, and the American Brass Quintet at the Aspen Music Festival, among others.

Each season, talented young singers and technicians take part in the Santa Fe Opera’s Apprentice Programs, where they receive intensive training and play critical roles in the creation, both on stage and off, of the season’s five mainstage productions. Their work culminates in two nights of staged and costumed Apprentice Scenes, created and performed solely by the apprentices. Of this season’s 78 Apprentice Technicians and 48 Apprentice Singers, 26 won cash awards, honoring their exceptional talent and hard work.

About The Santa Fe Opera

The Santa Fe Opera annually draws 85,000 people from New Mexico and around the globe. Nestled atop a mountain vista in northern New Mexico, the company’s iconic Crosby Theatre is open on three sides, allowing visitors to enjoy performances complemented by the elements. Since 1957, the company has presented over 2,000 performances of 179 operas by 91 composers spanning five centuries of opera, creating a legacy of 45 American premieres and 18 world premieres.