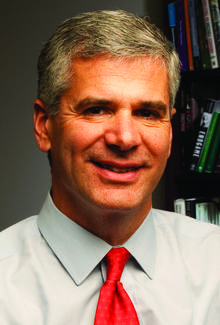 Michael Mauboussin, Chief Investment Strategist for Legg Mason Capital Management, has been elected chairman of the Santa Fe Institute’s Board of Trustees.

His three-year appointment began Nov. 4 and he replaces Jim Rutt, who served as chairman since 2009.

Mauboussin has been an active member of SFI’s Board since 2000 and of SFI’s Business Network since 1998.

He has contributed extensively to the Network’s activities as a speaker, panel member and co-organizer of Network Topical Meetings and Symposia.

His complex systems-inspired advice on market behavior and dynamics is frequently sought by financial analysts and reporters alike.

His new book, “The Success Equation: Untangling Skill and Luck in Business, Sports, and Investing,” brings a multidisciplinary perspective to the relative roles luck and skill play in individual and business success.

In addition to Mauboussin’s appointment as chairman, the Board also made the following appointments:

Reese Jones, a venture capitalist and trustee of Singularity University at NASA Ames, was elected an SFI trustee (three-year term);

Murray Gell-Mann, an SFI founder and winner of the Nobel Prize in Physics (1969), was named a lifetime member of SFI’s Board of Trustees. Gell-Mann has played a leading role in the development of multidisciplinary approaches to the study of complex adaptive systems, a field the Santa Fe Institute has pioneered since its founding in 1984.

The Santa Fe Institute’s Board of Trustees, which has the fiduciary responsibility for the Institute, oversees the Institute’s operation through its biannual meetings and its active committees that offer advice and support to SFI’s leadership.