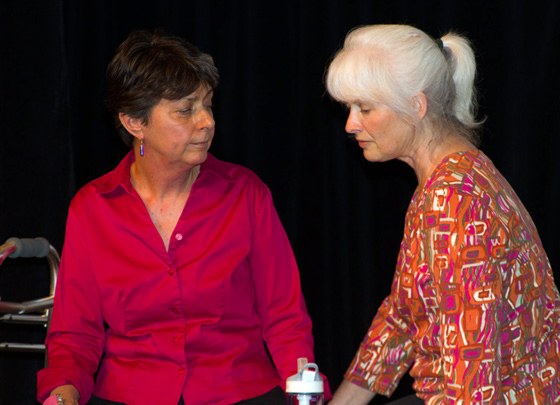 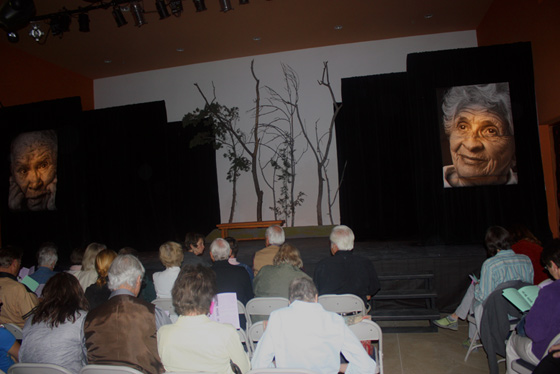 The play had its world premiere last night at the Toolshed Theatre in Dixon, the brand new home of the Dixon Community Players.

“Salt and Pepper” is really seven one-acts that go together like a string of pearls. They all deal with characters aged 60 or older in a variety of situations seldom explored on the stage, but encountered often in the real lives of seniors. Some of the themes explored include falling in love, facing death (both our own and in those we love), becoming invisible as a person, going on a fun but slightly awkward first date and becoming the caregiver of a spouse.

Although the plays are intertwined, each stands alone as a complete one-act play. The over-arching theme is courage—the courage to live, the courage to change, and the courage to die. Given the theme, playgoers might expect poignancy and words of wisdom and they get those. What they may not be expecting is how funny the play is. There was plenty of laughter in the packed house Friday night. Not bad for a play that has two scenes set at the grave of a deceased spouse.

I’m not going to give away the plots of the vignettes that make up “Salt and Pepper.” The surprises are part of the fun. I enjoyed all of them. It’s hard to pick a favorite, but if pressed, I’d go with “Forever.” Five of the seven one-acts deal with couples, but this one is about two good friends who meet at the Post Office. Karla Eoff (Joyce) and Diane (Helen Rynaski) are in a difficult situation. Diane is attempting to give Joyce a gift, but can she accept it? I was utterly convinced of their friendship and of the emotional depth of each character. It rang so true I felt like an eavesdropper in the Post Office lobby.

Eoff and Rynaski give wonderful performances, but so does the rest of the cast of “Salt and Pepper.” One big advantage of having a cast, all but one of whom are over 50, is all that stage experience. It really shows. I’d list more great performances, but it would just end up as a cast list.

Directing duties are divided between Jane Ayles and Kay Peters Johnson. Both do a great job. I also want to give a nod to technical director Lynn Alden, Simon Feavearyear on lights and Chuck Wright doing sound as well as producer and designer Holly Haas. The technical aspects of the show are unobtrusive but nearly perfect.

The Toolshed is a jewel box of a theatre and a great new asset to northern New Mexico. Homey doesn’t start to capture it. The theater seats around 75 and has professional lightening, great acoustics and a commercial kitchen. Renovations are happening on a daily basis. The new patio wasn’t there two weeks ago.

The Toolshed is located in Dixon. If you haven’t been there recently, be sure to come early and check out the town. A lot is happening in this small village.

Seventy percent of proceeds of the Dixon Community Players shows benefit a local non-profit and the lucky recipient this time is the Carnelian Center, an affordable holistic health center in Dixon.

As one character in “Salt and Pepper” remarks, “DD&B (Dying, Death and Burial) is on the rise. Everyone’s doing it.” As the giant generation of Baby Boomers ages, more and more people face the joys and sorrows of aging, in themselves and in those they care about. It was time someone took on those themes and it’s terrific to see them so well dealt with in this production.

Have I convinced you to make the trip to Dixon and see the play? You can read more about the production here. Visit the Dixon Community Players online and purchase tickets through PayPal at www.dixonplayers.com

Salt and Pepper will be performed this weekend only with three more performances: 2 p.m. and 7:30 p.m. Saturday, June 8 and 2 p.m. Sunday, June 9. Tickets are $12 for adults and $10 for students and seniors.