‘Salt and Pepper’ a Funny, Touching and Accurate Look at Aging 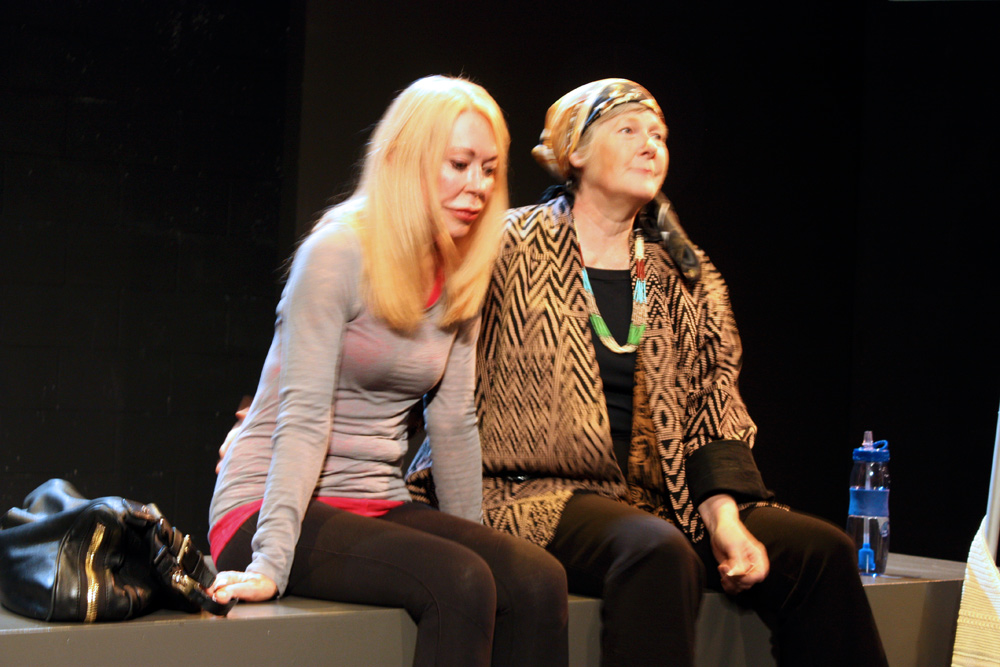 It’s not often one reviews two productions of the same play within five months. I reviewed the New Mexico premier of Los Alamos playwright Robert Benjamin’s “Salt and Pepper” in June. Last night I attended a new production at Teatro Paraguas in Santa Fe. The Santa Fe Rep and Teatro Paraguas staging of the play is a joy from start to finish.

“Salt and Pepper” takes on the nearly uncharted territory of aging as a person, not a stereotype. All but one of the characters in the play is over 60. As real life seniors know, aging presents challenges like facing the death of those we love, becoming the caregiver of a spouse, becoming invisible to the rest of the world and facing one’s own mortality. The senior years can also include new adventures, falling in love and going on a somewhat awkward first date. “Salt and Pepper” is about all these things.

The play is a series of seven individually titled scenes. Each scene could stand alone as a short one-act play, but the themes and characters are intertwined. This production has some changes to the script that connect the pieces more fully.

This play is at its heart, about courage ─ to live, to change, and to die when the time comes. Given the theme, you might expect poignancy and words of wisdom and you get those. You also get laugh after laugh, because this play is really funny. The house rocked with laughter over and over on opening night.

This was due in no small part to the excellent direction of Beth Kennedy Jones. Jones uses a series of interesting entrances and exits from the front of the theater rather than the wings. It is as though the characters are stepping out of the audience to tell their stories. It’s very effective. Little touches, such as a dancing couple who disappear, then reappear at the back of the stage as they exit are deft and beautiful to watch.

The set is a series of black cubes that function as a couch, a table, a park bench ─ whatever is required. Using these pieces over and over helps tie the acts together.

One of the advantages of an older cast is the years of experience they bring to the stage. This cast of professional actors is just superb. You pick a favorite and the next character to step on stage blows you away all over again. This is community theatre where the actors come straight from Broadway and feature films. The cast includes Alaina Zachary, Fran Martone, Deborah Dennison, Deborah Hayden, Tone Forrest, Kerry Kehoe, Larry Glaister, Rick Vargas, and Tad Jones. They are uniformly wonderful.

If I had to choose a favorite from among the seven scenes, it would be “Forever.” Five of the seven scenes involve couples, but this one is about two friends who meet at the Post Office. The deep emotions of a long friendship are too seldom seen on stage. Dianne (Jennifer Graves) wants to give Joyce (Deborah Hayden) a gift, but will she be able to accept it? This scene is laugh-packed and heart breaking. It’s so well done you’ll think you are next in line at the Post Office, overhearing the conversation.

From a career reborn to a love rekindled, “Salt and Pepper” is full of hope and discovery. It’s also full of loss, regret and fear ─ and wisdom and courage and lots and lots of laughs. Don’t miss it.

“Salt and Pepper” is performed at 7:30 p.m. Fridays and Saturday with Sunday matinees at 2 p.m., Nov. 1-10 at Teatro Paraguas Studio, 3205 Calle Marie. Tickets are $18 general admission and $15 for seniors and students. For reservations and information, call 505.424.1601 or visit Teatro Paraguas online at www.teatroparaguas.org. Be sure and reserve your seat. The house was full on opening night.

“Salt and Pepper” opened Off-Off-Broadway at the Spiral Theater last weekend under the name “Wrinkles.” It continues through Nov. 17, in case you happen to be in New York. The play is being seen in a number of productions around the country. It’s a wonderful play about a neglected subject. It’s great that a larger audience will experience our very own Robert Benjamin’s wonderful drama.