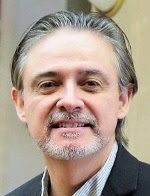 Rob Martinez
HSFF News:
Historic Santa Fe Foundation presents the January Salon El Zaguán monthly lecture series with Rob Martinez on Brujería: A History of Witchcraft in New Mexico.
The talk is scheduled for 3 p.m., Thursday, Jan. 10, 2019, in the sala of HSFF’s El Zaguán located at 545 Canyon Road, Suite 2, Santa Fe.
There is no charge for admission for members and the non-members entry fee is $10. RSVP is required to 505.983.2567 or info@historicsantafe.org. Membership information on Join & Give page.
New Mexican enduring beliefs in witchcraft and the ways of sorcerers during the Spanish Colonial and Mexican periods have been a life long fascination for Deputy State Historian Rob Martinez. As a graduate student at the University of New Mexico in the mid 1990s, while searching for a research topic for his Master’s thesis, a professor brought to Martinez’s attention an Inquisition case from the 1760s at Abiquiu about an outbreak of sorcery in that community.
Martinez started researching deep into the topic of Spanish and Native American witch beliefs as well as steeping himself in the study of Church history in Spain, Mexico and New Mexico. Finally, when a colleague brought a copy of the Inquisition folios to Martinez from Mexico City, he began the long process of reading and using paleography to decipher the document. The result was a thesis titled Fray Juan Jose Toledo and the Devil in Spanish New Mexico. This presentation about brujería and hechicería, witchcraft and sorcery, examines the background and context for that case and many others. The talk also touches on why, even in current times, such beliefs still persist in New Mexico.
About The Speaker
Deputy State Historian Rob Martinez is a native New Mexican born and raised in Albuquerque. A graduate of the University of New Mexico with a B.B.A. in International Business Management, Martinez then went on to pursue his interest in New Mexican culture and history at U.N.M., earning an M.A. in Latin American history, with an emphasis on church, cultural, and social practices of the Spanish Colonial period in New Mexico. During his tenure as a graduate student, he was a research assistant for four years at the Vargas Project, learning research skills and paleography, abilities that would serve him well as a historian. Upon graduating, Martinez pursued a teaching license and also worked for 14 years as a research historian for the Sephardic Legacy Project, scouring civil and church archives in New Mexico, Mexico, Spain, France, Italy, Cuba and Puerto Rico, analyzing documents for a research and publishing project about the Crypto-Jewish phenomenon in New Mexico and the Caribbean.
Martinez has presented papers and lectures on his research at the University of New Mexico, as well as history conferences throughout the southwestern United States. He also has spoken to historical groups in New Mexico such as the Hispanic Genealogical Research Center of New Mexico, the Albuquerque Historical Society, and the Society for Crypto-Judaic Studies about research methodology, unique findings, New Mexico Hispanic culture, and general History of New Mexico. Martinez was a teacher at Rio Rancho High School for 10 years, educating young New Mexicans about World History, New Mexico History, and Language Arts. Martinez has published articles on New Mexico genealogy and culture in periodicals as diverse as Herencia: The Quarterly Journal of the Hispanic Genealogical Research Center, IMAGEN magazine, Tradicion Revista, and the New Mexico Genealogist.
Finally, Martinez also is a folk musician, performing and promoting New Mexican Hispanic musical traditions for the past 20 years with his brother Lorenzo and their father Roberto Martinez in the group Los Reyes de Albuquerque. With his musical family, he has performed in all parts of New Mexico, and at the Smithsonian Folk Life Festival in Washington, D.C., the NEA’s National Heritage Fellowship Awards, and also at the Kennedy Center for the Performing Arts.
To RSVP, contact Jacqueline Hill at info@historicsantafe.org or call 505.983.2567.
Menu
Los Alamos
64°
Sunny
5:48am8:22pm MDT
Feels like: 63°F
Wind: 9mph SW
Humidity: 30%
Pressure: 29.98"Hg
UV index: 0
SunMonTue
91/64°F
91/64°F
90/64°F
Weather forecast Los Alamos, New Mexico ▸