Salome: The Princess And Her Worst Nightmare 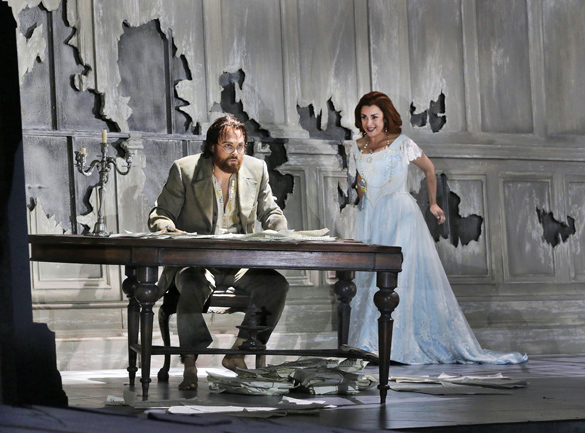 A new production of one of Richard Strauss’s most popular operas, Salome, opened Saturday night at the Santa Fe Opera. An excruciating portrait of a homicidal family, the opera conceivably takes place in real time in less than two hours in a single act. It goes down in a gasp.

This is a story about a very bad dream in the life of a princess named Salome, step-daughter of Herod Antipas, who ruled Galilee and Perea. Together with Herodias, Salome’s mother, they get a brief but sensational mention in both Matthew and Mark in the New Testament. Herod is played by tenor Robert Brubaker, who delighted Santa Fe audiences in 2011 as the Captain in the military-themed Austrian opera Wozzeck. Herod was a Roman governor in Judea during the time of Jesus and John the Baptist, his spiritual forerunner,  In this new production, the setting  has been time-shifted to the early twentieth century when the opera was composed.

Director Daniel Slater has said this time period was deliberately chosen because it was a time when world was about to topple into an apocalyptic war. It was also a time when intellectuals were beginning to hear about and utilize Sigmund Freud’s new concepts of “free association,” “transference,” “ambiguity,” “the Oedipus Complex,” and “infantile sexuality,” all relevant for understanding submerged truths about abnormally troubled people and cultural artifacts.

John the Baptist is given the name Jochanaan in Strauss’s German version of Salome and played brilliantly by bass-baritone Ryan McKinley. He enacts a charismatic revolutionary prophet heralding a magnificent spiritual transformation. Herod, who doubts and dislikes Jochanaan, but doesn’t want to have a religious uprising on his hands, has kept the prophet incarcerated in a   hidden chamber inside his palace. We learn that Herod has killed his own brother some years ago, and taken his brother’s wife Herodias (played with subtle evil by Michaela Martens). Under the inescapable and objectionable gaze of her “stepfather,” Herod, Herodias’s daughter, Salome is about to have a psychotic breakdown.

The title role features Alex Penda, a soprano from Sofia, Bulgaria, who made her Santa Fe debut as Ermione in the opera Ermione in 2000. That was when she used her full name, Alexandrina Pendatchanska, and was on her way to international stardom. Most recently at SFO she played Leonore in Beethoven’s Fidelio in 2014. She specializes in roles that require a strong lead and is a vocal powerhouse in a small package. Just prior to her performance Saturday night, she (@alexpanda) tweeted: “Singing Salome is always thrilling! But now is special – hope to let public feel what I feel and take all this to a very special place tonight!”

By all accounts that special place was fully achieved.

More than most operas, Salome depends on the artist in the title role. She must combine seamlessly the coltish stubbornness of an adolescent with the maturity of a musical genius in full flower.  It’s a role Penda was born for.

The opening scene brings together a group of pompous people including Herod sitting at a banquet table waiting to be entertained. The Bible says this happened on Herod’s birthday. In the background the last light of day fades from the cloud-tossed Jemez Plateau. Salome escapes from her uncle’s oppressive banquet and his lascivious gazes and emerges on a terrace as if unbound. Her first notes seemed tentative, but then as if refreshed by the night air, she took a deep breath and skipped across the stage in high heels.  Awhile later in those same high heels, she managed to take the seemingly perilous steps across a kind of makeshift bridge to descend into the depths of the palace.

Compulsively, Salome becomes obsessed with the prophet, whose voice hovering above the ground can be heard cursing her mother Herodias. Despite repeated warnings by a young captain who is in love with her, Salome plunges ahead, going down for a meeting with the prophet in his lair. As it turns out, she learns that her father was a prisoner in the same cell for a long time, before Herodias arranged for Herod Antipas to kill his brother, Salome’s father, and Herodias began what Jochanaan condemns as an incestuous relation with murderer. All of this seems only to increase Salome’s desire for Jochanaan’s body, his hair and eventually his juicy mouth.

The famous Dance of the Seven Veils is not merely a highpoint, but also a singular test for every production of Salome, often played with voyeuristic overtones for Herod and the audience. Salome, tired of her father looking at her all the time is forced to expose herself, usually interpreted literally as a striptease, one veil at a time. But here, the exposure is symbolic, internal, not literal. Not getting naked, but becoming honest and ethereal.

“Movement doesn’t lie,” according the production team, who used a phrase that modern American dancer Martha Graham often quoted from her father. Meanwhile, in keeping with the psychological theme, windows of repressed memories open in the background of the set, where her thoughts seem to be working toward a realization of what has happened to her and what she must do. All the while, Salome dances with such uncomplicated purity and grace that she completely wins us over without any overtly seductive gimmicks, which is quite a twerk in this sexually supercharged age.

Afterward, Salome delivers the bill. She wants the head of Jochanaan on a silver platter. Herod is  shocked, offering her anything else, and up to half his kingdom, a pointed remark that does not go unnoticed by Salome’s mother, who has continued to nag him about his shameless staring at her daughter.  “Give me the head of Jochanaan,” she insists, despite every entreaty to the contrary by her father.

Even more of a climax takes places in the final scene, which succeeds in evoking about as many emotions as one can feel, including a jolt of the eroticism missing from the Dance of the Seven Veils and cancelled by an equal and opposite repulsion, expressed in movement more powerful than words.

To create this torturous portrait of a deeply disturbed family, the opera borrowed almost its entire plot, dialogue and title from a translation of a play by Oscar Wilde, the martyred Irish aesthete and playwright who was imprisoned for “indecency” with other men and died prematurely in 1900, Strauss saw a version of Wilde’s play in 1902 and Salome, the opera, had its premier in Dresden in 1905.

The composer Strauss, a favorite of SFO’s founder John Crosby, created a new kind of tonal musical treatment that somehow escorted this unimaginable story into a compelling and perhaps even redeeming awakening. As the conductor of the current production, David Robertson, said in an SFO video interview, “The orchestra is not in a subservient role but it’s actually one of the protagonists telling the story.” The music contributes its own voice that gives a liberating expression to the repressed and submerged unconscious of the principal characters.

As the budding psychoanalytical movement fathered by Sigmund Freud came into fashion at the turn of the century, centered in Vienna, the inexplicable behavior of a seemingly innocent young girl could sometimes be explained by Freud’s technique, which is implicit in the opera. At first, Freud taught that much of human behavior eludes explanation because it is hidden or repressed, but can be glimpsed in unconscious behavior like free association or dreams or irrational speech. He was also a pioneer in the study of infant sexuality which led him to conclude that enhanced bodily pleasure was a fundamental human drive from birth. Additionally, he traced the clinical hysteria of some of his female patients to early experiences of child abuse that he found much more common than most people suspected.

Even more to the point, perhaps, is the following psychological insight about “the male gaze” which is a working concept that came out of second-wave feminist thought, summed up here in a passage by the American author John Berger from his book Ways of Seeing:

A woman must continually watch herself…Men look at women. Women watch themselves being looked at. This determines not only most relations between men and women, but also the relations of women to themselves. The surveyor of woman in herself is male: the surveyed female. Thus she turns herself into an object and most particularly an object of vision: a sight.”

Performances of Salome continue through August:

For more information about these and other performances, call the Santa Fe Opera box office 505.986.5900 or click www.santafeopera.org.