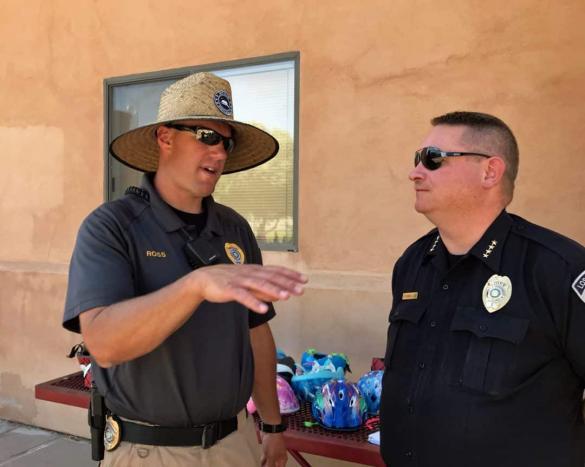 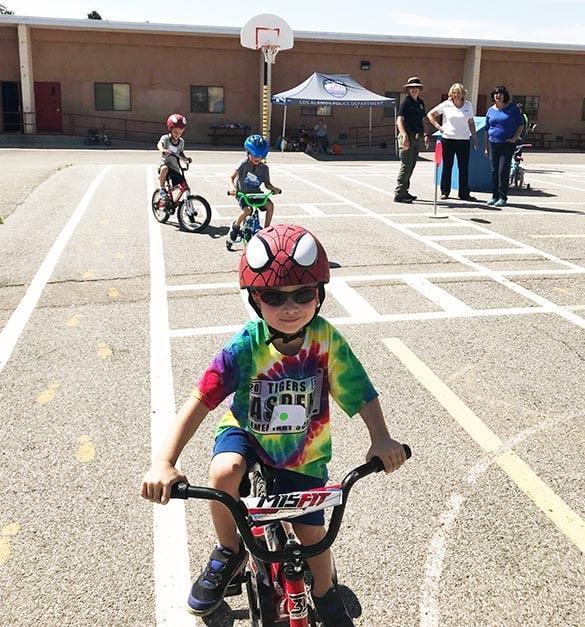 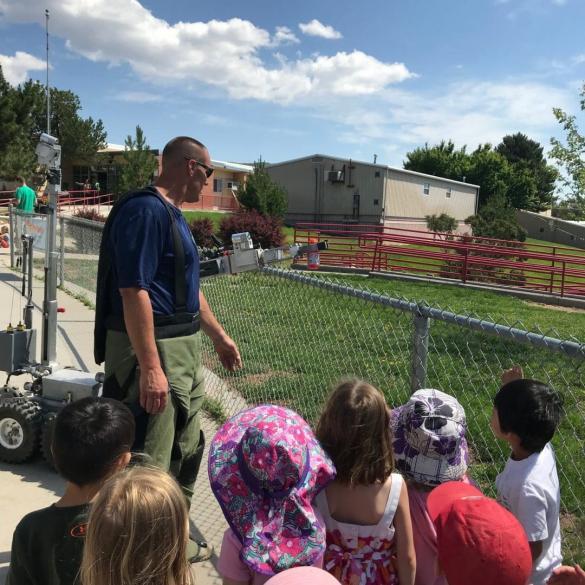 Los Alamos Police Sgt. Chris Ross and a group of Safety Town participants watch an LAPD bomb truck robot pick up a Gatorade bottle during Safety Town. The robot was remotely operated by Cmdr. Preston Ballew from inside the truck. Photo by Maire O’Neill/ladailypost.com 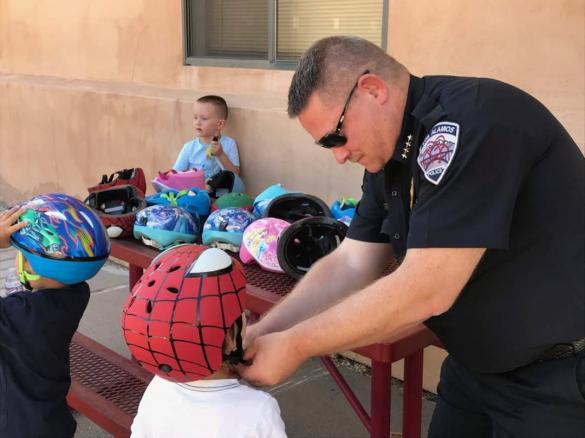 Los Alamos Police Chief Dino Sgambellone probably never thought when he attended Safety Town as a child in the early 1970s in Mansfield, Ohio, that he would be responsible for bringing the popular program to Los Alamos in 2015, some 40 years later.

Safety Town, a safety education program, was actually founded in Sgambellone’s hometown of Mansfield in 1937 by a traffic commissioner and a kindergarten teacher. Kindergarten Teacher, Mrs. Ruth Robbins. It was designed to teach various areas of traffic safety to pre-kindergarten children in a free community program. This year, some 100 incoming kindergarten students attended Safety Town at Mountain Elementary School and Sgambellone said it is encouraging that each year since its inception in Los Alamos, attendance has grown.

“I believe it is an outstanding program that helps educate children about numerous safety topics while building trust within the community,” he said.

Sgambellone said the Safety Town also helps parents and Los Alamos Public Schools with preparing young children and acclimating them to the school environment. He praised former Mountain Elementary School principal, now Assistant Superintendent Jennifer Guy saying without her the program would not be where it is today. She and her staff have been outstanding,” he said.

LAPD’s Community Liaison Unit leader Sgt. Chris Ross and team members Cpl. James Keane and Cpl. Adele McKenzie who are school resource officers are on hand throughout the week. Sgambellone said the Ross and the SROs are committed to the program and it shows. He said they continue to be invaluable to the program’s success. Other LAPD members helping this year’s program included Cmdr. Preston Ballew with the bomb truck and robot exhibition, dispatchers Seth Martinez and Mario Pratti and Det. Matt Lyon who taught gun safety. Sgambellone read to participants from a book about Gloria, the safety dog and Animal Control Officers discussed safety with wild or unknown animals.

Los Alamos Fire Department members spent one morning at Safety Town giving attendees tours of their ambulance and fire truck and teaching children what to do if fire breaks out at their home. LAPS bus drivers were on hand to show the young participants how to ride the school bus safely.

Ross said this is his third year of being involved with Safety Town. He said this year the program was shortened to two weeks while still providing all the information the kids were getting the previous years. He said he thinks it is a much better and faster camp because there is less down time which is better when dealing with five and six year olds.  Ross said this year the number of attendees increased by about 30.

“”Having 100 kids enrolled this year was really awesome. The program is starting to take off and what we’re starting to see is the siblings coming in. The older brother or sister went through it a couple of years ago and now the siblings are starting to go through it, so families have multiple attendees who have gone through the program. This is really what we want. We want the program to grow on its own,” he said.

“We give them those rules here in Safety Town for things they have never done before like ride a school bus. We also really preach bicycle safety rules such as wearing helmets, the proper way to ride a bike, being on the righthand side of the road and using hand signals. We really encourage them if they are going to ride anything, a scooter, a bike, a  skateboard, to make sure they wear a helmet. This year each kid received a helmet to take home so that we can really make that transition” he said.

“Safety Town helps kids to translate safety messages from the school system to the home environment and that’s really what we want,” he said. “We try to give them a  general awareness of things that kids are going to encounter while they are out and about during their daily life. We even have the lifeguards come in from the County and they do open water safety rules such as don’t swim in large pools of water if you don’t know how deep it is. Or be sure your parents are there with you if you’re at a friend’s house and they have a swimming pool, make sure you have an adult with you.”

“It’s the police department telling them, the fire department telling them, it’s the lifeguard or the bus driver telling them. So, I think after a while kids kind of tune out what their parents are telling them but when it’s coming from someone else, they will listen to it. It’s our responsibility to relay that message to the parents too. Now we’ve given the kids some of the foundation and we want parents to continue at home emphasizing the same messages we have conveyed to them at Safety Town. We give them a good solid foundation and now it can be transitioned into the home life,” he said

Ross said the kids ask a lot of questions so instructors can see that they are really into to the information they are being taught.  He said participants don’t just sit down and watch a presentation, that it’s interactive and they can ask questions about different situations.

“That’s how you know you’re starting to captivate your audience,” he said.

Ross said participants in Safety Town run the gamut when it comes to the amount of safety information they already have when they come to the program. He said some kids look both ways before they cross the “road” while others just run.

“We see both sides of it and we wanted to bring everyone up to that level of safety-mindedness so that we don’t have to worry about kids running out in the middle of the road,” he said.

As the program continues to grow, Ross said, the idea of having two one-week sessions to accommodate the participants. He said this year, the number was capped at 80 but we didn’t want to leave anyone out so they started the days a little earlier and added a fifth rotation to accommodate more kids.

He said the big kick-off for Safety Town is during the school district’s Kindergarten Roundup where parents are registering their kids for kindergarten. Students are given the paperwork and then registration is done by the County Parks and Recreation Department. Before this year’s Kindergarten Roundup, more than 40 kids had registered, he said. Ross said Safety Town is not just open to LAPS students but to anyone in the area. He said he would like to see the program expanded to more participants in the area.

“If other school districts or police departments in the area wanted to reach out, they could come up here and look at what we use for lesson plans, how we organize and run this program. We’re more than willing to share the information on what we have to do to provide this because ultimately we want to get that safety-minded mindset into children as early as possible and entering kindergarten is a great age to start at. It really is a partnership – with school districts and police departments working together and building on that relationship right there,” Ross said.

He added that this is a great opportunity for law enforcement to build the bridge with youth and families in the community because it gives an opportunity to show that local enforcement cares about your child and wants to ensure they have a safe environment at school and that they follow safe practices throughout their day. When parents see how Safety Town is evolving, they see that police are here for a good cause, that they’re here actually for what they say they are – to build that public relationship and trust, he said.

Ross said parents tell him they see the day to day excitement in their kids, that when they pick them up the kids can’t wait to tell them what they what they learned.

“That’s when we know we are making a difference,” he said.

Asked why he so passionate about Safety Town, Ross said it goes inside his daily job.

“My daily job is trying to provide a safe environment for kids in schools. It starts here in kindergarten and we take it all the way to the 12th grade. If we can do something to provide a safe environment and a safe educational setting for our kids, we’re doing our job. We are developing the concept of being aware of your surroundings and keeping yourself safe from a young age which means that in certain situations you’re going to make a better decision,” he said.

“I love safety town! It is one of my favorite activities that we do all year. I think it is amazing to see so many different groups from around our county come together to make our students safer. This year we had 98 students enroll! It has been so exciting to watch this program grow each year. I am honored to get to be a part of it. Most of all, it is a lot of fun to spend time with all of these new kindergarten students,” she said.

“They have worked hard to develop curriculum and prepare materials that support the topics for each day. The children have a chance to practice important school skills and practice being kindergarten students. It is a great transition into school,” she said.

This year, New Mexico Bank & Trust purchased 100 bike helmets for the all participants in Safety Town. According to Sgambellone, the program in Mansfield, Ohio has always been funded by private donations such as NMB&T and he would like to see more of this type of generosity, which would enable the program to continue without cost to children.