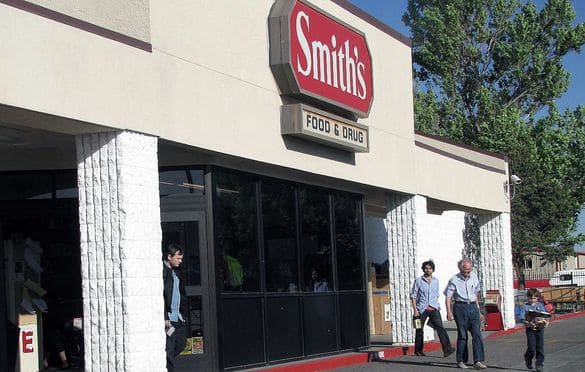 Corporate officials state that Smith’s Food & Drug in White Rock will remain open for business despite rumors to the contrary. Photo by Carol A. Clark/ladailypost.com

Rumors that Smith’s in White Rock is closing down have escalated considerably over the last two weeks among customers and employees alike.

The panic seemed to reach a fever pitch Thursday with some customers vowing to circulate petitions asking everyone living in White Rock to boycott the Los Alamos store in protest.

“Those rumors have no foundation in truth,” said Gilford during an interview from corporate headquarters in Salt Lake City. “This is just rumor mill fabrication.”

“We have no intention of closing the White Rock store,” Gilford said firmly.

During a special County Council hearing held Feb. 1 in Council Chambers, Bruce Van Horn, Director of Real Estate for Smith’s Food and Drug stated the proposed Smith’s Marketplace will be the largest Smith’s in New Mexico and the sixth largest in the United States.

Council Chair Sharon Stover, a White Rock resident, asked for a commitment from Van Horn that the White Rock store would remain open after the Smith’s Marketplace is built in Los Alamos.

“He said they’ve invested a lot of money in the White Rock store and assured us it would stay open,” Stover said this morning.

Van Horn told Stover and her fellow councilors at that hearing that the corporation had recently invested $1 million in improvements to the White Rock Smith’s and said that the store would definitely remain open.

In regards to the Mari-Mac Shopping Center where the Los Alamos Smith’s is located, Van Horn indicated that the corporation’s intention, after the Smith’s Marketplace is built, is to eventually sell that shopping center to get a return on their investment.