Rumors Of An Upcoming Farce Are Well Founded 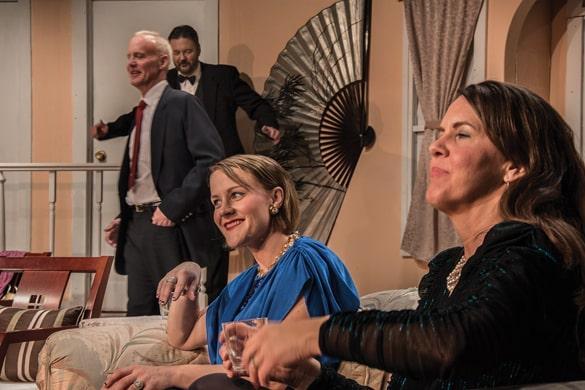 Anyone who enjoys laughing until it hurts should be sure to attend the Los Alamos Little Theatre production of “Rumors” by famed playwright Neil Simon.

“Rumors,” which was first performed in 1988, follows members of New York’s high society trying to survive an evening of miscommunication, misunderstanding and mayhem. Four couples have gathered for an anniversary celebration, but the first couple to arrive finds the house unattended, the hired help missing, and the host upstairs in his bedroom, bleeding from a self-inflicted gunshot wound and passed out from pain killers. His wife is nowhere to be found.

The first couple works hard to keep the other guests, arriving in turn, from finding out what they discovered, and the lies and misdirection gather increasing momentum.

“This play is a fun, fast, and endearing comedy,” Director Patrick Webb said. “The anniversary party never gets started and the attempts at a cover-up get more and more desperate as characters zip on and off stage and get more and more confounded.”

“I wanted to do something completely different, like Monty Python,” Simon said in a 1988 interview with the New York Times. “A farce is relentless. It’s relentless in its needs for plot twists, and to keep the comedy going.”

And, of course, any good farce needs a lot of doors so characters can enter and exit in a dizzying choreography of confusion. The set provides those doors, and lots of floor space for the non-stop action and movement.

“It’s hilarious, crazy, and unpredictable,” said Cassandra Bowman, who plays Officer Pudney, one of two cops who arrive late in the play and force the party guests into yet further depths of deception.

The first guests on scene are Ken and Chris Gorman, played by Paul Lewis and Trisha Werner. Lewis, noting the couple’s unsuccessful attempts at crisis management, said, “As more guests show up, things spiral out of control. Chris migrates to the bar while a mishap turns Ken into comic relief,” Lewis said. “After many twists and turns it all works out … sort of.”

The reason it works out, sort of, is that Lenny Ganz, played by Ian Foti-Landis, pulls off a minor miracle when all looks bleak.

“Lenny says and does what our inner child wants to do,” Foti-Landis said. “He carries his emotions on his sleeve, which can lead to very high energy, dramatic moments. For me, Lenny allows me to channel my desire to say what I’m thinking.”

Tami Martinson, who plays Cookie Cusack, a television chef with a quirky
personality, said, “When I read this play, I knew that I wanted to be Cookie. She’s one of the few characters that stays calm in all the confusion. Her priority is serving a great meal.”

Martinson also enjoys Simon’s flair for words: “During all the chaos driven by gunshots and missing people, his characters have a continuing dialogue that will have the audience laughing throughout the show.”

Thomas Graves, who grew up in Los Alamos and has recently returned after years away, decided to audition for “Rumors” as a way getting more involved in the community. In the role of Glenn Cooper, who is running for State senate while bickering endlessly with his wife, Graves said “this is a good way to embarrass myself because I can be a fool on stage the entire time.” He encourages all his old friends to come be entertained at his expense.

Cindy Hines, who plays Cooper’s wife, Cassie, said, “I have the pleasure of playing probably the least likable character in the play, who spends the evening demonstrating her displeasure with her husband’s possible infidelity. What fun!”

The other actors in the production are Holly Robinson, Larry Gibbons and Trevor Nickless.

Nickless, Graves and Bowman are first-timers to the LALT stage. Bowman was a member of Española’s Mainstreet Theatre and first encountered LALT when she came to borrow costumes for Mainstreet’s production of “A Christmas Carol.” She said part of the enjoyment of being in “Rumors” is that “there are so many people involved, so there’s always someone to offer assistance or advice.”

Simon, who died earlier this year at the age of 91, had a long string of theatrical hits and even had four of his plays performed on Broadway at the same time. Comedy was embedded in most of his plays, although “Rumors” may be his only all-out farce. During his career he won both the Tony Award (four times) and the Pulitzer Prize, and had four Oscar nominations.

Los Alamos Little Theatre is a member-driven, non-profit 501(c)3 organization that since 1943 has been presenting community theatre for the entertainment and engagement of Northern New Mexico audiences.

Information about LALT’s season is available at www.lalt.org, where you also can sign up for email notices of auditions, performances and special events.