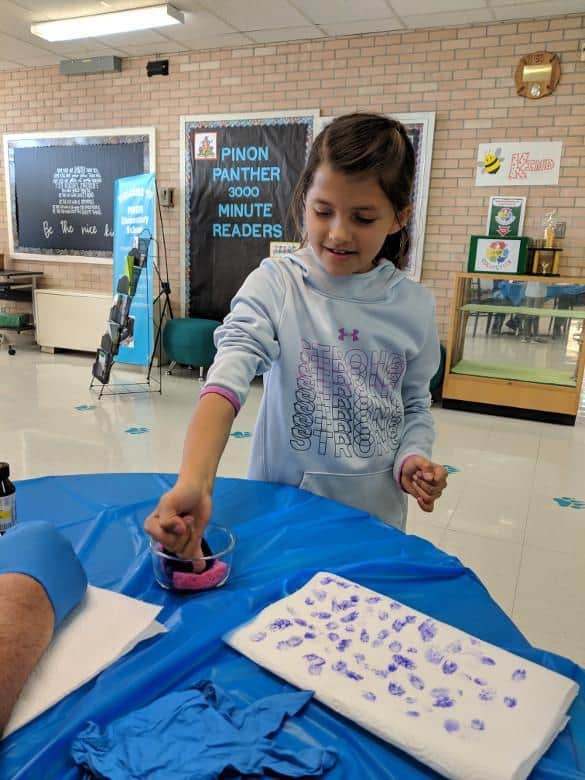 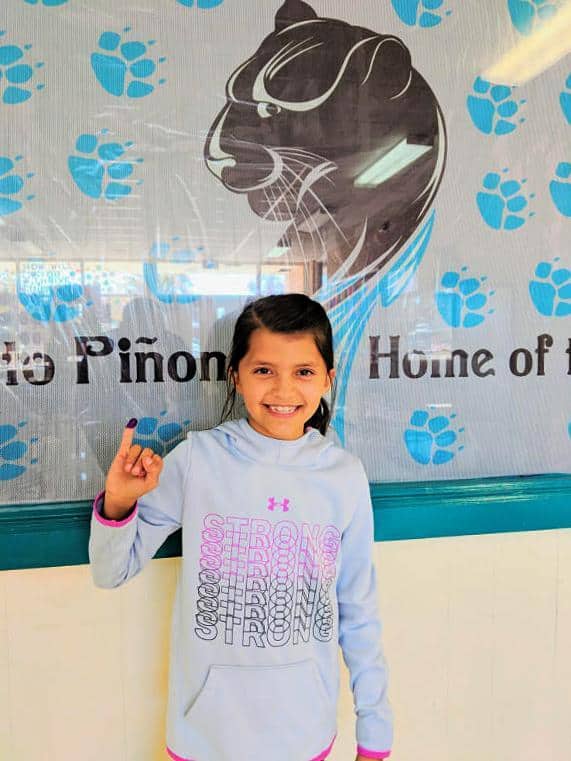 Pinon student Sierra Morris smiles for her father, Rotarian Oliver Morris, as she shows him her Purple Pinkie. Photo by Oliver Morris
ROTARY News:
Nov. 8, in recognition of The Rotary Foundation, the funding branch of Rotary International, the Los Alamos club hosted a polio eradication event, Purple Pinkie, at all five elementary schools during lunch hour.
For a voluntary $1 donation, the price of an oral vaccine, students were allowed to dip their little finger into the same antiseptic purple dye that children overseas use when designating they have been given the vaccine.
With the vaccine, a child can be protected for life against this highly infectious, crippling disease that causes paralysis and sometimes death. More than $1,100 was raised for Rotary International’s PolioPlus.
Rotary International’s effort to address polio eradication started in the Philippines in 1979 with a five-year commitment to immunize six million children. By the early 1980s, Rotary began planning for the most ambitious program in its history – to immunize all of the world’s children against polio.
Initially its role was that of a catalyst, providing money for vaccines and recruiting volunteer support to overcome problems associated with distribution. In more recent years, PolioPlus monies have funded transportation and other operational costs, surveillance efforts, laboratory needs, and training for healthcare workers involved in the immunization process.
In 1995, Rotary launched a task force to advocate political and financial support for polio eradication among governments worldwide; in 2000, Rotary partnered with the United Nations Foundation to carry a financial appeal to the private sector. Other strategic partners have joined Rotary, including Unicef, the Centers for Disease Control, and the Bill & Melinda Gates Foundation, which now matches $2 for every $1 Rotary donates.
Since those early days, polio cases have been reduced by a staggering 99%, and there are only two endemic countries left, Pakistan and Afghanistan.
However, with conflict situations in these countries, and with new reports of polio among refugees, immunization is severely curtailed.
Rotary brings together a global network of volunteer leaders dedicated to tackling the world’s most pressing humanitarian challenges, connecting 1.2 million members of more than 34,000 Rotary clubs in more than 200 countries.
Their work improves lives at both the local and international levels, from helping families in need in their own communities to working toward a polio-free world.  For more information, visit Rotary.org or call Los Alamos Rotary Vice President Linda Hull at 505.662.7950.
Previous
Next
Menu
Los Alamos
18°
Snow
7:22am6:15pm MDT
Feels like: 3°F
Wind: 14mph SSW
Humidity: 85%
Pressure: 30.09"Hg
UV index: 1
MonTueWed
21/21°F
32/25°F
36/30°F
Weather forecast Los Alamos, New Mexico ▸
Previous
Next