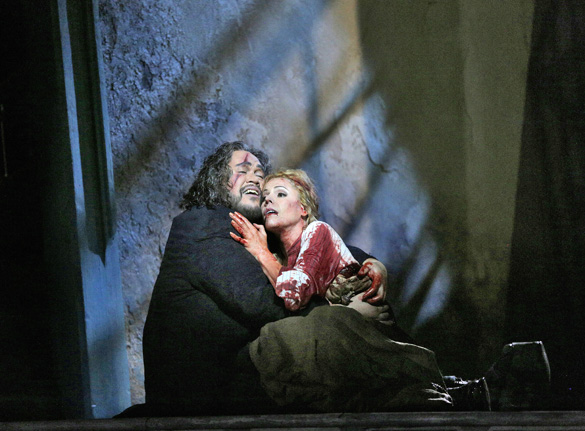 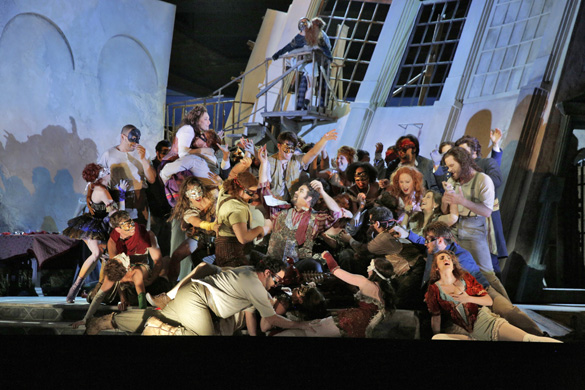 Giuseppe Verdi’s tragic masterpiece Rigoletto provided a decisive boost to the struggling composer’s already promising career in 1851, and opened a new era for nineteenth century opera after its introduction at La Fenice near the Venice Rialto. Saturday’s performance at the Santa Fe Opera in Tesuque, one of the Rialto’s most vibrant outposts, gave proof of Rigoletto’s timeless appeal.

Far from an immediately pleasurable experience, this relentlessly dark story begins on a set with a skewed perspective, with transparent walls and staircases that disappear from perspective, with thugs lying dead on top of a late-night platter of boar’s head and lascivious floozies draped on the furniture, ready to perform at a hint of arousal.

The title character Rigoletto is a jester, or court fool, at the Duke of Mantua’s palace, but Rigoletto’s bitterness toward the Duke and his court has filled him with an evil poison. Asked by an assassin for the name of a man Rigoletto wants killed, Rigoletto responds with hatred, “He is crime. I am punishment,” (Dostoyevsky would not write the novel with this title until 1866.)

Disfigured and disabled physically as well, Rigoletto represents one of the most despicable characters since the motiveless malignity of Shakespeare’s Iago in Othello. We know from Verdi’s own words that it was the Shakespearean depth of Rigoletto’s evil that attracted him to the story based on a Victor Hugo play and adapted by the librettist, Francesco Maria Piave. Just before the opera opened, Verdi fought with some success to avoid tempering his version against the objections of the censors of Austria, whose government ruled most of Northern Italy at the time,

Can we sympathize with this horrible human being even a little bit because he has a beautiful, young daughter whom he loves so madly and despite his unsavory character and irredeemable behavior? That is the challenge Verdi created for himself and his audience.

We know we are in good hands for this production with baritone Kelsey Quinn, who made his SFO debut as Rigoletto this week. No stranger to the role, this was his eighth outing as Rigoletto since his first in 2011 at The Met, with two more European engagements set for next year. He continues to prove both his acting ability and his facility in expressing the high baritone range with the extraordinary emotion that Verdi requires.

Rigoletto’s captive daughter Gilda, who does not even know her father’s name, is not allowed out of her prison-like apartment except to go to church on Sunday, but she manages to use her sliver of freedom to share entrancing glances with the young Duke himself, which creates a fatal germ of impending peril in the plot.

Tenor Bruce Sledge, who plays the role of the two-faced Duke of Mantua, has become a familiar figure at SFO. Last year he performed both Vladimir Vladimirescu in The Impresario and the Fisherman in Le Rossignol. He made his debut with the company in 2005 as Count Almaviva in The Barber of Seville and returned as Paolo Erisso in Maometto II in 2012.

Gilda is played by soprano Georgia Jarman, an SFO apprentice singer in 1997, who made her debut Saturday to great acclaim.

Together the father and daughter sing magnificent duets of paternal love, fury and despair. Near the end they participate in Verdi’s breakthrough presentation of a quartet – a wonderfully intricate, spatially separate but musically interwoven piece that overlaps a separate part of the stage, the Duke and the seductress Maddalena (played by Nicole Piccolomini, making her SFO debut).

An opera is made up of a few thousand moving parts, many of them subtle and easily forgotten, but there is a special musical moment in this that would stand out in a maelstrom. If there were no other reason to attend the opera Rigoletto, the presence and profound implications of a playful little tune about fickle women that sounds like a carnival calliope, would be reason enough to go well out of one’s way. “Le Donne e mobile,” widely regarded as the greatest tenor aria of all time, is sung as a little complaint.

Women are as fickle
as feathers in the wind,
simple in speech,
and simple in mind.
always the loveable,
sweet, laughing face

Hardly an epic song, this one is so simple, the melody is instantly recognized, but the multiple ironies of the piece are nearly unfathomable. It is sung by the Duke who is the leading, two-faced libertine in the land. It should be a perfect tool to sabotage Gilda’s love for this faithless Duke, but the girl of a sequestered life is stuck on her first love. For Rigoletto, of course, the ditty comes as a crushing revelation that the Duke is alive, which can only mean that the body in the sack that he has paid the assassin to kill can only be the person who means everything in the world to him.

“But it is just this rather simple universality that is the emphatic feature of the musical reputation of Verdi. He has not written epics, but he has scattered song and lavished melodies upon the lap of earth, and earth with a smile has sung them back.” 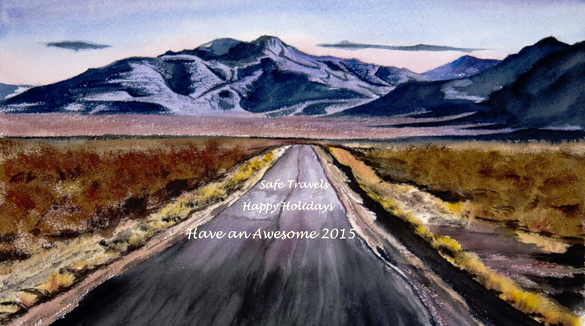