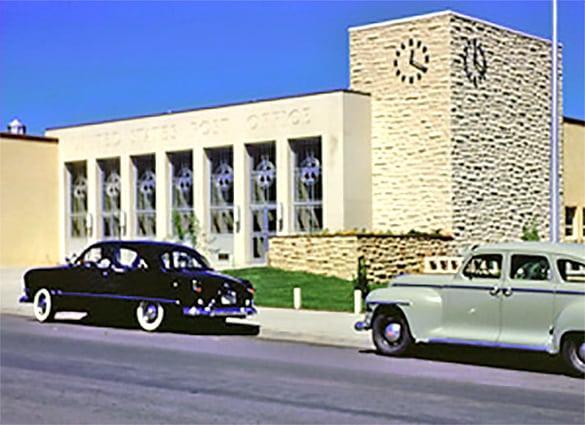 This historic photo shows two clock faces mounted to the exterior of the U.S. Post Office in downtown Los Alamos. It is suspected the clocks disappeared sometime in the 1970s-1980s. Courtesy photo
By KIRSTEN LASKEY
Los Alamos Daily Post
kirsten@ladailypost.com
A mystery has surfaced in downtown Los Alamos and two residents are working to solve it with assistance from the Historic Preservation Advisory Board and Los Alamos Historical Society.
In 1948, two clock faces were mounted on the south and east sides of the U.S. Post Office on Central Avenue. They were a constant feature until suddenly one day the clocks vanished. It is speculated that the clocks disappeared some time in the 1970s-1980s. Los Alamos locals Linda Hull and Mark Rayburn are hoping to locate the missing clocks and get them restored to the Post Office.
Rayburn explained that in 1947 construction started on a community center and the project was finished in 1948. The center had “a lot of stores and shops and it was considered America’s first outdoor shopping mall”, he said.
Included in the community center had a bowling alley, theater, sporting goods store, shoe store and many other retail stores and the post office. While the post office still stands, the clock hands visible on the tower have disappeared.
“We are trying to discover what happened to it,” Rayburn said.
He explained that he and his family moved to Los Alamos in 1950 when he was three years old. Rayburn said he always enjoyed seeing those clocks when he was a child and would check the time whenever his family would walk or drive by the post office. If his family was wandering around the community center separately, they would usually say, “Let’s meet at the clock tower.”
Rayburn also said he admired the aesthetics of the clocks, saying their architecture was classic.
Hull joined Rayburn in investigating this mystery after looking at a historic photo of the post office that hangs outside the entrance of the Blue Window Bistro on Central Avenue. She said she noticed the photograph showed the clocks and realized they were no longer mounted on the building.
She called the Los Alamos Historical Society and was referred to Rayburn.
“For me it’s a personal community project,” Hull said.
Rayburn, who serves as chair of the Historic Preservation Advisory Board said, “The board is initiating the pursuit to bring the post office back to its original historic beauty by putting the clock works inside and the clock faces back on the tower.”
The Post Office is listed on the National Registry for Historic Places. A plaque was installed in July 2016. Rayburn said finding the clocks are important: “I want to put the building back in its original state.”
He explained that the exterior of a historic building is considered the most important part. The Historic Preservation standards put greater significance on a building’s exterior and the interior does not hold as much credence.
Plus, Hull said, “I do think when you know it’s missing, you want it back.”
As a result, Hull and Rayburn are looking for anyone with information about the clocks. Anyone with clues to help solve the mystery are encouraged to contact either Hull or Rayburn through email. Hull’s email address is northmesa@comcast.net and Rayburn can be contacted at mark@rayburndesign.com.
They are optimistic the mystery will be solved. “We’ll discover something,” Rayburn said. “All it takes is one person to know what happened.”
Menu
Los Alamos
36°
Fair
7:11am5:22pm MST
Feels like: 36°F
Wind: 0mph ENE
Humidity: 44%
Pressure: 30.25"Hg
UV index: 2
MonTueWed
46/25°F
43/21°F
37/19°F
Weather forecast Los Alamos, New Mexico ▸