Researchers Examine Use of Cosmic-Ray Radiography on Damaged Reactor Cores 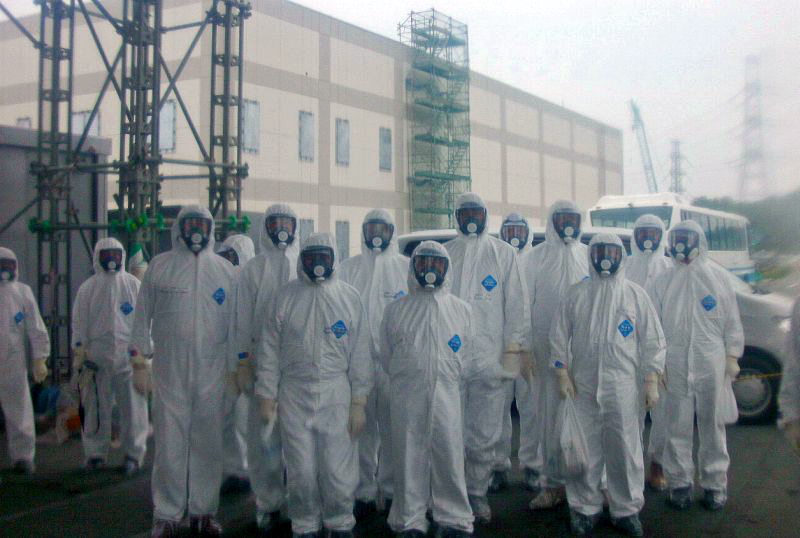 Los Alamos National Laboratory Muon Radiography team members stand in front of the damaged Fukushima Daiichi reactor complex during a visit to evaluate whether Los Alamos’ Scattering Method for cosmic-ray radiography could be used to image the location of nuclear materials within the reactor buildings. Courtesy/LANL

Researchers from Los Alamos National Laboratory have devised a method to use cosmic rays to gather detailed information from inside the damaged cores of the Fukushima Daiichi nuclear reactors, which were heavily damaged in March 2011 by a tsunami that followed a great earthquake.

In a paper in Physical Review Letters, researchers compared two methods for using cosmic-ray radiography to gather images of nuclear material within the core of a reactor similar to Fukushima Daiichi Reactor No. 1.

“Within weeks of the disastrous 2011 tsunami, Los Alamos’ Muon Radiography Team began investigating use of Los Alamos’ muon scattering method to determine whether it could be used to image the location of nuclear materials within the damaged reactors,” said Konstantin Borozdin of Los Alamos’ Subatomic Physics Group and lead author of the paper. “As people may recall from previous nuclear reactor accidents, being able to effectively locate damaged portions of a reactor core is a key to effective, efficient cleanup. Our paper shows that Los Alamos’ scattering method is a superior method for gaining high-quality images of core materials.”

The process is analogous to an X-ray image, except muons are produced naturally and do not damage the materials they contact.

Massive numbers of muons shower the earth every second. Los Alamos researchers found that by placing a pair of muon detectors in front of and behind an object, and measuring the degree of scatter the muons underwent as they interacted with the materials they penetrated, the scientists could gather detailed images.

Because the muon scattering angle increases with atomic number, core materials within a reactor show up more clearly than the surrounding containment building, plumbing and other objects.

Consequently, the muon scattering method shows tremendous promise for pinpointing the exact location of materials within the Fukushima reactor buildings.

Using a computer model, the research team simulated a nuclear reactor with percentages of its core removed and placed elsewhere within the reactor building.

They then compared the Los Alamos scattering method to the traditional transmission method.

The simulation showed that passive observation of the simulated core over six weeks using the scattering method provided high-resolution images that clearly showed that material was missing from the main core, as well as the location of the missing material elsewhere in the containment building. In comparison, the transmission method was barely able to provide a blurry image of the core itself during the same six-week period.

“We now have a concept by which the Japanese can gather crucial data about what is going on inside their damaged reactor cores with minimal human exposure to the high radiation fields that exist in proximity to the reactor buildings,” Borozdin said. “Muon images could be valuable in more effectively planning and executing faster remediation of the reactor complex.”

In addition to their potential utility at Fukushima, muon radiography portals have been deployed to detect potential smuggling of clandestine nuclear materials.

These detectors can noninvasively find even heavily shielded contraband in minutes without breaching a container, vehicle or other smuggling device.

Cas Milner is credited by the team as the author of the original concept of applying muon imaging to Fukushima.

Los Alamos research on the project was made possible through Los Alamos’ Laboratory-Directed Research and Development Program (LDRD), which is funded by a small percentage of the Laboratory’s overall budget to invest in new or cutting-edge research.

The U.S. Department of Energy supported contacts of the Los Alamos team with other research groups, including several Japanese institutions and the University of Texas.