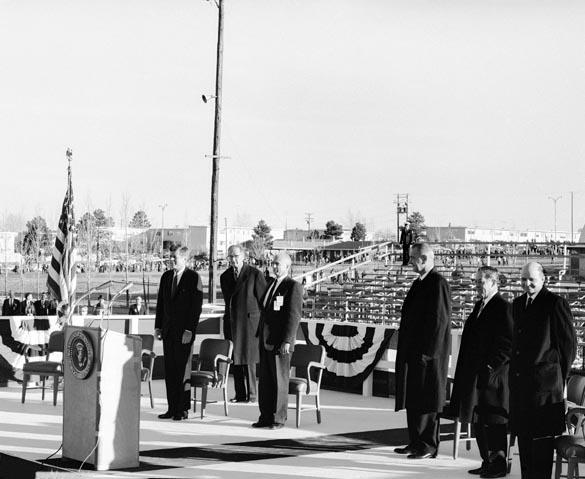 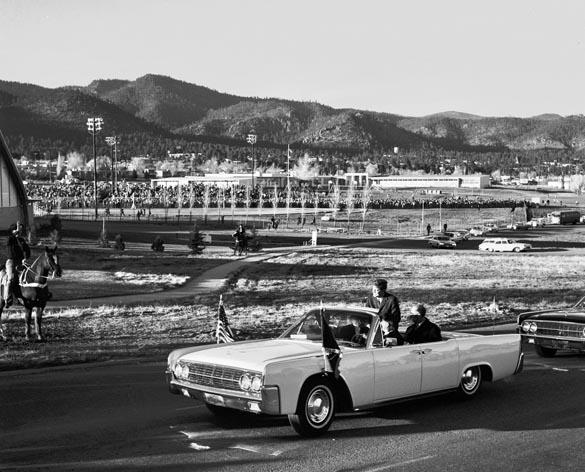 After President John F. Kennedy addressed the crowd on the football field, a motorcade took him along Central Avenue, where the streets were lined with even more people wanting a chance to see the president. It was an opportunity that no one in Los Alamos that day would ever forget. Photo Courtesy/LANL Archives

On Dec. 7, 1962, President John F. Kennedy stood on the football field across from Los Alamos High School to deliver a speech.

I was one of those girls on the field that day, and even now, 56 years later, I still get emotional thinking about that experience, and I know for a fact that I’m joined in that remembrance by hundreds of others.

Excluding news photos and television broadcasts, most Americans never get the chance to actually see our president, but for those of us on the field and in the stadium that day the experience was magnified by the fact that President Kennedy was speaking specifically to the people of this community.

The president began in a light-hearted way by commenting, “Senator Anderson just said, ‘Well, I don’t know how well they dress here, but they’ve got brains.’ But I think you look very well, and I want to tell you that we are delighted to have you, to have a chance to come and express our greetings to you.”

Most of the crowd was, indeed, dressed in Los Alamos casual, but it didn’t seem to matter as he moved on to more serious words.

“The United States, which has a great faculty for self-criticism, highly developed, and quite rightly values it as one of our essential freedoms, I think fails to take into account what an extraordinary burden and what an extraordinary job this country has done over the last 17 years in the defense of freedom,” Kennedy said.

He went on to outline how the United States, along with allies and NATO had managed to accomplish that defense of freedom and then personalized the connection to Los Alamos.

“There is no group of people in this country whose record over the last 20 years has been more pre-eminent in the service of their country than all of you here in this small community in New Mexico,” the president said.

“We want to express our thanks to you. It’s not merely what was done during the days of the second war, but what has been done since then, not only in developing weapons of destruction, which by an irony of fate, help maintain the peace and freedom, but also in medicine and in space, and all the other related fields, which can mean so much to mankind if we can maintain the peace and protect our freedom.

“So you here in this mountain town make a direct contribution not only to the freedom of this country but to those thousands of miles away. And therefore, I am proud, as President of the United States, to come here today and express our thanks to you, and to also tell you how much I’ve admired from some years ago, from reading an article about the kind of schools that you run here and the kind of boys and girls that you’re bringing up. We hope from them the same kind of service that you have rendered. Thanks to you all.”

Speaking personally, I believe his words of thanks to this community are just as valid today as they were 56 years ago.