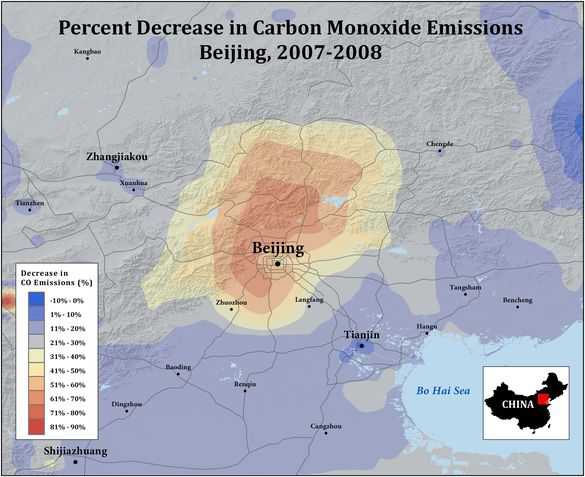 New research shows that levels of carbon monoxide dropped sharply in the Beijing area between 2007 and 2008, due to traffic restrictions imposed because of the 2008 Summer Olympics. This change in emissions, determined from a computer model along with satellite measurements of carbon monoxide, enabled scientists to infer that carbon dioxide emissions also dropped dramatically, an indication of the effect that reduced traffic can have on the greenhouse gas. Image by Lex Ivey/CourtesyAGU

WASHINGTON—China’s Olympian attempt to improve air quality during the 2008 summer games did more than provide a healthier atmosphere for the athletes. It also demonstrated that widespread changes in transportation patterns could greatly reduce the threat of climate change.

New research by an international team of scientists indicates that China’s restrictions on motor vehicles had the side benefit of dramatically cutting emissions of carbon dioxide by 24,000 to 96,000 metric tons (about 26,500 to 106,000 U.S. tons) during the event.

To put this in perspective, the authors note that this reduction by a single city represents more than one-quarter of 1 percent of the emissions cut that would be necessary worldwide, on a sustained basis, to prevent the planet from heating up by more than about 2 degrees Celsius (3.6 degrees Fahrenheit) by the end of this century. That is the amount of heating generally considered to lead to major societal impacts.

While scientists have long known that reduced traffic would lead to lower carbon dioxide emissions, they could not previously calculate with any precision the link between traffic volume and emission levels of the greenhouse gas.

“The Beijing Olympics allowed us to actually measure what happens when people drive much less, and it turns out that it makes quite a substantial difference to our climate,” says scientist and lead author of the study Helen Worden of the National Center for Atmospheric Research, in Boulder, Colo. “People may think their choice of how to commute to work doesn’t make a difference, whether driving their cars or riding their bikes. But on a large scale, it really does.”

Worden and her colleagues published their findings on July 20 in Geophysical Research Letters, a journal of the American Geophysical Union (AGU).

—Clearing the air for Olympians—

As China has industrialized in recent decades, residents of Beijing and other major cities have been subjected frequently to unhealthy levels of air pollutants. To provide better air quality during the 2008 Olympics, Chinese officials imposed stringent limits on motor vehicle use, including banning 50 percent of privately owned vehicles on any single day because of alternate-day driving requirements. They also imposed limits on industry and temporarily suspended construction activity.

Recent research has confirmed that the restrictions successfully reduced levels of air pollutants such as carbon monoxide and ozone. Worden and her colleagues, using new methods in satellite observations and computer simulations, were able to estimate the impact on carbon dioxide emissions as well.

The study measured the effect of driving reductions and did not address the China’s policy during the Olympics. “This implies that sustained controls on urban transportation emissions, on the scale implemented in Beijing, could potentially provide a significant part of [emissions reduction],” the study concludes. “However, in this study, we do not address the sustainability of these controls or the feasibility of applying traffic restrictions in other cities.”

—From monoxide to dioxide—

The research required several steps. Worden and her colleagues first turned to an instrument developed by NCAR and the University of Toronto called MOPITT (Measurements of Pollution in the Troposphere), which flies aboard NASA’s EOS-Terra Satellite. The instrument’s measurements, analyzed with a new multispectral data product, enabled the researchers to estimate the amount of carbon monoxide in the Beijing atmosphere in August 2007, without traffic restrictions, and in August 2008, during the Olympics.

The researchers then inferred the amount of carbon dioxide emissions by drawing on other studies in Beijing that have measured the ratio of emissions of the two gases at 0.03 grams of carbon monoxide to 1.0 grams of carbon dioxide. They used simulations by the NCAR-based Weather Research and Forecasting model (WRF) to fill in gaps in the observations because MOPITT could not obtain measurements during overcast days. The computer model also enabled the researchers to focus on carbon dioxide emissions from motor vehicles as opposed to other sources, such as factories.

“We knew there had to be some reduction in carbon dioxide from the Beijing traffic restrictions, and this experiment enabled us to find out how much,” Worden says.

She adds that the same study could not be done for this summer’s London Olympics, partly because the surface and cloud conditions in London aren’t as favorable for the measurements of carbon monoxide near the surface from MOPITT. In addition, London is very different from Beijing in terms of pollution controls and it has already restricted traffic in the central city for several years.