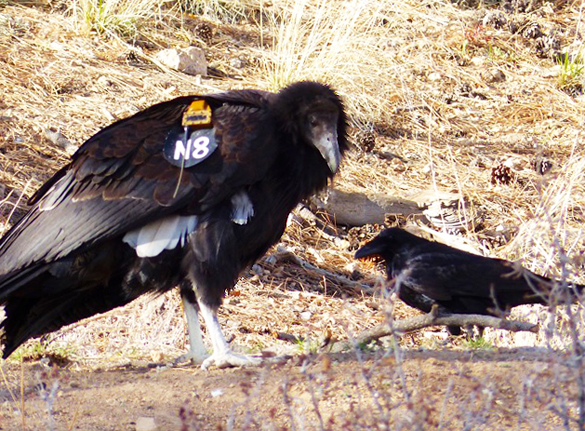 Los Alamos resident Joe Fitzgibbon spotted a rare California condor in his backyard Friday on Arizona Avenue. The condor is shown here with a much smaller raven. Photo by Joe Fitzgibbon 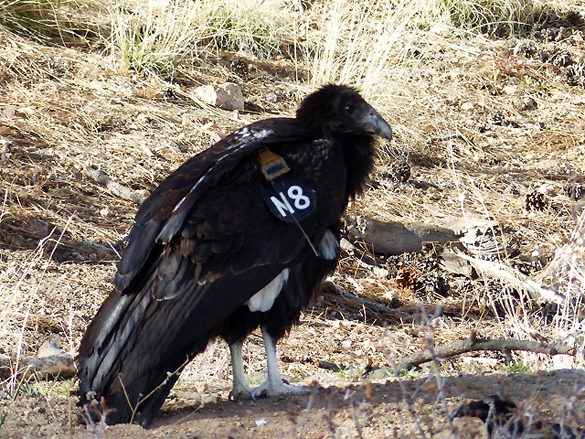 Los Alamos resident Joe Fitzgibbon looked out his window at about 5 p.m., Friday and saw a California condor standing in his backyard looking back at him.

“He stayed for 20 minutes and I squeezed off 90 plus pictures before ravens chased him off,” Fitzgibbon told the Los Alamos Daily Post this morning.

“I’ve been told that the only previous records of California condors in New Mexico are archaeological; no historical records,” Fitzgibbon said.

This sighting was especially exciting for Fitzgibbons because he is an avid bird watcher and serves on the Board of the Sangre de Cristo Audubon Society.

Condors, the largest flying birds in North America, are monogamous and pair for life. They typically breed once every two years, producing only one egg. If the egg is lost, they might be able to lay another. The male and female take turns incubating the egg and feeding the offspring until it learns to find its own food, which could take a year.

Playful and inquisitive, condors roost in large groups and communicate with a combination of hisses, growls and grunts as well as a system of body language. Instead of flapping their wings, which can span more than nine feet from tip to tip, condors soar on wind currents. Like vultures, which are in the same family, they are scavengers, but instead of relying on their sense of smell they watch for other scavengers feeding on carrion.

Adult California condors are almost entirely black. Except for a few feathers, their heads and necks are mostly bare and include shades of pink, red, orange, yellow, and light blue, becoming more intensely pink when they’re excited. It’s impossible to distinguish the males from the females just be looking at them.

Threats to the condor include loss of habitat, shootings, pesticide residue, lead poisoning and collisions with power lines. Ten thousand years ago, California condors lived on both coasts of North America, from British Columbia to Baja California in the West, and New York to Florida in the East. By about 1900, the condor population plummeted and was limited to southern California. Today, designated refuges and captive breeding programs help protect and restore the species.