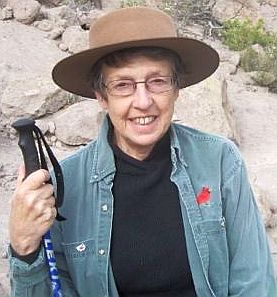 The recent rains have brought a wealth of wildflowers to the Pajarito Plateau including the Quemazon Nature Trail, where I hiked recently.

Quemazon, which is a local Spanish word for “burned”, is indeed that. The entire mountainside was consumed with crown fire in the Cerro Grande Wildfire 12 years ago.

The nature trail was completely restored in the years after the fire by more than 250 Mountain School students and reopened by the County in 2004.

The trailhead is located off of Trinity Drive in the Western Area. Bear left to remain on Trinity at 48th Street and then immediately turn left onto the paved utility road.

Park in the dirt opening on the right near the trailhead signs. Follow the dirt utility road west for the first quarter mile until you pass a green metal gate and water tower.

The trail starts to the left and is marked, “Nature Trail 287A.” 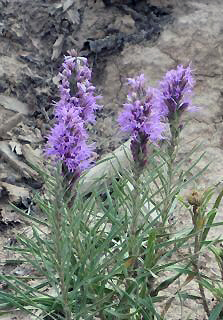 Within 100 feet of leaving my vehicle, I entered the burn scar and was greeted by a low attractive plant with many blue-purple flowers on spikes from 8-14 inches high named Gayfeather.

The small flowers each have long tongues sticking out giving the appearance of being soft and feathery.

The predominant flowers in the burn scar are the many small yellow composites, of which I will mention four. The first I saw was the small bushy plant, Golden Eye (called Golden Aster by Dorothy Hoard), which blooms from mid June until snowfall with small wavy leaves alternating along its stem. Bahia is one of the last of the yellow composites to make its appearance.

While the small yellow blooms look like Golden Eye, the plant shape is very different. 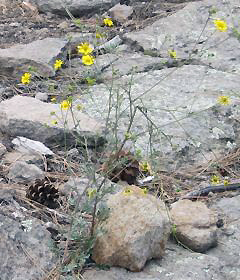 Bahia is a larger plant with fewer leaves and small blooms on the ends of many branching near-leafless stems.  Your sharp eyes may also spot Gumweed, with its curious sticky disk flowers and no ray flowers (petals) at all and several species of Goldenrod.

Further on as the road curves right, you will find an area that contains all the glorious colors together, purple Gayfeather, yellow Golden Eye and Goldenrod and red Indian Paintbrush and Scarlet Gilia (“g” pronounced as “j”) also called Skyrocket. 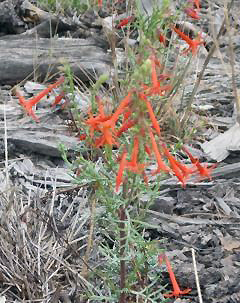 To my eye, Skyrocket is a real showstopper, with its stunning 2-3 ft. tall spikes of small red trumpet-shaped flowers. 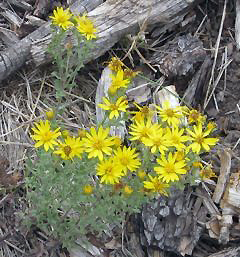 Not far beyond I arrived at the numbered nature trail, which winds its way across the mountain. At marker #3 turn left (east) and count the number of new 1-12 foot Ponderosa pines you can see on the slope below you.

Some are a result of the post-fire reseeding while others are volunteers. Note, there are a few new aspen nearby, some almost 20-feet tall.

At marker #12 I identified Purple Geranium (also called James Geranium), yellow Goldenrod and Bahia all within several feet of the marker.

Past marker #15 the trail skirts Los Alamos Canyon, climbs 50 feet and then turns back right (north) at a Ponderosa with an ugly twisted branch several feet up it’s trunk.

At marker #17 stop and enjoy the spectacular view of the entire Pajarito Plateau, the Los Alamos Canyon Bridge and the Sangre de Cristo Mountains in the distance. 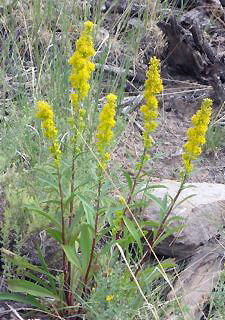 From here the trail immediately switches back and starts a steep climb. Those wanting a vigorous hike should continue a half mile past the last marker (#28), turn right onto the utility road and follow the loop back to the trailhead.

For those who are out for a Sunday stroll, turn back and return to the trailhead parking.

Either path you choose you will have witnessed up close the awesome restorative power of nature here in our own backyards.