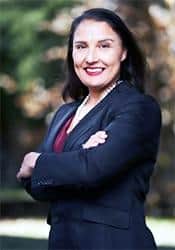 Editor’s note: This is the sixth in a series in which the Los Alamos Daily Post presents the same set of questions to each of the candidates running for Congressional District 3, which serves the northern half of New Mexico.

POST: Why do you believe you are qualified to represent New Mexico in Congress?

JOHNSON: I am qualified to represent New Mexico in Congress because I was born and raised in New Mexico, I graduated from New Mexico Tech with an engineering degree, and I am a strong advocate for New Mexicans. My technical background allows me to advocate for Los Alamos because I understand the necessity of national security and our contribution to providing premier scientific inquiry and results. In my professional career, I was a liaison between government agencies, environmental groups, the public, and energy industries working on complex problems with solutions that considered all of these voices. The Los Alamos community understands that they need a representative who is strong in scientific and economic analysis while creating solutions and working with the interests and care New Mexicans expect from their elected officials. I have worked in the fields of nuclear, oil and gas, and hydroelectric energy and have the experience to be the best advocate for Los Alamos and represent our 3rd District with pride, integrity, and skill.

JOHNSON: My governing philosophy is based on the principles of fiscal and social conservatism. I make decisions based on our U.S. Constitution and reality versus an out-of-touch idealism that we are seeing from our NM elected officials who advocate for socialist policies that only further our dependence on the government and take us away from the ideas of hard-work, self-reliance, and resilience. I want to ensure that government works to reduce ‘red tape’ and bureaucracy standing in the way of new improvements and innovation, while maintaining a high level of environmental responsibility here in New Mexico and in the greater U.S. I believe in a government “For the People, by the People”, and I look forward to returning the power and pride to New Mexicans by providing their voice to Congress.

POST: What would you do to promote the interest of Los Alamos National Laboratory in Washington?

JOHNSON: Los Alamos Labs has a premier resource: our people. We have the best and the brightest people working every day to ensure our national security and scientific research. We need a voice at the political table. I am that voice. I support our nuclear capabilities as a deterrent to governments who do not have the same value set as Americans. The area of national defense is one of great importance now and for any future threat. I support uranium pit implementation while simultaneously working with nuclear non-proliferation measures with other countries. I also see Los Alamos as a gem in the U.S. for the ongoing research and development in science and engineering whose work will enable the U.S. to be a leader in scientific discoveries and engineering solutions in supercomputing, physics, and our space research.

A number of world changing events have their origins in Los Alamos. We must continue our mission to answer our nation’s needs to sustain and better our lives now and in the future. I will advocate for our lab because I understand the importance of funding not only national security goals but also bringing to the world new discoveries for the advancement of humankind.

POST: How would you balance arms proliferation with national defense?

JOHNSON: I am a strong proponent of Theodore Roosevelt’s advice: “Speak softly and carry a big stick”. The United States’ independence, sovereignty, and ability to defend ourselves are all the reasons that America can provide the fertile ground for the American quality of life.  We must have a deterrence from aggressive forces. As we have seen in history, from WWII, to Russia’s annexation of Crimea, to threats from North Korea, and the bombing of Saudi Arabia’s oil fields, we must never underestimate the mindset of those countries whose ambition and/or value set may harm our lives here in the U.S. It is our duty to secure the U.S. currently and for our children.

JOHNSON: My foreign policy goals will be to ensure that Americans are properly represented, and their needs addressed at the negotiation table. The ultimate goal of any foreign policy action I support is to make life better for Americans. We can only have a strong foreign policy if we have a strong economy and world-class education system. Our current unemployment rate is 3.5%. I would continue to work on legislation to deliver job opportunities via better trade deals with other countries that support American jobs.

POST: What do you think should be done about the growing income inequality in the United States?

JOHNSON: I do not believe that it is the government’s place, nor are there positive results, when legislation is enacted, which makes any attempt to “equalize income”. Capitalism is the foundation of American democracy. We are currently living in the greatest time in human history with tremendous amounts of human and financial capital. We need to get back to what this country was founded upon hard-work, grit, excellence, and the reliance of the person on their capabilities instead of looking to government as the answer.  We need to reserve government involvement as a safety net of a civilized society for babies, children, infirm, elderly, and veterans who some of which may need help. The question supposes that people with different incomes is inherently bad. A family can live, such as I grew up, happy and prosperous without government support through hard work. The constant narrative of comparing those who have more to those who have less is not something politicians need to be telling voters. It is true that we have income disparity and education is the key for opportunity here locally and in the U.S.  Education reform is one area that I feel should be strongly advocated for. We always hear how NM is not doing well in education compared to other states and if we do not have any change in our government policies in education, we will receive the same results.

JOHNSON: Healthcare should be a combination of private and public options. It is imperative that Congress and other elected officials work to reduce health related costs such as prescription drugs without limiting the availability of very important medicines. We must have a system where we are able to pay for our medical care through employer programs and seek preventative care. We must consult with our leading advocates in the health industry and our voters to find appropriate solutions to access to healthcare. When people say it is a right to receive free medical care, then we are also saying that we demand for someone to work for free and take the time from their family to work without getting paid or you are saying that you will have someone work x amount of hours per day to provide the healthcare to another family without that same effort. If you are taking money from someone you are demanding that they work for the cause the government has decreed. We as a country need to come to the negotiation table and work on these complex challenges when we use the taxpayer’s money.

POST: Where do you stand on increased regulation of firearms?

JOHNSON: I am a strong supporter of the 2nd Amendment to the United States Constitution which protects individual firearm rights. I must express my opinion that I am against increased government regulation of firearms at any level of government and I am particularly disturbed by the recent “red flag” gun control laws which are spreading across the country, and may be introduced into our state legislative meetings this January in NM.

POST: What programs do you support on immigration to deal with the situation at the border?

JOHNSON: As I travel across NM and speak with parents who look into my eyes and recount how they have lost a loved one to drug addictions, I cannot support an open door on the US-Mexico border. Drug addiction is a travesty that has produced immeasurable pain and suffering. According to December’s Time magazine, in 2017, more than 47,000 Americans died from opioid overdoses. To allow an open door for drugs to flow into our area is not a policy I support. I support a secure border and a legal process to enter our country. I relate this to the front door of a house; we need to have a door in which we welcome immigrants to the US who pass legally into our country and can work for the American dream contributing their hard-work and excellence. Illegal status hurts the immigrant as they must go into hiding and use someone else’s social security number to get a job.

POST: What would you do to combat climate change?

JOHNSON: I must begin this question by stating that I have proudly worked as an engineering consultant for the oil and gas industry in the Permian Basin. Oil and gas have contributed a tremendous windfall of tax revenue for New Mexico which has helped to address many of NM’s most pressing concerns: education, teacher’s salaries, retirement funds, and the economy. To simply cut off this tremendous resource, or to deny its benefits would not be in the best interests of New Mexicans. To push government mandated energy initiatives that do not make economic sense nor contribute to major environmental positive benefits are not policies I support. I do not support putting hard-working New Mexicans out of jobs and using taxpayer dollars to fund initiatives which increase the NM rate-payer’s electric bill, for example, or provide taxpayer money to private industries for their bad business deals. Low cost, high quality, reliable oil and gas is the backbone of the N.M. and U.S. economy as well as national security. As your next congresswoman, I will work diligently every day to ensure a positive economic and national security climate for our country while maintaining responsibility for our environment. Various energy sources should be investigated further and those which are in line with balancing our environmental impact should be furthered such as utilizing our abundant natural gas, geothermal, and next generation nuclear power energy.