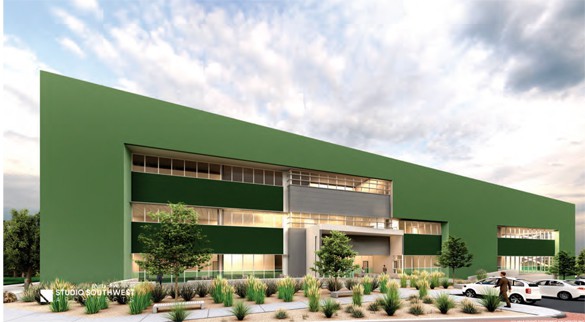 Rendering of the new research building that will be built in the Los Alamos Research Park. Courtesy/LAC

When the New Mexico Consortium sold its building on Entrada Drive to Pebble Labs, it needed a new home. It turns out, the consortium will return to where it originated – at the Los Alamos Research Park.

It may be an old location, but it will be in a new building. The Planning and Zoning Commission approved a site plan and two waivers for the Los Alamos Commerce Development Corporation (LACDC) to construct a new research and development building during its regular meeting Jan. 22.

“It’s an exciting project,” LACDC Executive Director Patrick Sullivan told the Los Alamos Daily Post Monday. “It’s one we have worked on for 18 months now so we’re excited to see it move forward.”

In an interview Friday, Los Alamos County Principal Planner Ryan Foster said the two waivers addressed the height of the building and landscaping in the parking lot. A portion of the building will exceed the 50-foot maximum height restriction because a rooftop greenhouse will extend an additional 12 feet.

Furthermore, the second waiver relieves the LACDC of landscaping the parking lot. Foster explained that the County requires 5-square-feet of landscaping for every 100 feet of pavement. He said it was agreed, as a condition, that LACDC would put in a five-year bond in the amount needed to landscape as insurance that it will be done in the future. Foster said landscaping is not being done right away because the site could potentially have a parking lot structure.

LACDC leases the land from the Department of Energy but will own the new building. LACDC will in turn lease the building to the New Mexico Consortium.

Foster said the new building will be roughly the same size as the current research and development building, which is 83,000 square feet. But while the current building has multiple tenants, the new one will solely house the consortium.

Sullivan said the total project cost is estimated to range from $28-30 million. He added that design and construction drawings are being developed, and optimistically, the hope is to break ground this summer.

Foster added, on the County’s side, there is a 15-day appeal period. If there is no appeal, then a certificate of approval will be issued.

Sullivan said the purpose behind the two research and development buildings is to simulate economic growth.

“The initial goal of the Los Alamos Research Park was to foster economic development and provide a physical building in close proximity to the lab for R&D business that work with the lab,” he said.

LACDC has had success with the Research Park. Sullivan said the current building has been fully leased for the last 10 years.

“There has been a number of companies that have gotten their start in the building,” he said.

The Research Park’s location is valuable because it is close the laboratory’s main campus, but it is not inside the lab’s security fence, so private companies don’t have to address those security concerns, Sullivan said.

Besides catering to businesses, Foster pointed out the new building complies with the County’s comprehensive plan.

“When we look at site plans, there is criteria that needs to be fulfilled,” he said. “And there is support for this project in the comprehensive plan.”

Plus, “The LACDC (can) come forward and say, ‘We got the demand to build this second facility,” Foster said.

According to the agenda documents, the Los Alamos Research Park is an approximately 44-acre property. The first building was constructed in 2001.

The site will be leased to LACDC through 2054. The Master Plan for the research park allows for the construction of five buildings, with up to 450,000 square feet of space.