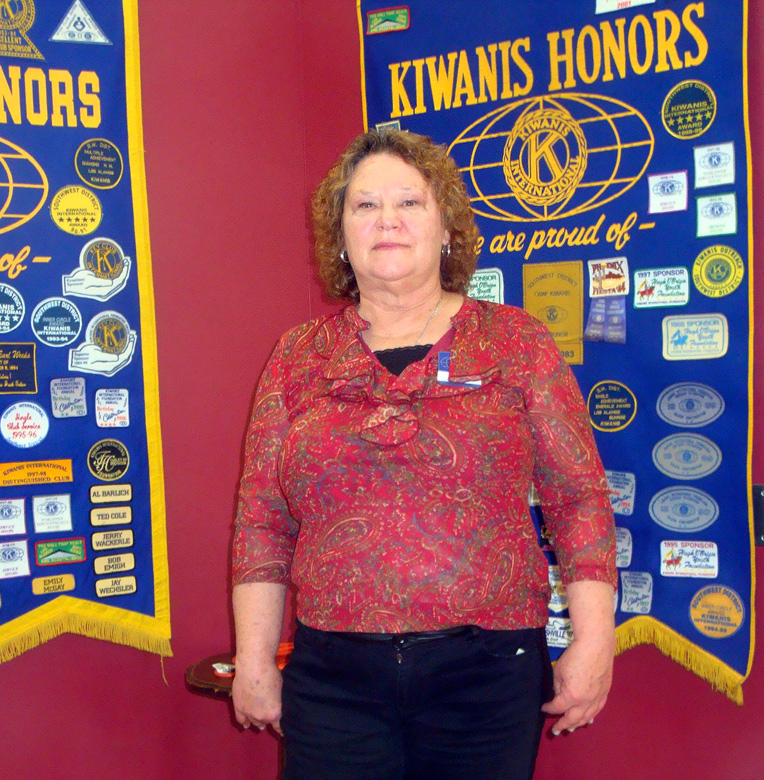 Maple Levine , a member of the Kiwanis Club of Corrales, tells local Kiwanians about Project Eliminate, which seeks to wipe out maternal and neonatal tetanus worldwide. Courtesy/Kiwanis
By CHARMIAN O. SCHALLER
Kiwanis Club of Los Alamos

Kiwanis International joined with UNICEF in 2010 in a worldwide effort to wipe out maternal and neonatal tetanus. Kiwanis and its affiliated youth organizations are now struggling to raise a total of $110 million by the end of 2015, and, meanwhile, UNICEF is delivering the injections that both organizations hope will eliminate a cruel killer.

However, for many people, maternal and neonatal tetanus remains an unknown danger far away. Just why, people wonder, is Kiwanis trying so hard to meet this commitment? What is it about this disease with the long, technical name that makes it such a priority?

Maple Levine, a member of the Kiwanis Club of Corrales, spoke at the Kiwanis Club of Los Alamos March 4, describing cases and showing a film that made this killer disease horribly real to her and to her audience. Her husband, Don, urged Kiwanians in Los Alamos—like those elsewhere—to make fundraising for “Project Eliminate” a high priority.

Maple Levine is a neonatal nurse practitioner with a nursing degree from Kansas City, Mo., and nurse practitioner credentials earned at the University of Arizona. Here in New Mexico, she was instrumental in forming the Newborn Transport Team. She has been a member of Kiwanis since the beginning of Project Eliminate, and she serves as a multi-divisional chairperson.

She is also a Vietnam veteran, and it was during the Vietnam War that she first saw neonatal tetanus “up close and personal.” She later served in Haiti with a disaster-response medical team, managing the care of a tiny baby with tetanus. She also met one nine-year-old in New Mexico who had tetanus.

“I have cared for several neonates and a few adults with this horrible disease, and, unfortunately, I have never seen a survivor,” Levine said.

Tetanus can live in the ground for a long time. Levine said that neonates (babies 28 days old and younger) are particularly susceptible to the disease because it can enter the unhealed stumps of their umbilical cords and go straight to the brain. In some primitive cultures, she said, mothers (often living in huts with dirt floors) are actually taught to apply dirt or dung to their babies’ cords to dry them. A baby exposed to the disease may seem perfectly healthy at first, but on the eighth day, tetanus appears.

The disease kills nearly 60,000 babies (approximately one every nine minutes) and a significant number of women each year. Victims of the disease suffer repeated, painful convulsions and extreme sensitivity to light and touch.

Taking care of people infected with the disease is “hideous,” Levine said. The smell is bad, and one can “hear bones breaking.” She showed a photo of an adult man whose body was bent into an inhuman arch by the contractions he was experiencing. The disease can actually cause tearing of the spinal cord.

The amazing thing is that the cure for the disease was found in 1924. Today, for just $1.80, a woman can receive three shots that make her (and all of her future babies) immune to the disease. Why hasn’t the disease already been wiped out? It’s an issue of money and transport. The rates of infection are highest in countries where the people are poor and live far from medical assistance.

The drive to wipe out this disease started with Dr. Francois Gasse, a UNICEF doctor. He had almost lost hope before Kiwanis and UNICEF teamed up to launch a major attack on the disease.

“What we’re doing is exciting,” Levine said—and it’s working. When Project Eliminate first started, 46 countries had a severe problem. Results from Project Eliminate so far have helped to cut that number to 24. Haiti is still among them, Levine said, and so are Somalia, Chad, Angola, Laos … But, “We’re making progress.”

On Halloween night last October, the Aspen, Barranca, and LAMS organizations went door to door, trick-or-treating for UNICEF, and raised another $235 for Project Eliminate. More recently, a Key Club rummage sale at the high school raised $700 for the project. Add the youth affiliates figures to the money raised by Kiwanis, and the total raised in Los Alamos tops $10,000.

Now the K-Kids organizations are planning a “Skateathon” at the First United Methodist Church to bring in more coins.

The  Kiwanis Club of Los Alamos will hold its second annual “Kiwanis Kentucky Derby Party” May 3 at the Pajarito Brew Pub. Tickets are $50 each, and $25 of each ticket sale will go to Project Eliminate. Tickets will soon be available through all members of the club, and every person who buys a ticket will be purchasing a miracle—providing enough money to purchase shots for 13 women and all of their children.