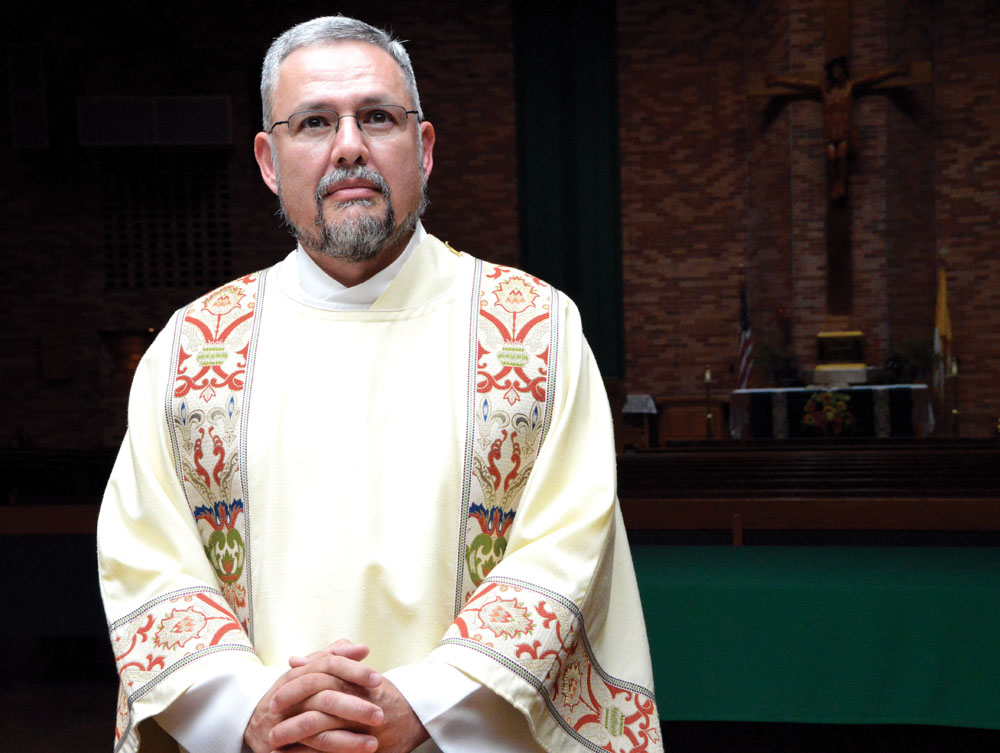 Former police officer Robert Bustamante received the call to become a priest one evening while saying the rosary. He is studying this summer with Pastor Glenn Jones at Immaculate Heart of Mary Church and will be ordained next year. Photo by Carol A. Clark/ladailypost.com
By CAROL A. CLARK
Los Alamos Daily Post

A powerful thought came to Robert Bustamante one evening while saying the rosary: “You will become a Catholic priest.”

“It was very clear and very concise … just that sentence … and the thought wouldn’t go away … it was very persistent,” Bustamante explained during an interview Monday in the library at Immaculate Heart of Mary Catholic Church.

Bustamante is spending the summer at IHM in Los Alamos learning from Pastor Glenn Jones.

“Deacon Robert’s presence here at IHM this summer is most welcome,” Fr. Glenn said. “He’s very helpful, and provides the congregation with fresh views and experiences other than ol’ Father Glenn’s! My hope is to provide him an example and guidance from which he can learn, but that responsibility also gives me even greater desire for introspection to discern how I can improve as a pastor as well, and so his presence is beneficial for our parish in many diverse ways.”

The call to become a priest came to Bustamante in 2006 and his life took many twists and turns before he finally entered the seminary last year.

“I made the terrible mistake of trying to make the decision on my own,” Bustamante said. “I began to have lots of doubts and frustrations so I gave up on the idea for six months but it wouldn’t go away.”

He had intended to speak to his pastor about his call to the priesthood but the opportunity didn’t present itself because his pastor was having health issues. Bustamante didn’t approach the temporary pastors who came and went. He eventually moved and started attending St. Joseph on the Rio Grande Parish in Albuquerque. He made an appointment to meet with Monsignor Lambert Luna.

“Up to this point I had been looking at various religious vocations and they all said I was too old,” said 53-year-old Bustamante. “So that gave me a lesson in starting to understand God’s will. All the other doors had closed but in talking with Monsignor Luna – he agreed it was definitely a calling to be a priest.”

Bustamante then spoke with Fr. Michael DePalma, vocational director for the Archdiocese of Santa Fe. He also met with Archbishop Michael J. Sheehan who gave him advice to build his spiritual life including adoration and daily prayer. He attended a Discernment Retreat held each year for men who are considering the priesthood.

“At that Discernment Retreat I had a second interview with the Archbishop and he asked me if I’d like to attend seminary in the fall,” Bustamante said.

Looking back over his life, Bustamante said he can now see that if someone had talked to him when he was young he might have entered the priesthood sooner.

“Had someone approached me I may have considered it at that time, but as a young man in the military I slowly drifted away from the church,” he said.

He recalled as a boy being an altar server, extraordinary minister of Holy Communion and helping the chaplains his first couple of years in the Marine Corps, where he enlisted after high school and served from 1981 to 1987.

Following in is father Henry Bustamante’s footsteps, who was a career firefighter in Albuquerque, Bustamante went on to work as a firefighter in Orange County, Calif. Budget cuts ended that job so he moved to Albuquerque and went to work for the Department of Public Safety in Rio Rancho.

“At that time the department was very small so we were policemen, firefighters and EMTs all at the same time,” he said.

After a couple of years, Bustamante moved to Portland, Ore., where he served as a police officer for 15 years before an altercation during an arrest damaged his knee.

“After two surgeries the doctor said, ‘No more chasing bad guys for you,’” Bustamante said.

As part of his rehabilitation package, Bustamante went back to college and earned a degree in computer database development and management but was unable to find employment in the field so he took a job with Verizon Wireless in technical support for a couple of years followed by a few security and armed guard positions before entering the seminary last August. He is scheduled to complete the seminary in May 2017.

“My advice to anyone even remotely thinking about the priesthood, diaconate or other religious life – find someone to talk to – your pastor, vocational director or deacon. Anyone of those will be able to direct you to the proper person.”

Bustamante spoke about how his family took the news of his becoming a priest. He has an older sister and younger brother who are excited for him, he said.

“I was raised in the Catholic church so my family was very open to the idea and very welcoming,” he said. “My grandmother on my father’s side always wanted a son who would be a priest so I guess it skipped a generation.”

Bustamante felt it important to express his appreciation to the people in the parishes who pray for him and others entering religious life.

“The seminarians could not do this if not for their prayers,” he said. “The difficulties we encounter, especially spiritually, make it very challenging and almost impossible to do this. So I am very grateful to all the people who have been praying for me over the years … particularly in 2014 when I was diagnosed with a benign brain tumor. Things got pretty bad physically but with their support it has turned out to be a blessing.”

It was after being a police officer in 2006 that Bustamante came back to the church.

“I was raised with the ideal of service so when I was in the police department and fire department what I thought was the greatest achievement was to save a life,” he said. “Now I know there is one step greater and that is to save a soul … that is even more important … so for me, becoming a priest is a continuation of that life of service.” 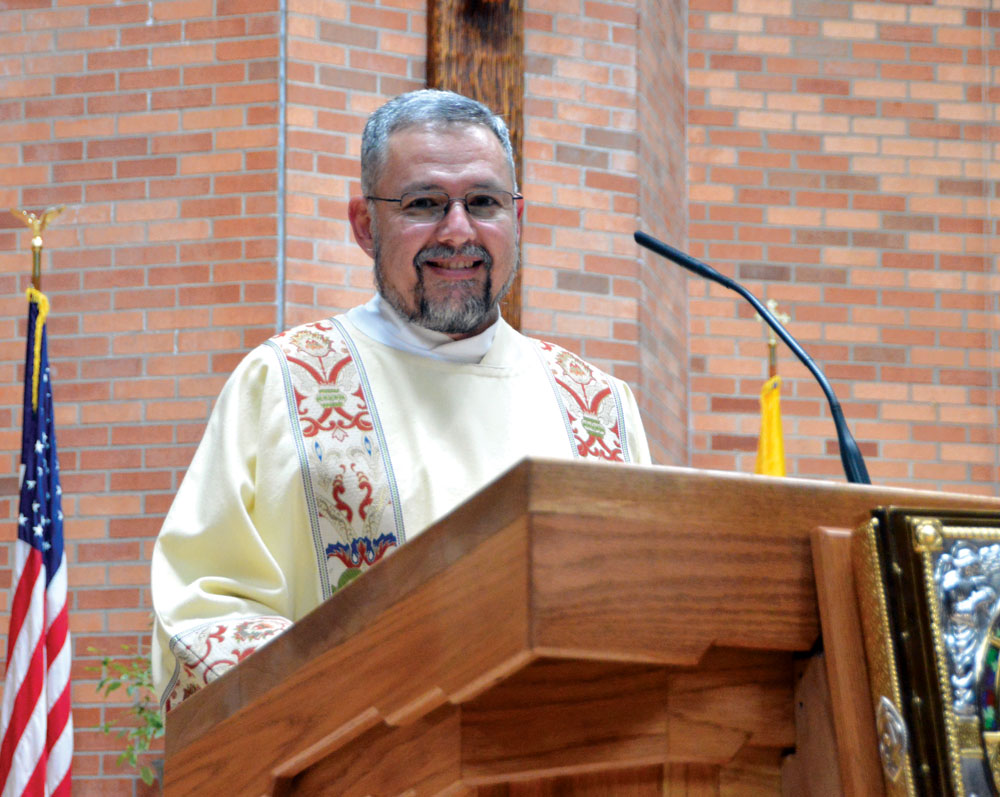 Transitional Diaconate Robert Bustamante on the altar at Immaculate Heart of Mary Church will be ordained a priest next year. Photo by Carol A. Clark/ladailypost.com