Posts From The Road: King’s Saddlery In Sheridan, Wyo. 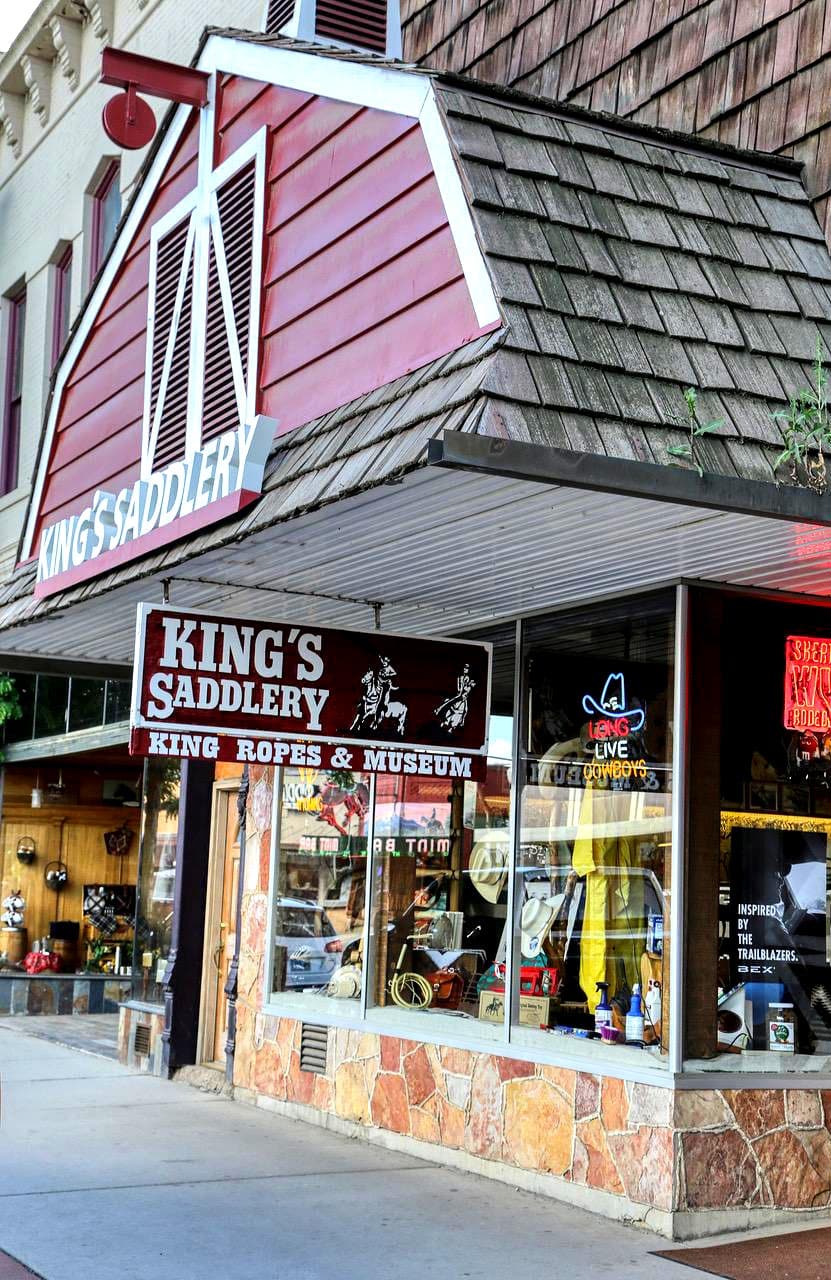 Kings: King’s Saddlery on Main Street in Sheridan, Wyo. We had no idea what to expect and ended up spending hours perusing this amazing store and Don King Museum. Photo by Gary Warren/ladailypost.com 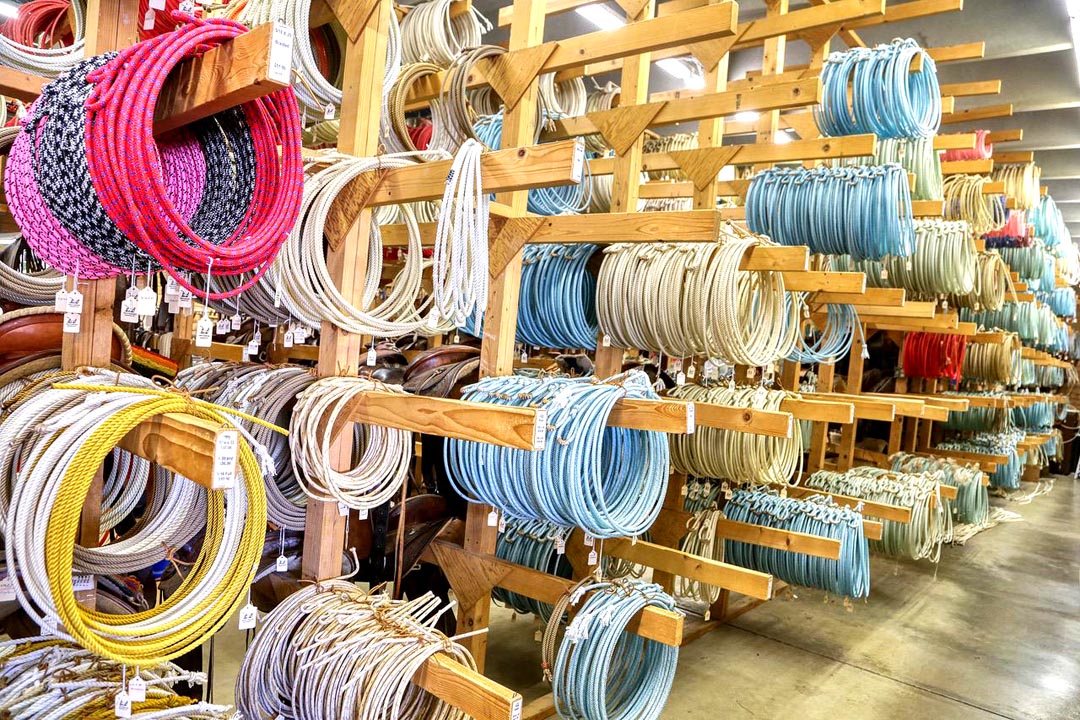 Rope Stock: Aisles of ropes stocked on hangers at King’s Saddlery. The ropes are made on site of various materials. Some ropes are used in daily ranching and others for the rodeo cowboy. Photo by Gary Warren/ladailypost.com 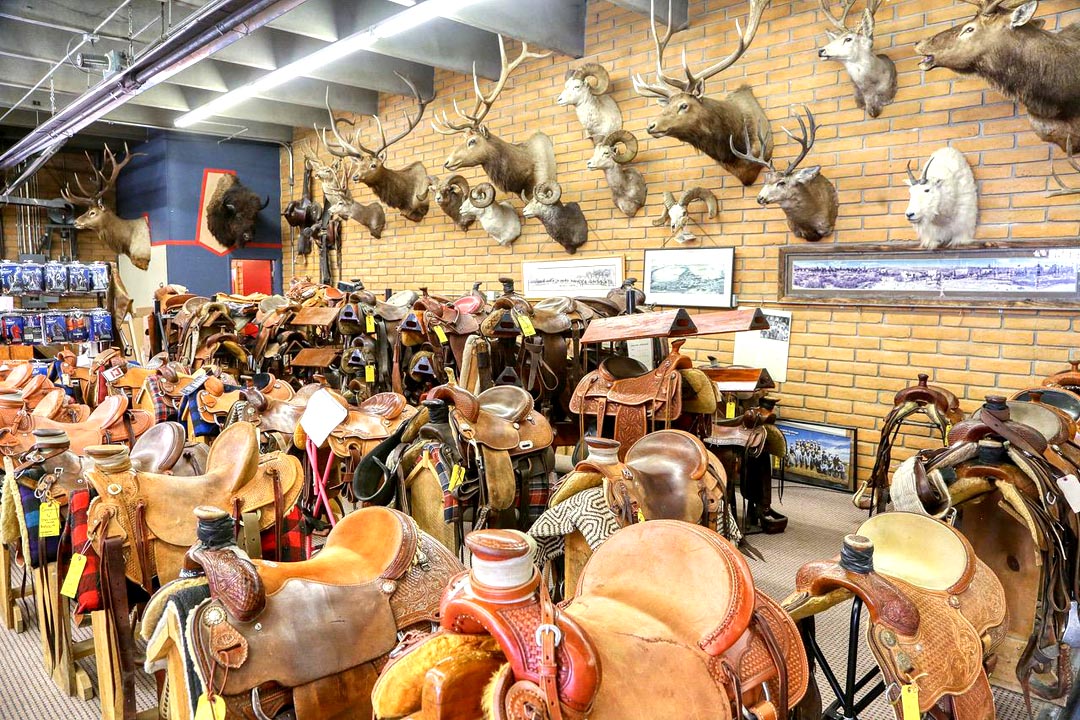 Saddles: Dozens of new saddles are displayed on saddle racks at King’s Saddlery. Saddles sold by the saddlery vary from ordinary to very detailed trophy saddles. Taxidermy also is a part of the business. Photo by Gary Warren/ladailypost.com

We travel to Montana every summer to attend a RV gathering. We really enjoy the rally but the joy of traveling through Wyoming and Montana is the icing on the cake! We enjoy traveling various routes and exploring the two states.

In 2019, we traveled through Sheridan, Wyo. and we wanted to explore the area. As we walked Main Street, King’s Saddlery caught our eye and we had to check it out. Western apparel, some housewares and western gifts and other items filled the retail store. In speaking to employees, they encouraged us to go “out back” and check out the saddles and ropes as well as the Don King Museum.

Exiting through a back door and across the alley was a building which housed the saddle and rope shop. To the side of that building was a door that led into the museum. The quantity and quality of the inventory in each building left us speechless. Hundreds of ropes lined the isles while dozens of saddles sat on saddle racks to the side of the space. The ropes and saddles were all made on site by King Saddlery craftsmen. Located just beyond the saddles was a shop area where leather workers worked around a few shop tables working on leather belts and another woman sat a sewing machine repairing a leather jacket.

We spoke to the workers and admired their talent and craft before moving on to the Don King Museum. The museum was stocked with hundreds of saddles, western carriages and wagons,  Indian artifacts, guns, and many other pieces of western memorabilia. The walls were completely covered with various rodeo photographs, posters, and western art. The space was not big but the impressive inventory was huge. Most of the items in the museum were collected by King’s Saddlery original owner Don King.

Don King grew up in Wyoming living and working on a ranch beginning at a young age. At the same time, King began to learn the craft of leather work. He was always busy with the leather work and in the late 1950s, King began dedicating his efforts toward  leather work and saddlery. In 1963, Don King opened King’s Saddlery in Sheridan, Wyo.

King was a master craftsman with leather tools and actually developed a saddle style known as Sheridan Style. The trophy saddles were crafted for grand prizes at professional rodeos and were sold to world celebrities. The quality of the King Saddles was second to none. The impeccable minute detail of the workmanship stood out.

Don King worked at King’s Saddlery until his death in 2007. King had four sons however two son’s death preceded Don King’s death. In 2019, King’s son Bruce King was the operator of the saddlery. King’s Saddlery has become a legendry supplier of saddles, ropes, bridles, everything for the rancher cowboy and the rodeo cowboy.

Don King has sold saddles to many leaders and celebrities world wide. A few celebrities who have acquired a saddle from King’s include Queen Elizabeth who visited the saddlery in the 1980s, Ronald Reagan, and the Crown Prince of Saudi Arabia and others.

Finding King’s Saddlery was a serendipitous surprise stop for us while traveling to Montana. These are the days we love the most while RVing around the country. We never know what is around the next corner or bend in the road! 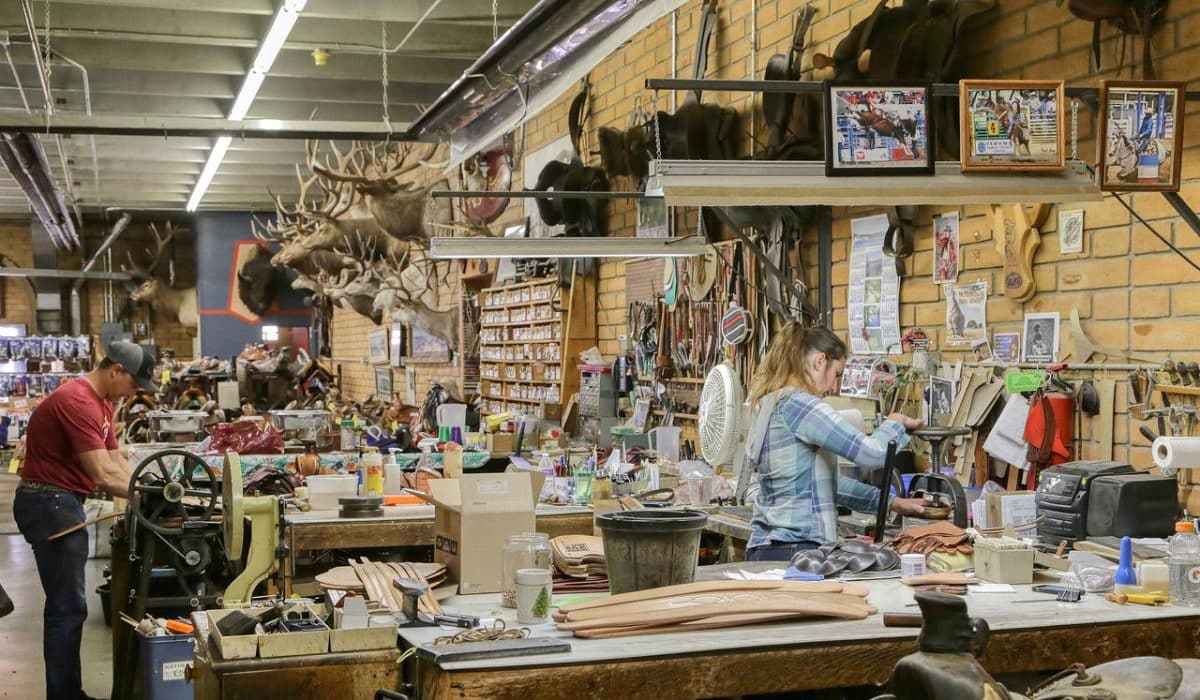 Shop: Workers are  busy with leather work in the shop area of King’s Saddlery. Another worker was at a sewing machine repairing or restoring a leather jacket. The saddles and ropes are made downstairs but we did not see that space. Photo by Gary Warren/ladailypost.com 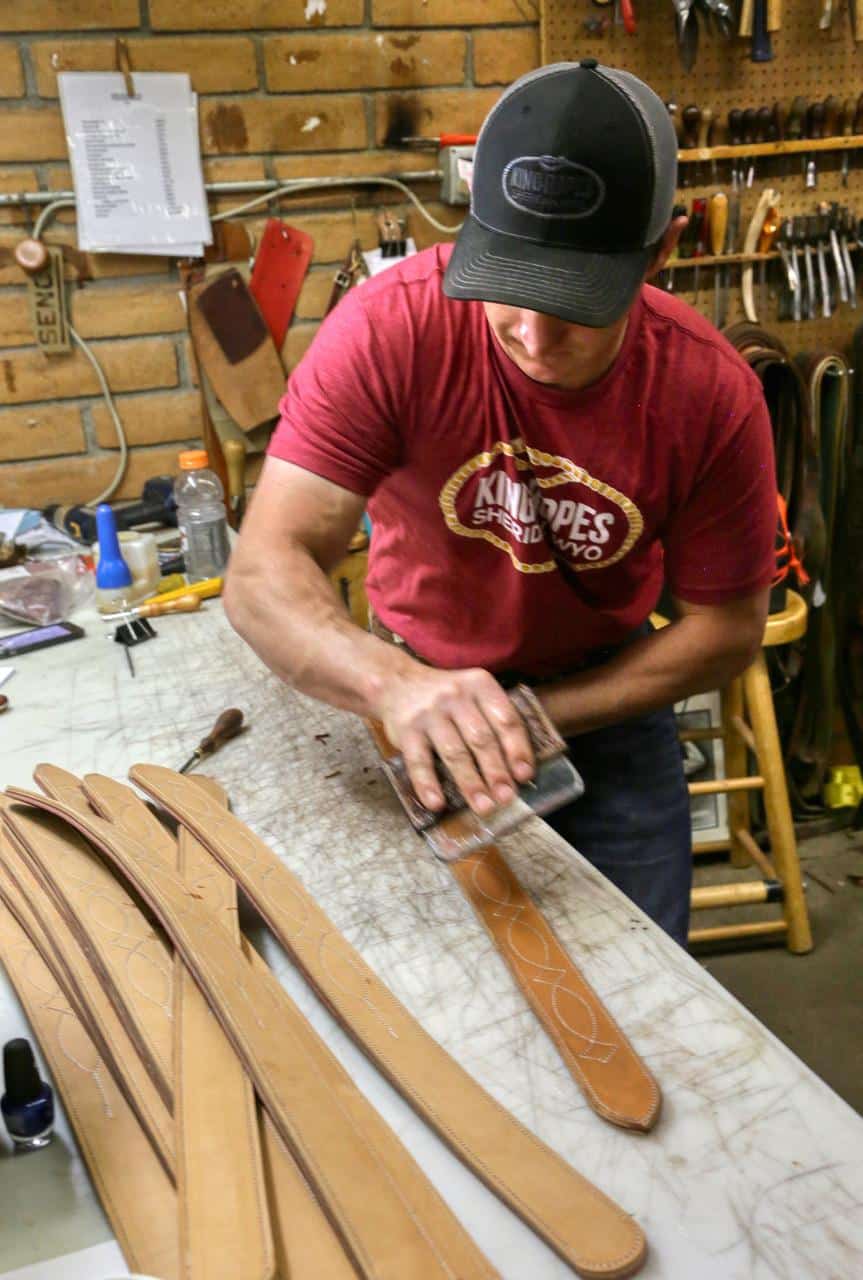 Leather Worker: A worker works with strips of leather that will become belts in the shop. The shop area walls were lined with various tools for use in leather work as seen in this photo and the shop photo. Photo by Gary Warren/ladailypost.com 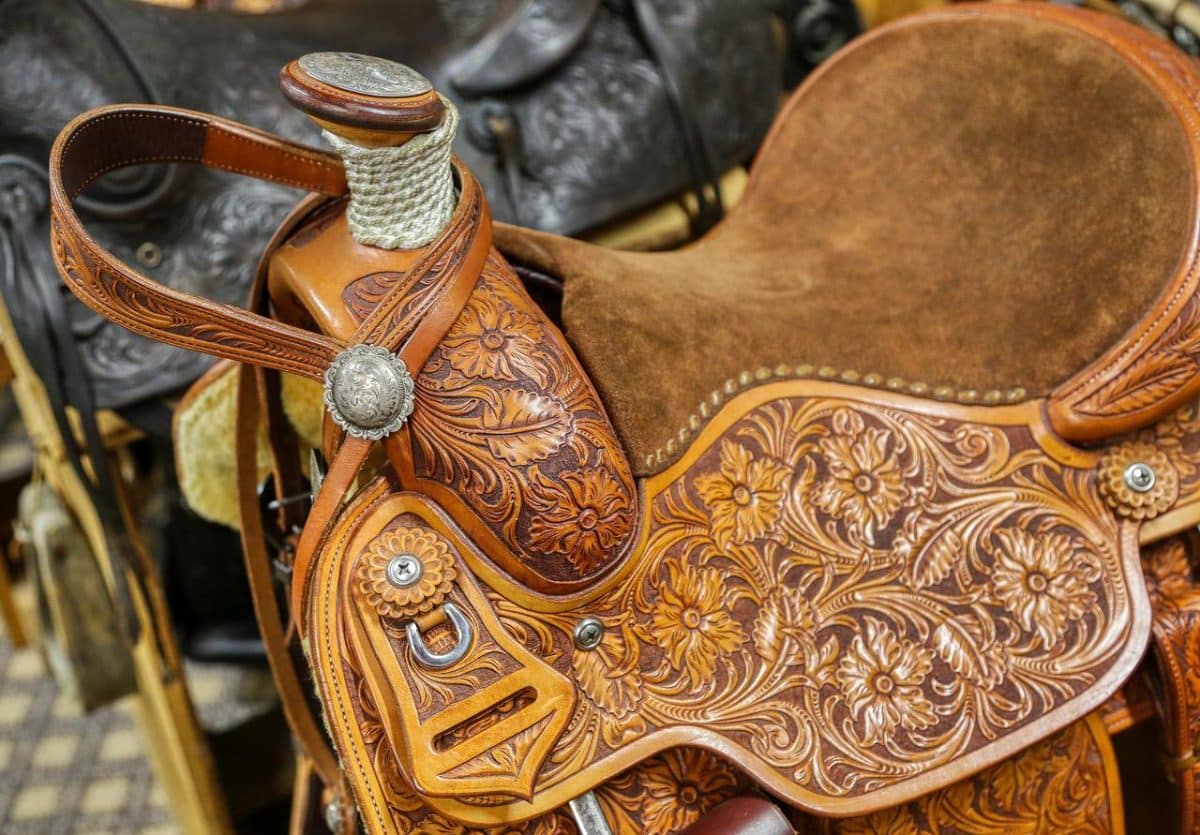 Quality: A detail shot of a saddle illustrates the quality and beauty of the saddles produced at King’s Saddlery. The detail stamping pattern of the flower design is a part of the Sheridan Style saddle made famous by original owner Don King. Photo by Gary Warren/ladailypost.com 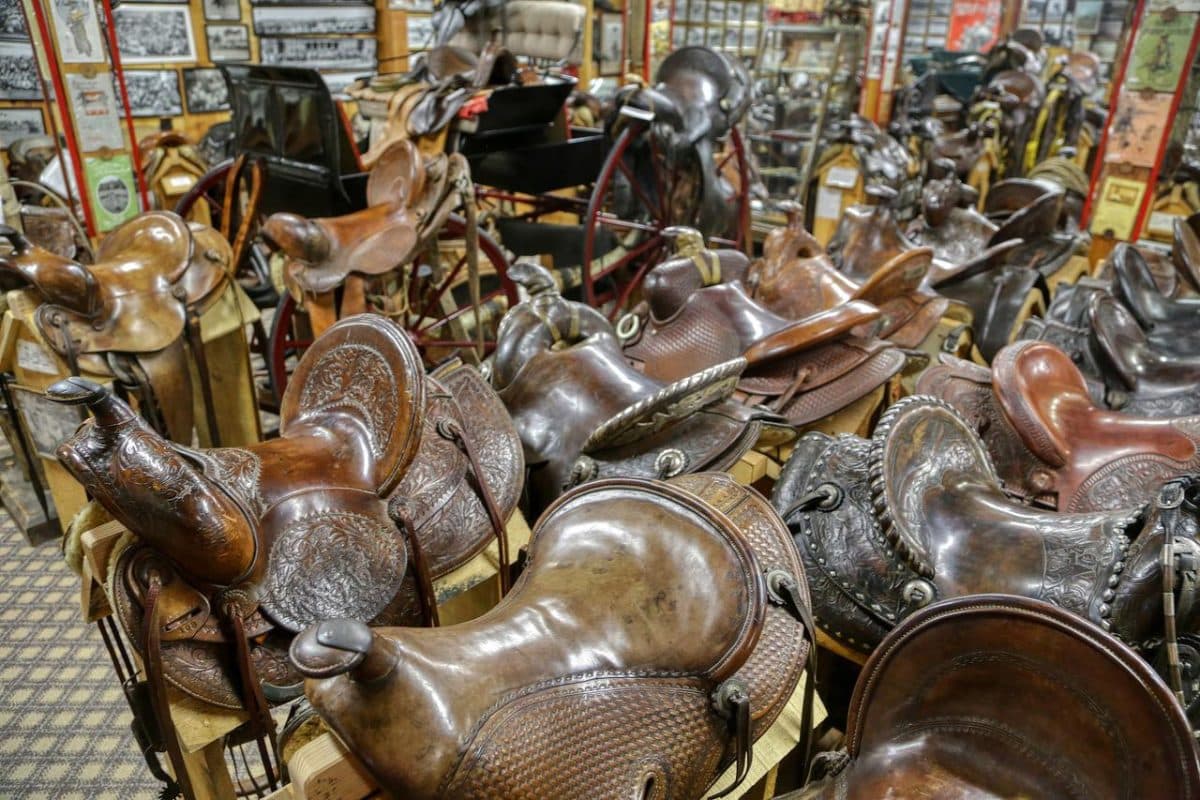 Museum: The Don King Museum is next to the shop and saddle area through an open doorway. The museum inventory is huge and includes almost any western memorabilia imaginable. Saddles, western carriages and wagons,  Indian artifacts, guns and walls of historic photos and posters are just the beginning of the massive collection of Don King. Photo by Gary Warren/ladailypost.com