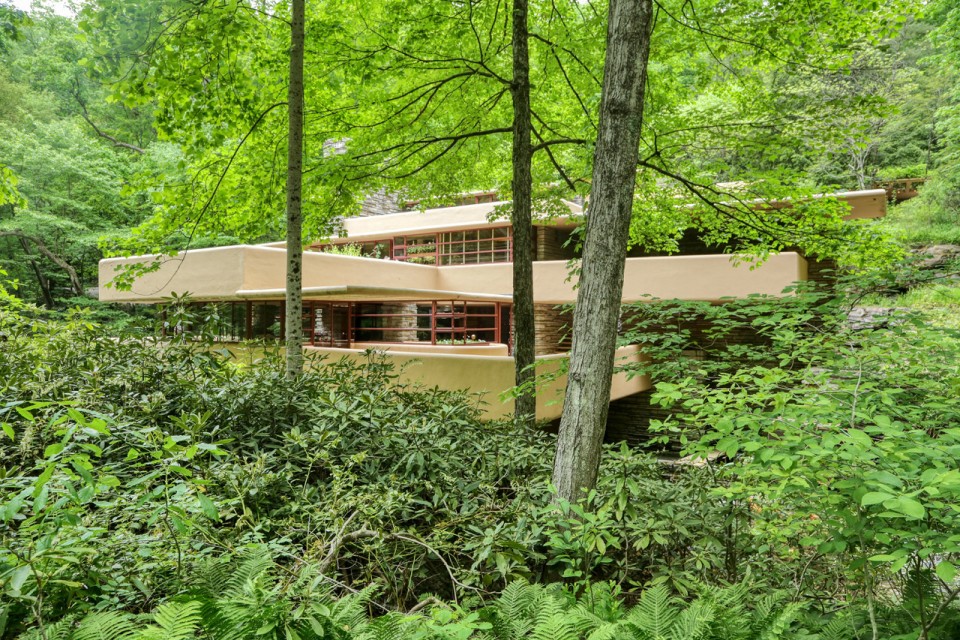 Treehouse: Falling Water appears as a treehouse from almost all exterior angles and directions. It was Frank Lloyd Wright’s intension to incorporate the human element, nature, and the architectural element into one cohesive unit. Photo by Gary Warren/ladailypost.com

When reviewing the works of any great individual, it may be difficult to choose that person’s greatest work or milestones in their career. However, with famous architect Frank Lloyd Wright, it is agreed by most that the house known as Falling Water was not only his greatest residential work but also the project that revived his career in architecture.

Wright was 67 when he designed Falling Water and many of his most famous works took place after this turning point in his career.

Falling Water was designed for Edgar and Liliane Kaufmann of Pittsburgh, Penn., who owned the Kaufmann Department Store. The couple owned property in the rugged mountains of southwest Pennsylvania about 90 miles from the city that included a stream with a 30-foot-high waterfall. They wanted a weekend home or get away from the city and a view of the waterfall was to be the focal point of the retreat.

Wright was a proponent of “organic architecture”, which combined human element, nature (and building site), and architecture for the project. In designing Falling Water, he wanted the Kaufmann’s to live with the waterfall, not just view it from the house.

Because of the lay of the land and allotted space, Wright chose to build the house on a series of cantilevered levels, which were all tied to the rocky landscape with steel and concrete. The center piece of the interior was a large fireplace in the living room, which sat on the actual boulders that formed the water fall and then placed the rooms on cantilevered levels stacked vertically to complete the house.

A contractor was hired, and the construction of Falling Water began in 1935 and was completed in 1937. Stairs from the living room led down to water level and the falls below. Wright’s designs were open concept where the living room and dining area were combined to create a large space. Bedrooms and bathrooms were generally small but functional.

Wright also used ample glass and windows to bring the outdoors inside making it feel like one space. He took these design features and incorporated them into the layers of Falling Water, creating one of the most unique and amazing houses of that day. Falling Water is an architectural masterpiece even today.

At the Kaufmann’s wishes, Falling Water and the surrounding land were entrusted to the Western Pennsylvania Conservancy in 1963. Falling Water opened as a museum the following year. The conservancy continues to maintain and operate the house today. More than 150,000 visitors per year visit this architectural masterpiece in Pennsylvania.

We were fortunate to visit Falling Water in late May 2021. The tour of the house and property was amazing as well as highly informative. The property has reopened following the COVID closure last year and daily tours are available.

Editor’s note: Longtime Los Alamos photographer Gary Warren and his wife Marilyn are traveling around the country and he is been sharing his photographs, which appear in the ‘Posts from the Road’ series published in the Sunday edition of the Los Alamos Daily Post.

Living Room: Frank Lloyd Wright was a genius at bringing the outdoors in and creating a living space that merged with the exterior surroundings. Shown is the living room with the expansive use of glass and windows to make the exterior and interior blend together. Each level of the house also had exterior terraces that allowed people to move in and out seamlessly. Wright also designed much of the furnishings in his houses and Falling Water is no exception. All the built-in furniture is designed into the house plans. Photo by Gary Warren/ladailypost.com

Fireplace: A large fireplace in the living area is the focal point in many of Wright’s designs. Here, the actual rocks forming the waterfall are incorporated into the fireplace hearth as he merged the man-built structure and the natural surroundings. Photo by Gary Warren/ladailypost.com

Dining Area: The dining area at Falling Water is a part of the larger living space. The furniture and cabinetry are all Wright’s design and are built into the structure. Wright included shelves and niches in Falling Water for the Kaufmann’s to display their extensive art collection. Photo by Gary Warren/ladailypost.com