Posts From the Road: Storm In Superstition Mountains 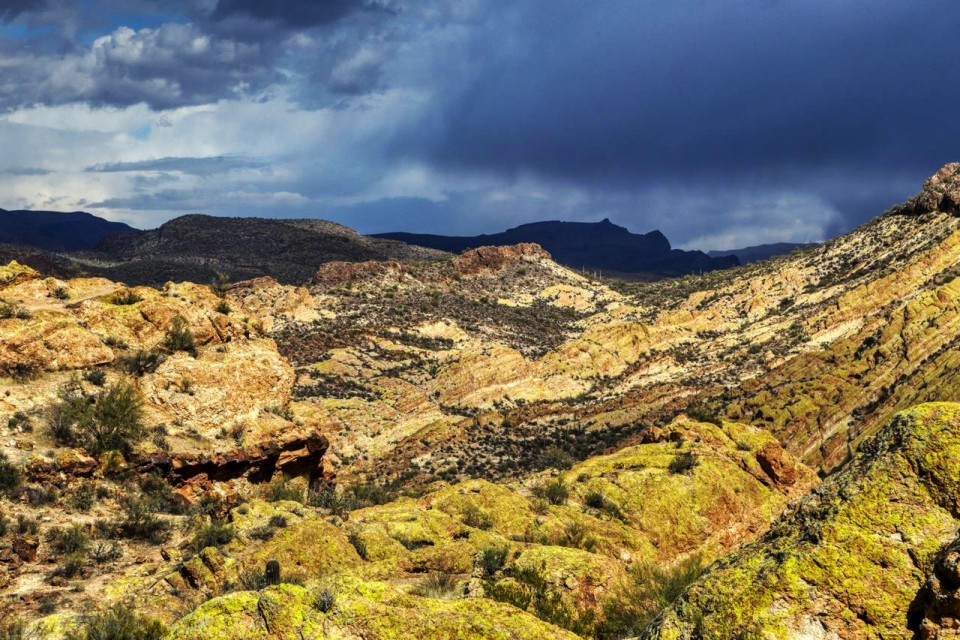 Rocky and Rugged: The rocky and rugged landscape of the Superstition Mountains east of Phoenix, Ariz., offers fantastic views while the thunderstorms in the distance add contrast and drama to the view. Photo by Gary Warren/ladailypost.com

Fish Creek Hill Viewpoint: Colors of the canyon walls and desert peaks were muted by a thunderstorm the day we visited Fish Creek Hill Viewpoint on the Apache Trail east of Phoenix, but views were still fabulous. This viewpoint is the end of the road as the Woodbury Fire and flooding in 2019 destroyed sections of the road beyond this point. That portion of the Apache Trail is closed indefinitely. Photo by Gary Warren/ladailypost.com

One of the most scenic drives in Arizona begins at Apache Junction, Ariz. in the far east side of the Phoenix metro area. The Apache Trail, or Arizona Route 88, offers visitors views of some of the most rugged mountainous country in the state with rocky hillsides and canyon walls hundreds of feet high.

The Apache Trail is 40 miles long beginning in Apache Junction and ending at Roosevelt Dam and Roosevelt Lake on the eastern end. However, the Woodbury Fire in 2019 ravaged through parts of the Superstition Mountains in June 2019 followed by flooding in September of 2019.

The damage from the floods destroyed sections of the Apache Trail and it remains closed indefinitely from Roosevelt Dam to the Fish Creek Hill Viewpoint, a total of about 15 miles on the eastern end.

The drive from Apache Junction eastward to the village of Tortilla Flats and just beyond is paved before turning to a gravel road. This portion of the road is open to the Fish Creek Hill Viewpoint and but remains closed beyond that point traveling east.

However, the portion of the Apache Trail that is open will not disappoint those who travel the road. The road winds its way over and through the Superstition Mountains offering some spectacular views of the rugged landscape. There are three lakes on the drive but only Canyon Lake and Roosevelt Lake are accessible due to the fire damage and washed out roadway.

We recently made the journey from Apache Junction to Fish Creek Hill Viewpoint. The scenery is jaw dropping beautiful throughout the drive. To add some atmospheric drama, there were thunderstorms around the Fish Creek area which created dramatic skies through the entire drive.

If visiting the Phoenix area and have time to explore, the Apache Trail is a drive that will offer a break from the city and some of the most beautiful and rugged scenery in the state.

Desert Color: While the skies were threatening, the color of the wildflowers were dramatic. However, this spring has been cooler than normal and many of the wildflowers normally seen in March were not blooming yet. Photo by Gary Warren/ladailypost.com

Prickly Pears: Prickly pear cactus were abundant in the higher elevations of the Apache Trail. Seen are prickly pears showing off their green skin against a rocky canyon wall in the distance. Photo by Gary Warren/ladailypost.com 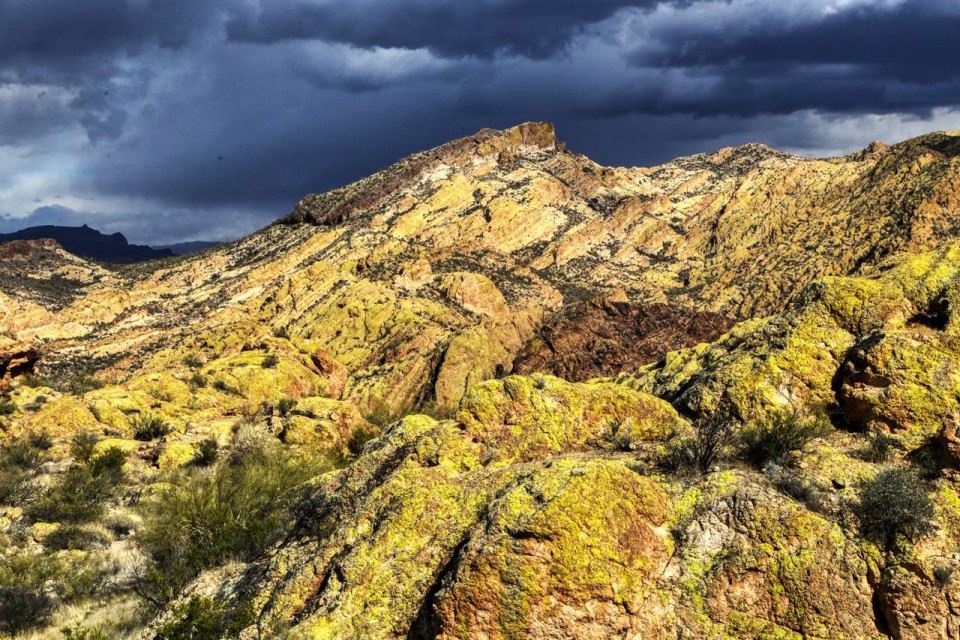 The beautiful yellow and greenish lichen cover the rocky landscape on a stop along the Apache Trail. The thunderstorms in the distance add a dark, dramatic sky against the bright colors of the lichen covered landscape. Photo by Gary Warren/ladailypost.com