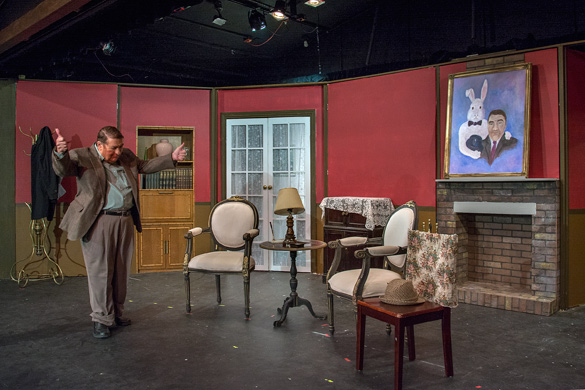 Elwood P. Dowd (Grady Hughes) and Harvey (as himself.) Photo by Ken Milder/LALT 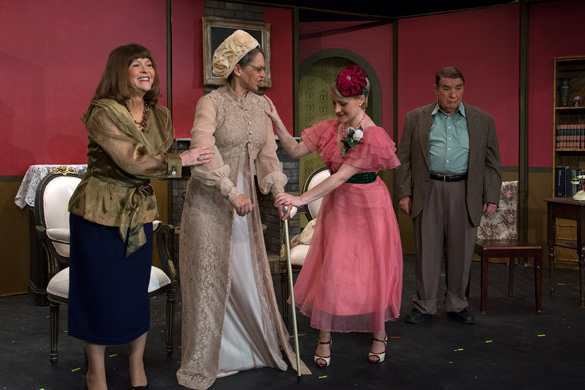 When Mary Chase wrote “Harvey” in 1944, she was hoping to cheer up audiences during WWII. She succeeded admirably and “Harvey” became a smash hit on Broadway, and later a film, starring James Stewart as the sweet, personable and utterly whacky Elwood P. Dowd.

In case someone out there doesn’t know, Elwood is a lovable crackpot, who spends his days in the local bars chatting with anyone who will chat back. Elwood’s best friend is a 6 foot 3 and one half inch white rabbit named Harvey.

Harvey is a Pooka, an Irish spirit who often manifests as a large animal. Except for rare occasions, he is invisible to everyone but Elwood. Elwood is the central focus of the play and actor Grady Hughes has the daunting task of making us believe that Elwood sees and interacts with Harvey, even if we can’t. He also must make us love Elwood in spite of his quirks, alcoholism and possible mental illness. Hughes does a bang up job. 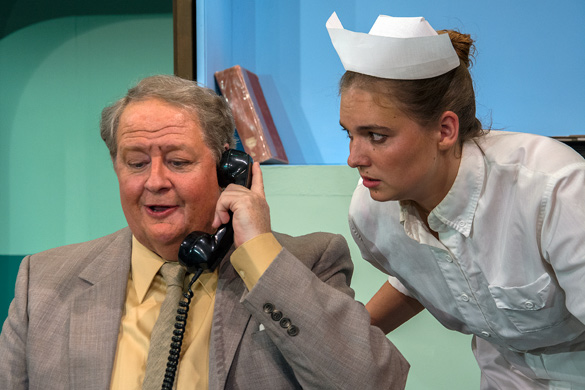 Hughes turns in a stellar performance, backed up by a good cast. Pat Beck brings sympathy and insight to the role of uptight Veta, Elwoods exasperated sister. Tom Farish makes the dislikable Dr. Chumley, who can see Harvey and wants the Pooka for himself, seem human.

“Harvey” soars above some dated humor and passé sex roles because its themes are timeless. Audience members will leave the theater asking themselves what is truly important in life, what is the nature of reality and other tough questions.

Not bad for a frothy little comedy.

Harvey continues today at 2 p.m. and at 7:30 p.m. for the next two weekends on Friday and Saturdays. Go out on the town with Harvey the Pooka. You’ll be glad you did. 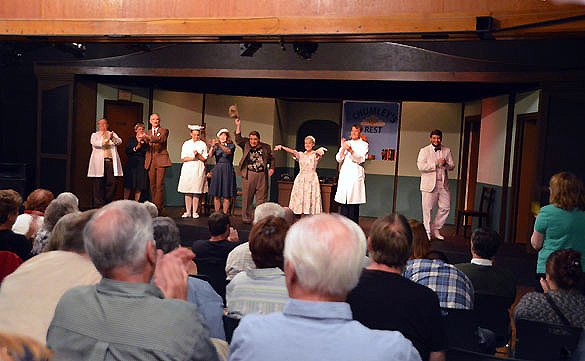 The cast of ‘Harvey’ takes a bow on opening night. Photo by Carol A. Clark/ladailypost.com
Menu
LOS ALAMOS