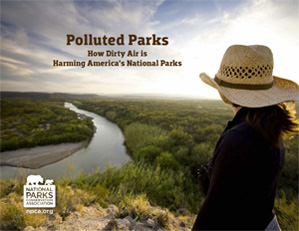 WASHINGTON, D.C. – A new analysis, released today by National Parks Conservation Association, shows that every one of the 48 national parks with the greatest Clean Air Act protections are plagued by significant air pollution problems and climate change impacts.

Fifteen of the parks in the Southwest with these protections rank among the worst for air quality, including Saguaro National Park in Arizona. In fact, air quality in parks can be as bad – or worse – than in some major cities due to emissions from outdated coal plants and other sources of pollution.

Of the 48 parks studied, 36 at times experienced “moderate” or worse ozone pollution according to the Air Quality Index developed by the Environmental Protection Agency. These levels of air pollution are risky for especially sensitive populations such as children who have asthma (roughly one out of every ten children in the United States).

Even more troubling, four parks—Joshua Tree, Sequoia, Kings Canyon and Yosemite National Parks—regularly had ozone levels that are known to be unhealthy for most park visitors.

“As Americans flock to our national parks this summer to enjoy the great outdoors, they expect and deserve to find clean, healthy air. Sadly that is not always the case,” said Ulla Reeves, manager of NPCA’s Clean Air Campaign. “Our parks remain under threat from air pollution, harming visitors’ health, reducing visibility, and driving the impacts of climate change.”

The analysis – “Polluted Parks” – graded the pollution-related damage in the 48 national parks required by the Clean Air Act to have the best possible air quality. The report highlights 12 parks across the nation that earned a D or lower in at least one of three categories – threat to public health, hazy skies and impacts from climate change.

Bandelier National Monument ranked “C” in the report for “healthy air” and “seeing clearly” and “D” for “changing climates”.

Southwestern parks like Saguaro and Grand Canyon in Arizona and Arches and Canyonlands in Utah are not immune to these problems. At Saguaro, natural visibility conditions should allow a visitor to see on the best days 192 miles away. But on its worst air quality days, the views can still be obscured by 50 percent, or we are still missing on average 72 miles of our view.

The air pollution in parks through the Southwest is driven by drought, human development, and an unprecedented surge in oil and gas development. These new sources of air pollution could make the path to natural visibility and healthy air significantly longer and harder to achieve.

“National Parks across the southwest United States are some of our most prized places in the country, but on their worst days, these stunning landscapes are some of the hardest to see – with visibility and air pollution problems that rival some of our biggest cities in the country,” said David Nimkin, Senior Regional Director of NPCA’s Southwest Regional Office. “Tightening rules to clear out park air pollution and to hold these polluters accountable is an essential part of addressing this problem.”

The Regional Haze Rule is the program under the Clean Air Act responsible for protecting air quality in our parks. But due to loopholes in the rule, states and polluters can game the system to avoid cleaning up. For example, Nebraska opted to allow its biggest polluter, Gerald Gentleman Station, to continue operating without basic emission controls, despite a clear demonstration of damage to Badlands and Wind Cave National Parks. If the Regional Haze Rule is not improved, in 50 years just 10 percent of national parks required to have clean air will actually have it.

“Fortunately, this is one of those rare problems with a simple solution,” Reeves said. “With a stroke of the pen, the President can close the loopholes and make common sense revisions to ensure that states and the Environmental Protection Agency are poised in the coming years to restore dozens of our most treasured national parks to clear, healthy air.”

The Obama Administration is expected to revise the Regional Haze Rule before the end of its term. The NPCA analysis recommends that changes must include setting park-centered targets for reducing pollution impacting parks for the next decade, as well as closing loopholes that allow some polluters to escape the rule’s requirements and greater accountability for states to reduce pollution within their borders.

Since 1919, the nonpartisan National Parks Conservation Association has been the leading voice in safeguarding our national parks. NPCA and its one million supporters work together to protect and preserve our nation’s natural, historical, and cultural heritage for future generations. For more information, visit www.npca.org.