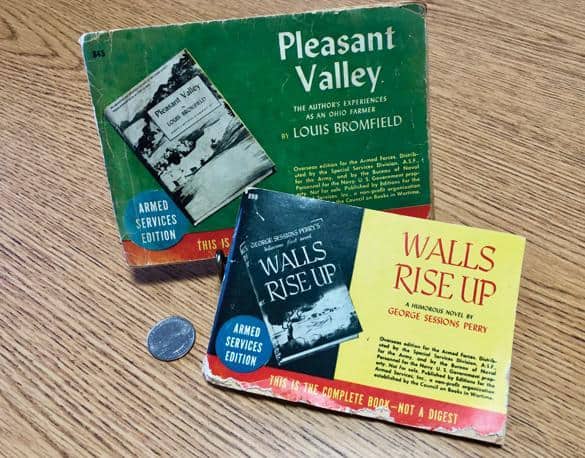 The Armed Services Editions or ASEs were important to the soldiers during World War II and authors considered it an honor to have their books selected  for the ASEs. Courtesy/LAHS

The small, paperback volumes of fiction and nonfiction that were distributed to troops during World War II are little known today, but to the men and women who fought that war, they were tremendously popular and important.

The Armed Services Editions or ASEs are sometimes referred to as “the books that went to war,” but there were at least two other publishing ventures that produced reading material for the troops. “Greetings from the American Red Cross” was a familiar phrase inside the cover of books printed by that organization and issued in a 3 inch by 4 inch size. Even smaller booklets were published by the Pennsylvania Railroad and handed out to enlisted men and women traveling on troop trains in the United States.

The small book size was convenient, fitting easily into a cargo pocket. Unlike the larger paperbacks of today, almost all ASE’s were bound on the short side of the pages rather than the traditional long side because of the printing presses used to produce them. The sizes ranged from 5½ inch to 6½ inch long and 3⅞ inch to 4½ inch high.

Most authors considered it an honor to have their books selected for the ASEs, and many received fan mail from the frontlines, where books were read to tatters. Soldiers overseas received the books while in hospitals, on transports, and as part of the supplies airdropped to their units in war zones. Before the invasion of Normandy, troops amassed in England each received a book as he boarded his invasion transport.

Soldiers wrote home to say that the ASE’s were “as popular as pin-up girls.” Copies were shared, re-read, and sometimes ripped into sections so that they could be used by two or more readers at once.

Many soldiers commented after the war that ASE’s inspired them to continue reading and, in many cases, to pursue further education. Another result of the mass paperback printing was the growth of paperback publishing after the war. Before that time, most books were produced as hardcover editions.

In 1983, the Library of Congress celebrated the 40th anniversary of the Armed Service Editions, “those squat paperbacks distributed by the millions to U.S. servicemen and servicewomen during World War II.” Publishers, scholars, collectors, and readers came together to honor those remarkable volumes. The Library of Congress holds the only complete set of the Armed Services Editions, but partial collections are held by some university libraries and avid book collectors. Copies are sometimes available from online booksellers.

For more information on the ASEs, Molly Guptill Manning’s When Books Went To War (released in 2014) is available at Mesa Public Library.