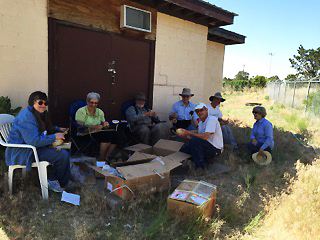 About 15 people worked for three and a half hours June 27, ‘squibbing’ hundreds of shells for the Kiwanis Fourth of July Fireworks. Squibbing involves the insertion of electronic fuses into shells. Kiwanis jokingly calls this ‘a sewing circle with explosives’. From left, Charmian Schaller, Ann Hayes, Roger Stutz, Dennis Gill, John Arrowsmith and seated on the ground in front, Rick Reiss and OpalLee Gill. Photo by Sharon Stover

It takes a lot of work to get ready for the Kiwanis Fourth of July festivities in Overlook Park, but the end is in sight this week—just in time for the Big Day on Saturday, July 4, 2015.

If you wondered about those donation requests at last year’s Fourth of July Event, well … Kiwanis purchased approximately 3,000 shells for $17,500 this year and plans to fire them off in just 30 minutes on the Fourth, starting at approximately 9:15 p.m. (depending on weather, activities on the field, etc.) The size of the show was dictated by the number of donor dollars collected in 2014. 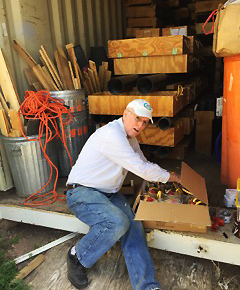 Pat Soran, chairman of the Kiwanis Fireworks Committee, opens a box of shells during a work party June 27 at Overlook Park. Photo by Sharon Stover

It should be a great show this year—and Los Alamos County helps to make it possible by allowing use of the field, and providing police, firemen, and buses.

Kiwanis will be seeking $5 donations from each person over age 12 again this year, and the money collected July 4, 2015, will buy the shells for the Kiwanis fireworks July 4, 2016.

This is one time that you really do get a lot of bang for your bucks!

Pat Soran, chairman of the Fireworks Committee, and another long-time Kiwanis “pyro,” Rick Reiss, have already planned the entire computerized firing program and laid out on Reiss’ basement floor the “rails” that will eventually hold the shells. They have even tested them repeatedly—using light bulbs in the place of shells.

Soran said that on Saturday, June 27, 15 people put in an  intense three and a half  hours, inserting fuses into hundreds of shells. The participants—many of whom volunteer year after year—call this “a sewing circle with explosives.” Soran and Reiss will complete “squibbing,” as this process is also called, on Wednesday, July 1.

At about 11 a.m. on July 4, an army of Kiwanis fireworks volunteers will gather to load shells, mortar tubes, rails, and related equipment onto trucks and move them to the firing line. Once there, they will set up the rails and tubes, make any necessary repairs, and attach and test all the electronics. They will start loading the shells at about 5 p.m. so that they can be ready to start firing just after dark.

And, of course, when the show is over, and all the spectators are heading home, this same army of volunteers will load up all the equipment again, take it back to storage, put it away neatly for next year, and make a first pass at cleaning up the firing area. If the volunteers are lucky (and very efficient), they might be home at midnight.

Meanwhile, Cindy Eaton, chairwoman of the Gate Committee, said Monday night that she was close to achieving full staffing for the donation-requesting process. She still needed just one person to work the 6 p.m. to 8 p.m. shift at the bus gate. (Call her at 662.7073 or 470.1675 to volunteer.)

And Don Casperson, chairman of the Vendor Committee, said he had 14 booths signed up and hoped to have several more by July 4.

Casperson said four more organizations had indicated definite interest in having booths, but hadn’t registered as of Monday, and, he said, there might even be several more … (Interested? Call Casperson at 662.4335, or e-mail him at dcasperson@aol.com ).

Kiwanis President Steve Boerigter, the chairman for the entire event, confirmed the following schedule for the Fourth:

All of this activity requires dedicated volunteers. In some Kiwanis families, members of three generations have participated. Friends and friends-of-friends come to help—because although it’s hard work, preparing for the show is also FUN!

In a recent interview, Kiwanis member Dennis Gill told about how his grandson got interested in the show and started helping—at age 8. When his folks moved to Washington state in 2014, he persuaded his father to come back to New Mexico with him in July—and both of them helped.

Gill said, “I see it as serving the families of the community.” He added that it’s a great way to bring families together. “Oh yeah,” he said. “(My grandson) Jamie and I talk about fireworks practically every time we get together.”

There’s a message there for Kiwanis members and their friends, and the community as a whole, and Kristy Ortega, chairwoman of the Kiwanis Membership Committee, sees that fact very clearly. Although Kiwanis has approximately 50 members, she said, people do move away or go back to college or just drop out. The club is always looking for a few more good members—both young and old.

Many hands make light work of huge projects like the Fourth. Whether you are retired or just starting out in life, she said, “We’d love to find a fit for your volunteer goals and ideas.” Want to join Kiwanis and help with the fireworks and other projects?  You can.

Ortega pointed out that there’s room for you on the firing line, or on the serving line at a pancake breakfast, or at that annual party for Children Youth and Families kids each Christmas. There’s also room for new volunteer ideas … Call her at 505.412.9054, or e-mail her at kristyortega12@gmail.com.