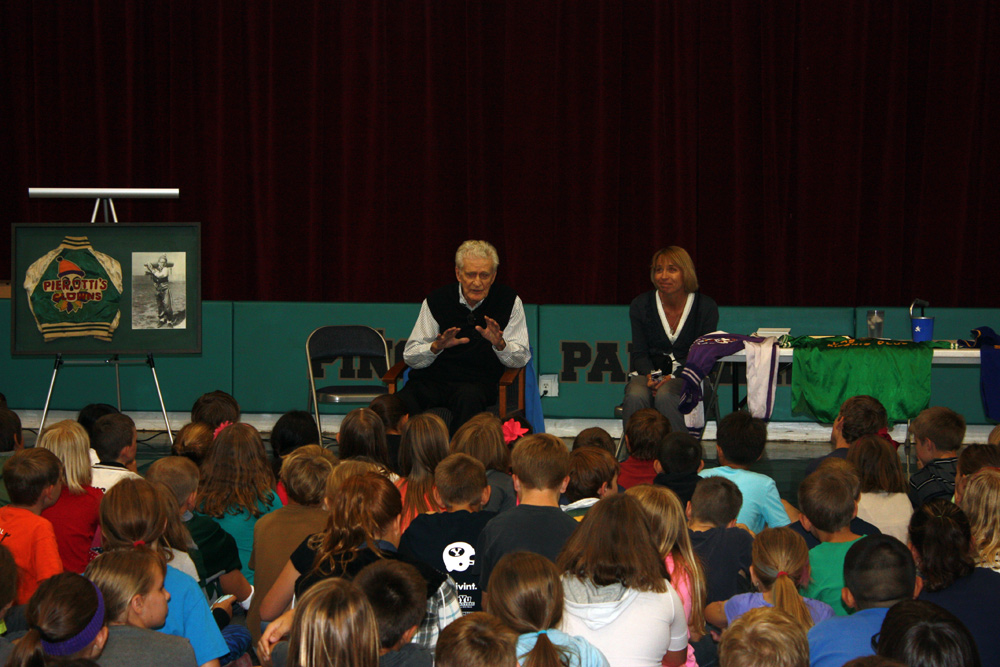 In 1953, Lou Pierotti of Los Alamos formed Pierotti’s Clowns, the only five-man fast-pitch softball team in the nation.

On Wednesday, Sept. 11, Pierotti, now in his 90s, shared the story of the Clowns with fourth, fifth and sixth grade students at Pinon Elementary School in White Rock and answered their questions about the team. 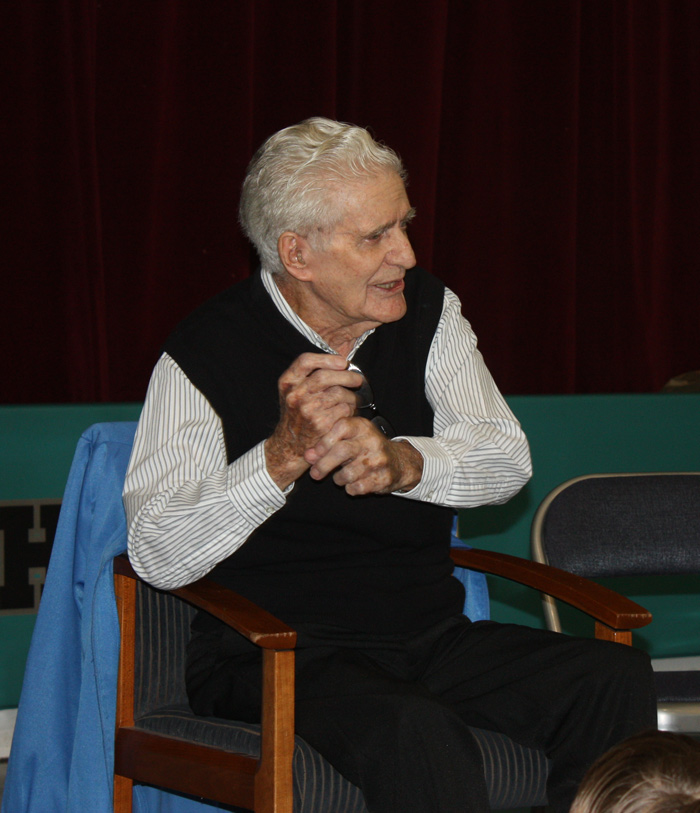 Lou Pierotti swings an imaginary bat as he tells a story about one of the Clowns’ games. Photo by Bonnie J. Gordon/ladailypost.com

“We played against nine-man teams and we won 177 games and lost only 23,” Pierotti said. “In the 25 years the Clowns played, we raised over two hundred thousand dollars for charity.”

This team was sponsored by the Los Alamos Kiwanis Club, for the fun and pleasure of Los Alamos families and later became good-will ambassadors for Los Alamos, Pierotti said.

“We got away with murder because we were clowns,” Pierotti said. “That and having Bun Ryan as our pitcher was how we could win against nine-man teams.”

The Clowns won against professional teams, including the Albuquerque Dukes, he said.

Pierotti explained how the clowns used grapefruits painted white as exploding “mush balls,” used a giant bat carried onto the plate by all five players, caught the ball behind their backs and ate watermelon or threw dice on the sidelines while Ryan struck out the other team. The team had around 40 clown tricks, he said.

Pierotti said the team got used to playing in clown make up and it didn’t interfere with their abilities on the field. Pierotti’s wife helped the team with their makeup.

“We all felt like the makeup was lucky,” he said.

Pierotti showed the students several generations of Clown uniforms. He said his favorite uniform was the final version with the clown design on the back in his signature color, green. Each clown had their own color.

Pierotti said some of the Clowns most memorable games were played at “Penn State,” the New Mexico State Penitentiary, where not only the players on the other team, but the umpires were inmates.

Pierotti urged the students to appreciate their teachers.

“After your family, the most important people in your life are your teachers, he said. “They’ll take you a long way.”