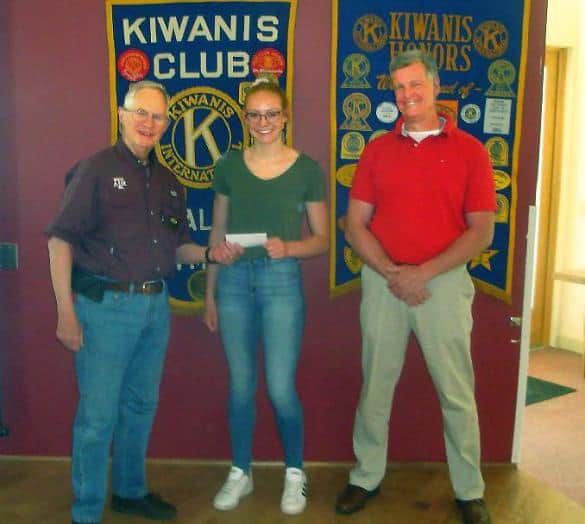 Editor’s Note: Over the next few weeks, the 11 graduating seniors chosen for 2019 scholarships handed out by the Kiwanis Club of Los Alamos will be speaking to the club about their plans for the future. Seven of the scholarships awarded will be funded by Kiwanis itself. The other four are family-financed. While we are looking forward at student plans for the future, it’s also a good time to look back at the remarkable Los Alamos people whose lives inspired the creation of ongoing, family-funded scholarships. We start with the story of Lou and Lee Pierotti. In a second article, we will also have stories on Stephen Stoddard and Jeannette Wallace.

The Pierotti Scholarship, founded in 2016, is named for a family that just about everyone in Los Alamos knew in the 1950s.

Lou Pierotti’s name is still well known in Los Alamos because he was the founder of “Pierotti’s Clowns,” a five-man amateur fast-pitch softball team (sponsored by Kiwanis) that raised more than $200,000 for charity, winning 177 of the 200 games it played over 25 years (from 1953 to 1977).

The team served as a remarkable good-will ambassador for Los Alamos. It made the cover of the very first Sports Illustrated magazine.

Pierotti himself played third base. Bun Ryan, now deceased, was the pitcher.

The names of all the people who played on the team are listed on a plaque in front of a mosaic picture honoring the team—a large, artistic remembrance that stands in front of the Los Alamos Public Library on Central Avenue.

The Pierottis Had a Restaurant and a Store

However, Pierotti and his wife, Lee, weren’t just soft-ball enthusiasts. Their only daughter, Marilee Pierotti Lau, who is a partner in a large auditing firm in California now, has vivid memories of Sparky’s, the restaurant her parents ran near what was once the movie theater in the shopping center downtown.

“Sparky’s was the only restaurant in town when I was growing up,” Marilee recalled in a recent telephone interview. It served breakfast, lunch and dinner. And Pierotti’s Soda Bar was an extremely popular gathering place for years.

Her parents weren’t scientists, she said, but, “They fed all the scientists.”

The Pierottis also had a floral shop downtown, between what was then Clement and Benner (now CB FOX) and TG&Y.

And, she added, her father wasn’t the only one working. Together, he and his wife, Lee, reared four boys and a girl (Michael, Lewis, David, Peter, and Marilee). “I’m the girl on the five-man team,” she said with a chuckle. “I never got to play.”

Marilee said her parents worked side by side at the restaurant, and Lee “did all the flower arrangements for years.”

She also noted that Lou wasn’t the only adult athlete in the family. Lee enjoyed bowling and played tennis and golf. She was the first president of the Los Alamos Lassie League.

That’s why Marilee sees it as so important that the scholarship be called the Lou and Lee Pierotti scholarship.

Lou Still Wanted to ‘Give Back’

Lou died in 2015. The Pierotti children started the scholarship in 2016, she said. Lou “had envisioned giving something back to the community after he passed away,” she recalled. Marilee and her brothers decided on a scholarship that would be awarded by Kiwanis. When they thought of who might win the scholarship, she said, “We wanted somebody who excelled in sports.”

This year’s scholarship is the fourth to be awarded. Jillian Bennett, the scholarship recipient, is a talented pole vaulter as well as an excellent student.

Marilee said she believes that both her parents “would feel extremely proud of the individuals who are getting the scholarships.” She also believes that her father would be pleased that they could “give back” even after his death.

Look at the list of players on the plaque near the library and you will see that there are two Pierottis on the list. The second is Michael, Marilee’s oldest brother. She suggested that he might have an interesting perspective to share—and he did.

“I was the bat boy,” Michael said in a telephone interview. “I was eight years old when they started in 1952.” He started playing first base when he was in high school, he said, and played until he was 28.

“Many, many players had filtered through the team,” he said, but he was amazed at how long his father and Bun continued to play. They were the mainstays of the team, he said.

Asked if any of the Pierotti children became athletes, Michael said, “not professionals.” However, he himself went to the University of Albuquerque (then called St. Joseph’s College on the Rio Grande) on a tennis scholarship, but when he was 28, doctors found that he had cancer in his right shoulder, and he had to stop playing. (Fortunately, he recovered.)

Michael worked at what is now Los Alamos National Laboratory for 40 years as a subcontract administrator, serving as a group leader. His brother Lou, now semi-retired and living in Ohio, spent years in bank real estate. David Pierotti is a professor of biology at Northern Arizona University in Flagstaff. And Peter, a lawyer, does legal work for the Albuquerque Airport.

Michael feels that his parents did a fine job raising their children, and now, at age 73, he is proud of what they have accomplished as professionals.

However, he still remembers with obvious delight what is was like to be an athlete playing on North Mesa on what is now called “Bun Ryan Field” (near the horse stables).

The games drew “very good crowds,” he said. It cost just 25 cents per ticket to sit in the bleachers, and, “It was wonderful entertainment.” Hundreds of people filled the stands, and others parked their cars on a berm nearby and watched from there.

The scholarship winners chosen today would probably have enjoyed those games, too. Jillian Bennett telephoned Michael to say thank-you before he had a chance to call her. He was very pleased that she called, he said, and he told her “what a wonderful job” she was doing—as a student and as an athlete.