Pick Up On ‘Dead Man’s Cell Phone’ at LALT 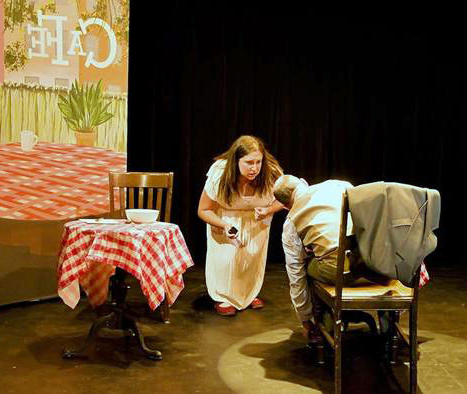 What does it mean to connect? That’s the question posed by playwright Sarah Ruhl in her offbeat comedy “Dead Man’s Cell Phone.”

Jean (Kate Ramsey) is calmly eating her lobster bisque in a café when she is disturbed by a ringing cell phone. She asks her fellow diner to answer it or turn it off, but he doesn’t respond.

It turns out he has a very good reason for his impolite behavior—he’s dead.

So begins Jean’s odyssey into the life and death of Gordon Gottlieb. She feels compelled to answer his phone—and keep answering it.

She promises to stay with Gordon “as long as he needs her” which turns out to be long past his expiration date. Jean longs to bring comfort to his survivors, so she figures out exactly what they want to hear. She constructs the Gordon they all wish they had known.

Jean’s need to connect to Gordon’s life allows her to pass seamlessly into the lives of these strangers.

His wacky foul-mouthed mother (Claire Davis), his wife uptight wife Hermia (Pat Beck) who is set free by his death, his sophisticated mistress (Jeanne Adkins) and most importantly his endearing and awkward brother Dwight (Eric Bjorklund).

Dwight turns out to be the polar opposite of Gordon. To Dwight, things must be written down to be remembered and his work in a stationary store gives him a passion for the written word, while Gordon seems to have done most of his communicating by cell phone.

Eric Bjorklund plays both Dwight and Gordon, switching back and forth between these dramatically different personas. It’s a delight to watch this actor become one brother, then the other.

We seldom get to see the same actor become a totally different person in the same play. Bjorklund does a wonderful job as both brothers, bringing both characters to full life on the stage.

Kate Ramsey is terrific as the caring yet conniving Jean. Half in love with the Gordon she’s constructed in her mind, Jean is also drawn to Dwight.

When she finally meets Gordon (I’ll let you find out how for yourself), she’s in for a real surprise.  He’s nothing like the character she’s created, or is he?

Ramsey makes us identify with the hapless Jean who seems to have no life outside of Gordon’s. The one fact we know about her is that she works at the Holocaust Museum.

How the dead are remembered is one of the themes of the play. Jean is a liar, delivering patent untruths to Gordon’s loved ones, however in telling them what they want to hear, she brings them comfort and perhaps tells them secret truths that Gordon kept, not only from them, but from himself.

Cell phones may make communication less personal, but it is through Gordon’s phone that Jean achieves connection. The various ways we communicate, or don’t, are at the heart of the play.

The minimalist set design is effective, including such touches as the reappearance of Gordon’s urn in several scenes. The costuming captures the characters perfectly.

Join the outstanding cast of “Dead Man’s Cell Phone” as they negotiate the pitfalls of achieving connection to each other.