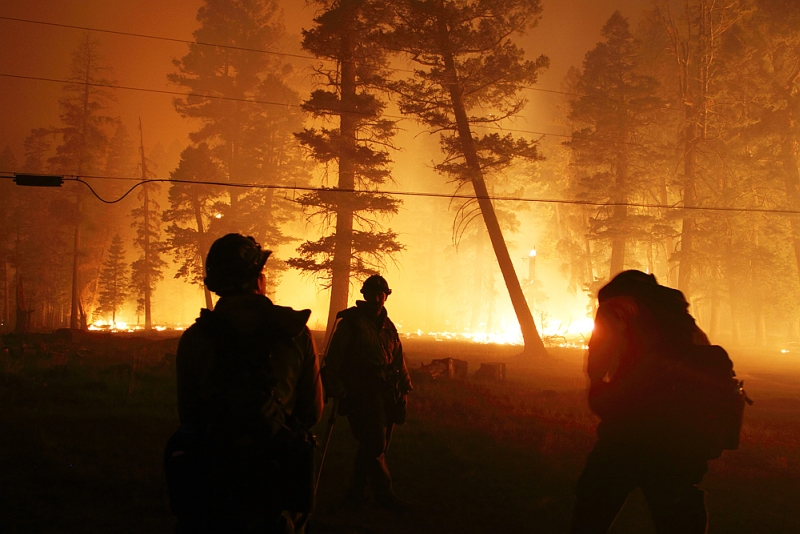 Like many of you, I was in complete shock after hearing initial reports of 19 fatalities on a fire in Arizona last Sunday.

After a little investigating, I realized the fire was near Prescott, home base of the Granite Mountain Hotshots, and that they were assigned to the fire. My heart sank. A few hours later, news reports would confirm what I had feared; all but one member of the elite hotshot crew had perished in the fire.

I had the distinct honor of working along side the Granite Mountain Hotshots on the Thompson Ridge Fire in early June. I was hired by the Valles Caldera to photograph firefighting efforts to save the historic cabins and old growth trees at the ranch headquarters, and I was partnered with one of their squad bosses for the night. Serving as my unofficial escort, he kept watch over me throughout the operation, ensuring my safety and using every opportunity to teach me about fire.

On one occasion, the squad boss stopped me to attach a glow stick to my hard hat so I would not get run over while taking photos in the road. Another time he reminded me of the hazards of working around snags and being aware of one’s surroundings. When dawn broke later that morning and hazard trees were being removed, he provided me a narrated play-by-play of how to properly fell a tree. Although having “media” on the fireline is sometimes seen as a distraction, the squad boss made me feel completely accepted and part of the crew that night, going out of his way to keep me safe and informed.

Although I spent only the one evening with the crew, I was extremely impressed by their professionalism and knowledge. Most of the crews working the fire that night were from Arizona, and there was a close camaraderie among them. Under intense pressure from a rapidly expanding fire, the division of about 80 firefighters executed the burnout operation with extreme precision. Communication was phenomenal; tactics were on target; and execution was flawless. Protecting wooden structures from a firestorm of embers is no small task, and yet not even a single fence post was singed that night, much less a cabin. They were true professionals in every sense of the word, and I was honored to have been witness to such a carefully orchestrated defense.

I think former hotshot Jesse Sievers summed it up best in a letter to the editor during the Las Conchas Fire of 2011. He wrote, “One of the last, true, dirty, gritty, gun-slinging jobs in the United States is that of a wildland firefighter. These firefighters slip into the community as a shadow, relatively unnoticed and unconcerned with the spotlight eyes of the media… These wildland firefighters are the crews that do the backbreaking line construction for 16 hours at a time, grab a bite to eat, and start again in another eight hours until the fire is out… These are the folks who slip in as a shadow and leave without anyone knowing their names (Los Alamos Monitor, July 5, 2011.)”

May we never forget their names or take for granted the ultimate sacrifice made by these brave and selfless men. Rest in peace those who were lost, and comfort for the surviving crewmember who was spared to continue the work that lay ahead. 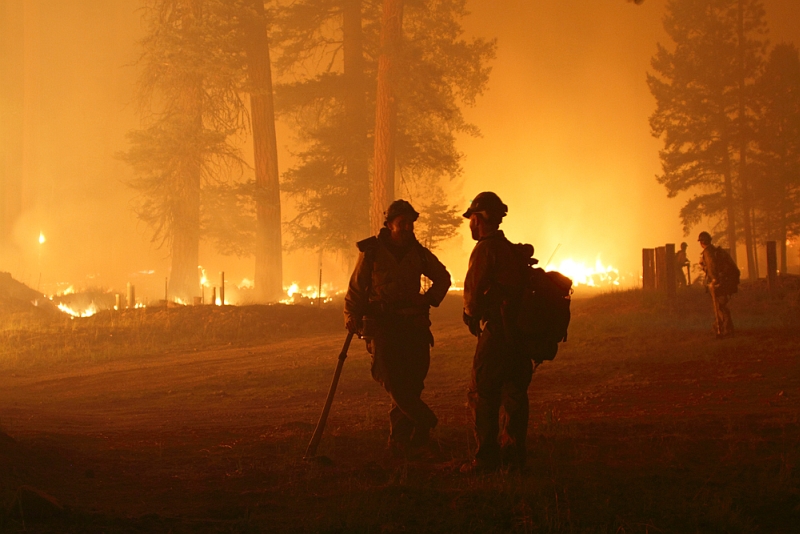 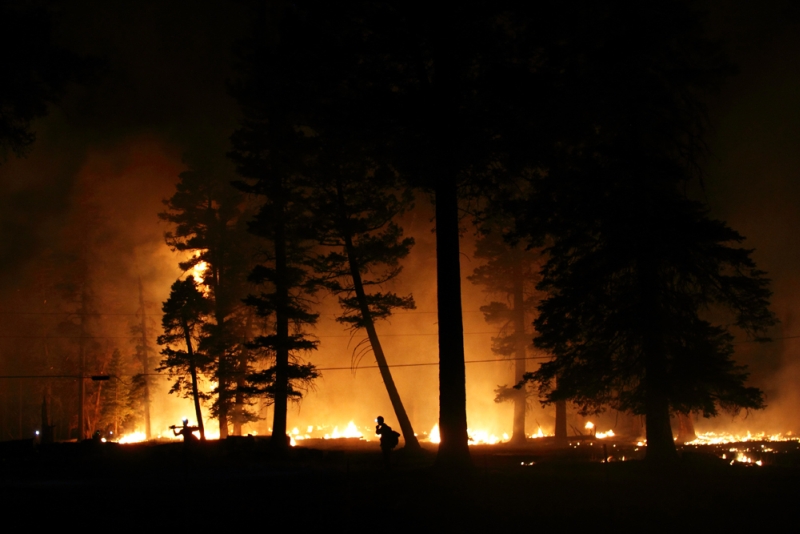 Members of the Granite Mountain Hot Shots keep their ‘eyes to the green’ looking for spot fires that might ignite outside the fireline from flying embers. Photo by Kristen Honig/Valles Caldera 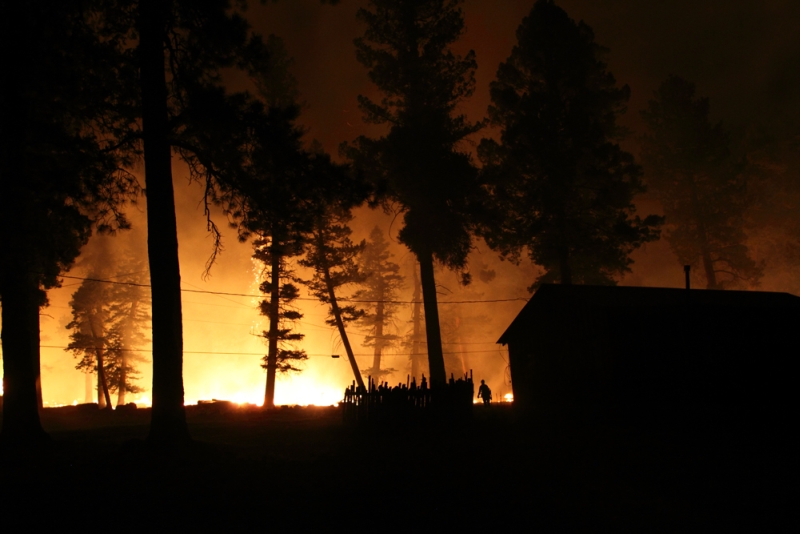 A Granite Mountain Hot Shot keeps watch over one of the historic cabins on the Valles Caldera National Preserve, periodically hosing down the wooden structure from a pre-positioned hoselay. Photo by Kristen Honig/Valles Caldera 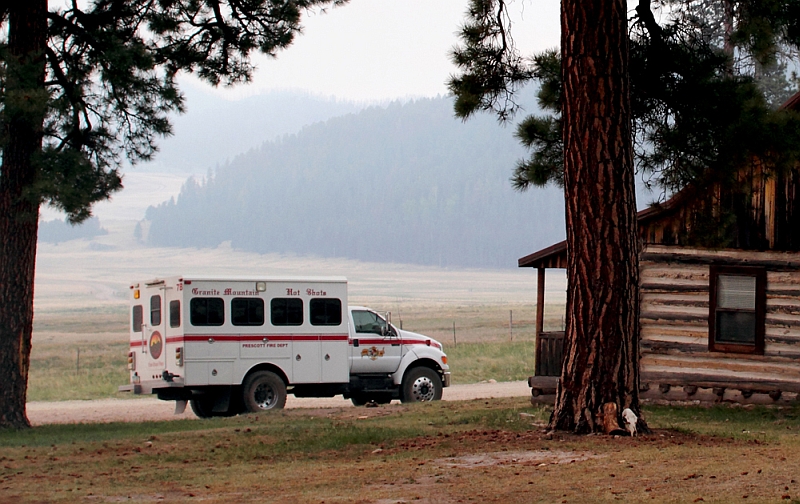 The Granite Mountain Hot Shot’s crew carrier is seen parked next to one of the historic cabins they helped protect on the night of June 4, 2013. Photo by Kristen Honig/Valles Caldera