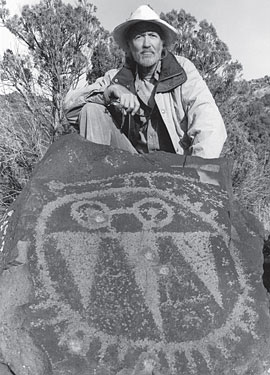 Have you ever looked at a piece of art or read a book and wondered what were the circumstances leading to its genesis?

In his newest book, “In the Places of the Spirits,” photographer and author David Noble gives readers the inside scoop on his art.

He also will share his story during the Authors Speak lecture at 7 p.m., Thursday at Mesa Public Library. The creation of his newest book is no short story. It actually spans 30 years.

Noble said he became interested in photographing the Southwest in the 1970s. He was hired as a photographer by the School of American Research to document the excavations at the Arroyo Hondo Pueblo.

The idea for the book further progressed while Noble was taking photographs for his guidebook, “Ancient Ruins of the Southwest: An Archeological Guide.” He said he realized the sites he was photographing had “a lot of potential as fine art photography.”

“These landscapes with history and culture incorporated, were just beautiful and had so much photographic potential for art,” Noble said.

He also was so impressed with how the landscape and the architecture complimented one another.

Not only did he create a fine art photography book on the sites but he also included personal and explicative text along with the photographs. Noble said weaving in personal narrative is a new avenue for him after writing historical books.

“The writing in this book has been a joy because I’ve been able to write about my own feelings and experiences,” he said.

One experience that sticks out to Noble was in Velarde. The weather was stormy and cloudy and the light was not good for taking photos. As a result, Noble said he decided to sit and wait to see what would happen. He had one frame left when suddenly the sun broke through the clouds on a valley where there were a few horses.

“That made the picture,” Noble said.

Getting a good photo is a matter of knowledge and experience, but it also is a matter of luck. Getting the chance to photograph this scene in Valarde “was a gift from the spirits.”

This and the many other stories and photos in the book were collected during the span of 30 years. Having finished the book, “I felt both joy and relief,” Noble  said. “I feel it’s my book.”

This work has a personal connection, so it is not the same as writing science or history, he said. “This is a book that tells my story.”

How Noble started in photography is another interesting story. He explained he was in the military service in Vietnam and was stationed in the highlands with local tribes. He had his mother’s pre-World War II camera and during his time off he would take pictures of tribal members, get the photographs developed in town, and then give the pictures to his subjects.

It was also during this time that Noble met Christian missionaries interested in photography. “I got quite inspired by that,” he said.

Noble’s photography has taken him many places and introduced him to a lot of people. For instance, while working for a newspaper in New York City, Noble covered a construction site and became friends with the Mohawk iron workers at the site. In fact, the steel workers invited him to journey up the building’s steel frames to take photos. Noble said photographing these workers and their building was his first photography project.

Afterwards, Noble and his wife went on the road before arriving in New Mexico.

During his talk Thursday, Noble said he is looking forward to introducing his work to the audience as well as getting their feedback. Staff from Collected Works bookstore will be bringing Noble’s books for signing.